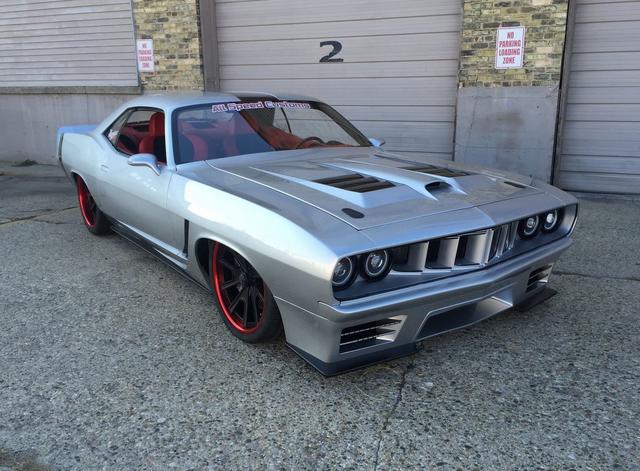 
We've only ever featured one other project car from All Speed Customs, but based on this 1971 Cuda, it's safe to say they like to think outside the box.

This restomod is about a few years and is still flying under the radar. However, the 1971 Cuda is one of the coolest muscle cars of all time, and there's never been anything like this build.

With nothing to go by, we'd say this restomod may have been inspired by the Eleanor Mustang, though we do know of another 'Stang with a similar design. Regardless, it feels way too modern and defies convention.

The first thing we notice is that the Cuda has a body kit. At first, it feels really weird to see a bumper on this car, especially one with air intakes and LEDs. Other stand-out mods include the Corvette-like front vents, extended quarter panels, flush door handles from a real Aston Martin and a Ferrari style rear valiance with the center exhaust.

It's also quite special from a mechanical point of view. It sits on a custom Roadster Shop chassis featuring front suspension out of the C6 and four-link at the back with adjustable coilovers from Penske and counts on 14″ Wilwood disc brakes. Six pistons clamp at the front and four at the rear, thanks to Hydratech power brake assist.

The wheels are custom-made for this car, measuring a massive 20x12 inches at the rear and wrapped in 335/30ZR20 Michelin Pilot Super Sport tires.

The Cuda is known for having a super-sized Hemi, but this one chose to motivate itself using a Dodge Viper V10. It's an older model engine, but reportedly makes 750 horsepower going to the 9-inch rear end via a modern six-speed. The soundtrack goes through the usual 3-inch pipes with cutouts and MagnaFlow mufflers.