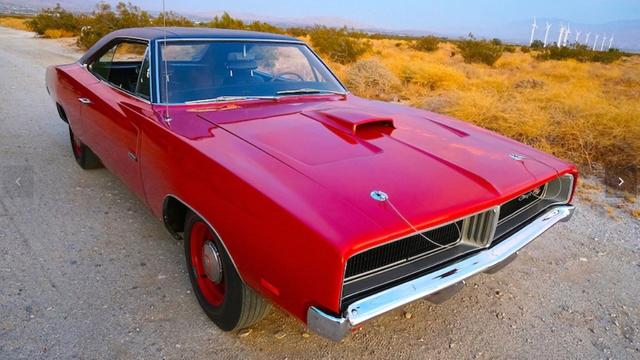 This Survivor is the Most Original Mr. Norm’s 1969 Dodge Hemi Charger in the World
https://www.hotrod.com/articles/mr-norm ... -survivor/


Though it has traded hands several times, this Hemi-powered 1969 Dodge Charger R/T remains faithfully original, as verified my Mr. Norm, himself.

Using the word "survivor" to describe a car implies that the vehicle is mostly original and unrestored. The term definitely applies to this 1969 Dodge Charger Hemi, currently owned by Mopar collector and restorer Brad Toles. It was originally ordered at Grand Spaulding Dodge by a customer who planned to race it at his local track in Texas. He requested that a scoop be added to the hood and Super Bee style hood pins installed. All of these modifications were made at Mr. Norm's Grand Spaulding Dodge, arguably the most famous high-performance Dodge dealership in the world. Other performance upgrades completed at Mr. Norm's included adding an 8-quart oil pan and strategically placed lightening holes punched in the core support and K-member.

After many years in Texas, the car was sold to a buyer in Canada in the 1980s, then to a Studebaker enthusiast (with clearly eclectic taste) who rebuilt the engine to original factory specs. After many years of ownership, he lost interest in the Charger along with his Studebakers, and the car was for sale again.

In 1997, the car was purchased by Mopar enthusiast Stan McCutchen, who brought the car to Toronto for his friend, Rick Ritter. The engine was due for another freshening up, so Ritter rebuilt it, boring it 0.030 inch over and filling it with all new Chrysler components. Ritter also installed a correct set of new 15-inch wheels, reproduction Redline tires, and a reproduction exhaust system, as the originals were long past their prime.

In a very fortuitous encounter at the 1999 Moparfest in New Hamburg, Ontario, Canada, the car was reintroduced to Mr. Norm Kraus, who was a guest judge at the show. Norm was amazed. "Without a doubt, this was the most unmolested Charger I had ever seen," he said at the time. To document the moment, he signed the car inside the trunklid, a signature that the car retains today.

Eventually, the car came to current owner, Brad Toles. Documentation indicates that it is one of 225 1969 Chargers equipped from the factory equipped as it is. That plus its remarkable, original condition made it a must-have for the Mopar enthusiast. Having restored many cars in far worse shape, Brad appreciates that this Charger doesn't need much more than a regular detailing, some high-octane gas, and a car cover to keep it nice.

In the 1960s, a few car dealerships across the country began to specialize in specific types of vehicles to help market themselves to customers looking for high-performance vehicles. Such was the mindset of Mr. Norm Kraus, who set up his dealership at the corner of Grand and Spaulding Avenues in Chicago. Starting as little more than a dirt lot in 1963, Grand Spaulding Dodge became nationally known as the place to purchase high-performance Mopar vehicles.

Grand Spaulding Dodge also offered cars that were dyno tuned on site to ensure that the power advertised could be proven. Most notably, Mr. Norm would take smaller cars, such as the Dart, and slide in a 440 or Hemi engine bolstered with a supporting cast of driveline upgrades. For those into racing, you could order a full race car ready for competition in Stock, Super Stock, or other form of racing. One look at Mr. Norm's regular advertising, posted in magazines such as HOT ROD and Motor Trend, would reveal just how serious his efforts were at the time.

Norm also undertook the development and proof-of-concept of his own muscle car ideas. "When he was satisfied that he had a winner, such as with the 1967 H-code 383 Dart or 1968M-code 440 Dart, he would personally present the vehicle to Bob McCurry at Chrysler Corporation headquarters," says Larry. McCurry was vice president of Chrysler and head of the Dodge Division. "If McCurry thought that Norm had a winner, he would build them, but Norm had to order a minimum of 50 cars at one time to legitimize production. If you think back to the era, most dealers would not even order one of these high-performance vehicles, much less order 50 on spec. Talk about courage of conviction, Norm had it in spades. He believed in what he did and knew how to market these vehicles to a performance-hungry youth market."

Ordering muscle cars in quantity was standard fare at Grand Spaulding Dodge. "The original documents we have on file from Grand Spaulding show how Norm would order cars like the Charger R/T, Super Bee, or 340 Demon in minimum groups of at least 25 at a time and oftentimes more," Larry explains. "Again, nearly all other Dodge dealers refused to stock any performance cars. If you wanted one, you had to order it and wait months for it to be built and arrive at the dealership. At Grand Spaulding, you picked out the one you wanted and drove it home that day."

The banner for Grand Spaulding Dodge is carried on today by Mopar fanatic Larry Weiner, who was there during the halcyon days of dealerships back the 1960s and today still offers new Grand Spaulding Dodge-approved Challengers under the watchful eyes of the man himself, Mr. Norm.

Decoded by Galen Govier and backed with elaborate paperwork, this trim tag codes shows the breakdown of options and build timings for this very special car.

Among the unusual pieces ordered by the original owner and installed by the mechanics at Grand Spaulding Dodge were Super Bee hood pins and this hood scoop to allow more air into the engine compartment. We can't imagine what the dealership mechanics were thinking of the request as they cut into the new Charger's very cool hood.

This view shows just how original the engine bay is with all the correct wiring, components, and wiring looms. Modern hose clamps have been used to make sure coolant does not leak, but the original parts are on hand.

One of the few points where this survivor Charger varies from original are these wheels and tires. When the original car was drag raced by the first owner, the tires and wheels were replaced with more competition pieces. These wheels and tires are aftermarket but period correct.

This Charger is correct right down to the rubber license plate snubbers that dress the rear valence.

The original interior shows the care it received despite multiple owners. The only modifications visible here are the aftermarket removable floor mats that Toles uses to protect the carpet.

The original buyer requested these lightening holes that GSD drilled in the core support and K-member.

Cool car with a great story! Not sure I agree with the "cool hood" comment, though.