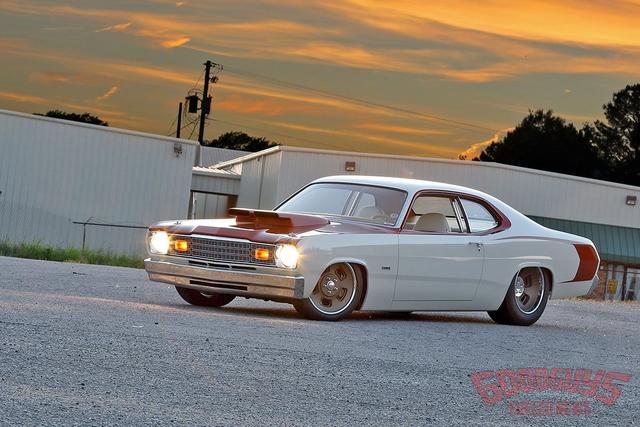 
The story of Beth Hazelwood’s 1974 Plymouth Duster is a long one, 44 years to be exact. In 1974 Beth was engaged to a man named Danny Johnson and the two went to the local Mobile, AL Plymouth dealership in the summer of ’74 and bought this 360 Duster. It was black with white stripes, white interior, and a white vinyl top. Beth and Danny married shortly after and for a while the Duster was their daily driver, but like most men at that time the need for speed itched at Danny.

It wasn’t long before Danny began racing the Duster in the IHRA’s Pure Stock class at a local dragstrip in Gulfport, MS. A few performance upgrades were made but it was still a regularly street-driven car while clicking off mid 13-second passes. In 1977 Danny let Beth make a few passes in the Duster and eventually she became the full-time driver racing in the NHRA’s Stock Eliminator class. Beth weighed less, which in turned improved the times of the Duster, and her reaction times on the tree were consistently quicker than Danny’s.

Beth and Danny raced the Duster through the early-’90s, when it was parked with plans for a restoration. Life had other ideas, though. In 2005, Beth and Danny survived Hurricane Katrina, but the Duster ended up 4 feet under water. More hard times followed after they moved to Mississippi, as Danny died in 2013 following a long battle with cancer. After getting her affairs in order, Beth sent the Duster to a restoration shop, only to see it languish for more than two years. Following a full police investigation, the car was found in storage with little work done and a past-due bill to get it back.

After Danny’s passing, Beth met Mike Hazelwood at a local car show. He also owned a Duster and the two became friends and eventually began dating. Mike helped Beth after Danny’s passing in many ways, but he was instrumental in helping retrieve her Duster and getting it in the right hands. Those hands belonged to Jonathan Goolsby and his team at Goolsby Customs, who worked closely with Beth to fulfill her dream. The restoration idea soon went out the window and a new plan was devised for a ’70s drag-inspired build.

The Duster received the full treatment at Goolsby Customs, starting with a Roadster Shop chassis that stretched the wheelbase 3-inches in front and 2-inches in the rear and provided a performance IFS, four-link-suspended Currie 9-inch rearend, and Baer brakes. The chassis supports a potent Hellcat Hemi outfitted with Holley ignition, MP Fab headers, and Borla exhaust. The 700-plus horsepower is sent through a Bowler-prepped T56 six-speed controlled by a pistol grip Hurst shifter. It all rolls on custom-machined 18×7- and 18×11-inch EVOD wheels with Mickey Thompson tires.

The Duster’s “Kasper” moniker is Beth’s way of joking about the car disappearing like a ghost for a few years. It sent her on a whirlwind of emotions, but it’s finally finished and looking better than ever – all while paying tribute to her memories behind the wheel at small-town dragstrips throughout the Southeast.

Not my favorite '70s Mopar, but everything becomes cool when it's got a Hellcat!