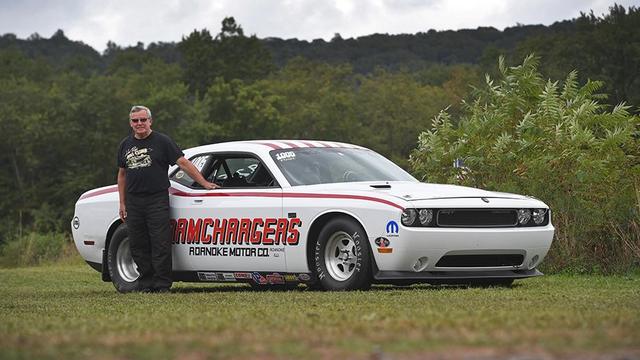 
In 1959, the Ramchargers were formed when a group of engineers and auto enthusiasts from Chrysler banded together to go drag racing. Starting with a ’49 Plymouth business coupe, the Ramchargers eventually went on to dominate the NHRA Super Stock and Stock classes with their string of Mopar entries.

The Ramchargers are credited with helping to start the Funny Car class in the mid-1960s, and they also led the charge to install the 426 Hemi engine as the staple of nitro racing. In short, the Ramchargers’ contributions to the sport are too numerous to mention, but it’s not an exaggeration to suggest that NHRA class racing, at least in its current form, would not exist today without their influence.

Given the Ramchargers storied history, it’s no surprise that David Thomas chose to honor their trademark red and white “candy stripe” paint scheme when he debuted his V-10 powered Drag Pak Challenger. Thomas asked for permission and received the blessing of the Dave Clabuesch and Mike Wagner, the two most recent owners of the Ramchargers trademark, who also added their autographs to the car.

“When I was a kid in high school going to the races, I always enjoyed watching the Ramchargers,” said Thomas. “When I got this car, I just thought it would be a cool way to honor them.”

Thomas, who operates a Dairy Queen franchise with his wife, Deana, raced Hemi cars early in his career, but he’s best known in class racing circles for his swift big-block powered Corvette that set numerous records and often topped the qualifying sheets at Northeast Division events. A longtime Viper fan, Thomas’ interest swung back to the Mopar brand in 2011 when Dodge introduced the V-10 powered Drag Pak Challenger.

“When they came out with this car, I wanted to have the first one,” Thomas said. “We’d had a lot of success with the Corvette, but I just felt like the class was headed in the direction of the newer cars. We’d held the record with the Corvette for about 17 years, and to be honest, it wasn’t a challenge anymore. I owned two Vipers, a ’94 and an ’08, and pursued it through my Viper connections."

Roush built the V-10 cars for Mopar, and we went out to Michigan to watch them built it. Then, we took the car to Mike Pustelny [MPR Race Cars], and he did a few little things like added the weight box. Ten days after I got the car, we were at Atco Dragway, and we set the AA/SA record. Mopar really loved that.”

Thomas currently has the record in the FSS/E and FSS/F classes, and he has run a best of 9.11 at more than 147 mph. Although he generally races the car in Super Stock, it remains a legal Stocker, including the nine-inch Mickey Thompson tires.

“You really can’t compare driving the old cars with the new ones,” said Thomas. “This car makes so much more torque than the Corvette, and even though it’s heavy, it’s still a very exciting ride. We have to back some of the timing off to get it off the starting line. It’s all very interesting because with the fuel injection and all this new stuff, I’m not what you’d call the most computer savvy person.”

Thomas gets support from Deana and trackside help from longtime crewmembers “Tired Tom” Dispenziere and Joe Sharon. At his home event, the Mopar Express Lane NHRA Nationals presented by Pennzoil in Reading, Thomas made it to the second round of eliminations before dropping a close battle against eventual race winner Herbie Null Jr., although he recently won a pair of the hotly contested Super Stock/Stock combo events held at Atco Dragway.

“I think Mopar built around 50 of these V-10 cars, but there’s only about three or four of us out there running them right now,” Thomas said. “I guess the rest of them ended up in someone’s car collection. That’s a shame because they are good cars, and with so few of us out here, it doesn’t take much for us to get hit with horsepower.”

This is an awesome Drag Pak Challenger! Even if it doesn't have a HEMI!