This 1954 Chevrolet Was Destined To Have Hemi Power

This 1954 Chevrolet Was Destined To Have Hemi Power 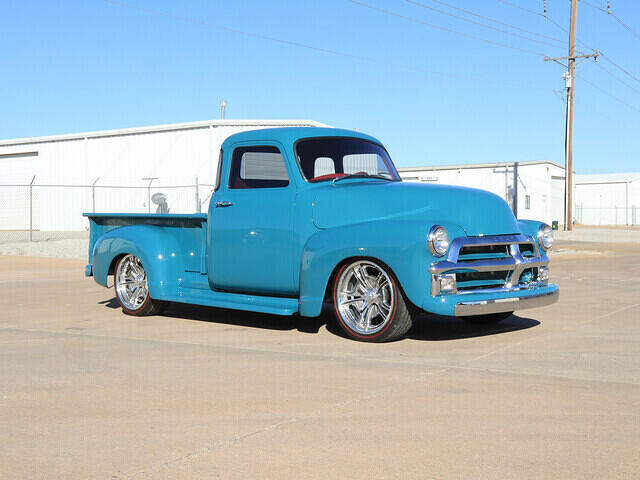 This 1954 Chevrolet Was Destined To Have Hemi Power
https://www.holley.com/blog/post/this_1 ... emi_power/


The blue 1954 Chevrolet 3100 five-window truck affectionately known as the "Hemi Truck" at Harold's Rod Shop is what happens when a Mopar fan with a sizable budget gets his hands on an old Chevrolet pickup and believes a Hemi can go anywhere it wants. Are you curious to know how this classic Advance Design truck wound up with a late-model 392 Hemi and a six-speed?

The story starts in the mid-1970s in Oklahoma City, Oklahoma. A young Ricky Seedorf drove this old Chevy to high school every day. After graduation, Ricky parked the ’54 outside next to a barn and it sat rusting away for decades. Many years later he and his older brother Tom, a devout Mopar guy, got to talking and Ricky gave Tom the Chevrolet with the only caveat being he wanted a ride when it was done. Unfortunately, that ride would never come...in 2014, Ricky was killed in a rollover crash on Interstate 40 outside of Oklahoma City.

Tom wasn't in a great position to take on the full rebuild of Ricky's truck. He had enough on his plate running his company, but he wanted the '54 to undergo a restoration that would be a fitting tribute to his late brother. If you are having any questions about why there is a Gen III Hemi in the engine bay, a quick peek inside Tom's garage will answer all of them. With rides like a 2005 SRT-10 Ram pickup, a 2008 Challenger, a 2010 Drag Pak Challenger, and a 2015 Hellcat, it was a no-brainer that Ricky's Chevy was going to wind up being Chrysler-powered. Wanting to make sure that the '54 was going to receive the care that it deserved, Tom entrusted Harold Clay at Harold's Hot Rod Shop in Enid, Oklahoma to complete the project.

Instead, Harold wound up ordering Art Morrison’s 1947-53 Advance Design chassis without the motor mounts. This was just the beginning of special one-off modifications that would be necessary to accommodate the Gen III Hemi. The 392 was installed into the Morrison chassis by fabricating special motor mounts and tack-welding them into place. Then it was time to set the rusty cab, sans cab floor and firewall, down on the chassis to fabricate a new floor and firewall that could clear the bulky Tremec transmission.

The body structure of the '54 was extremely rusty, with large sections of sheetmetal missing or unusable. Harold advised Tom to get a better cab, but Tom said he wanted to keep the cab that Ricky rode in. Harold looked to Auto Metal Direct for replacement body panels. After a complete mock-up, Harold and crew disassembled the ’54 down to individual parts and prepared them for paint. Harold formulated a custom color inspired by an original 1954 Chevrolet Truck color and had Randy Nunley of Carter Paints in Enid, Oklahoma mix up a batch of premium quality PPG products.

Harold whittled down the stock front and rear bumpers to fit flush inside custom-fabricated body-color roll pans. Harold completely redesigned the dashboard to add a bit of Mopar feel. The dashboard features custom-made 1934 Plymouth gauges by Classic Instruments. A Kugel 90-degree master cylinder is hidden behind the instrument cluster, keeping the firewall free of clutter.

Once the cab's paintwork was finished, Harold personally transported it out to California to have Ron Mangus create a custom leather interior. Creature comforts include ice-cold Vintage Air air-conditioning and Nu Relics power windows. A Grant steering wheel sits atop an iDidit tilt steering column, and the sound system is comprised of Rockford Fosgate components.

Harold’s shop custom fabricated Gen II 426 Hemi valve covers to adorn the Gen III 392 Hemi heads. To eliminate unneeded OEM-mandated features and vastly improve aesthetics, a Holley Sniper EFI fabricated intake manifold was installed, shaving a couple of pounds off the Hemi while adding a little horsepower. The exhaust system consists of JBA Headers that flow into Borla mufflers via a custom-fabricated stainless steel exhaust system that was fabricated by Mickey Tessneer at Modern C10 in Norman, Oklahoma. The cooling system is based around a PRC four-row aluminum radiator and the truck's wiring harness is from American Autowire.

In 2019 Harold’s Hot Rod Shop initiated a tradition of debuting completed projects to their clients in Building 4 at the Grand National Roadster Show in Pomona, California. For GNRS 2022 Harold showed a 1966 Chevelle and the Hemi Truck. Harold called Tom to come see the completed Hemi Truck as they were loading it on the enclosed trailer for Pomona, and as fate would have it that coincided with Ricky’s birthday. At GNRS 2022 the Hemi Truck took 1st Place in the Full Modified Class and was awarded Outstanding Truck of the Show.