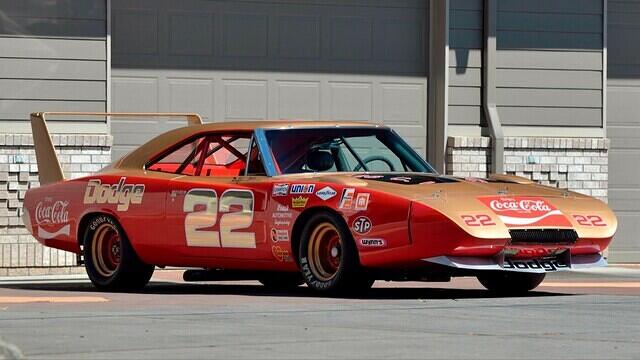 This 1969 Dodge Hemi Daytona NASCAR is representative of just why Dodge created the Charger Daytona program—racing. Today, any street version of those aerodynamic specials is very desirable, and this example is actually a one-of-one artifact that recalls the superspeedway program itself. Receiving a First Place Award at the 2005 Amelia Island Concours d'Elegance and most recently displayed at the Lemay Car Museum in Tacoma, Washington, from 2021-2022, this Charger Daytona has been detailed in the correct red and gold Coca-Cola No. 22 livery used by Bobby Allison in that era and accurately reflects the technology of the time.

On August 24, 1969, while testing before the Daytona models would first be unveiled for competition at Talladega, Bobby Allison unofficially drove his No. 22 car for four laps in excess of 200 MPH, and a copy of a lap time sheet is included. Allison personally inspected this car and verified its authenticity in a handwritten letter dated November 10, 1999, and the dash is autographed by Allison in two locations. In addition, the forward cowl of the engine compartment is autographed by George Wallace, one of Chrysler's top aerodynamic developers.

Underneath the pinned hood is a 426/650 HP Hemi engine built and dyno tested by the legendary Dick Landy, and it uses Mopar’s performance-designed Hemi block and heads, correct 706 NASCAR rods, a dry-sump oil assembly, and the vintage single 4-barrel “Bath Tub” racing intake with a Le Mans-type Holley carburetor and unmuffled side exhaust exits. This car even has the cowl plenum air induction box the program authorized. Like all he-man NASCAR Mopars of this time, a 4-speed manual transmission complete with scattershield bellhousing backed the engine up, and there is a heavy-duty, 9-inch Ford differential sending power to the rear tires. The NASCAR performance suspension means dual shocks on all four corners, along with red and gold, steel, competition wheels and period-look Goodyear racing rubber.

The interior further reflects this heritage of NASCAR racing with a braced single seat, tape-wrapped steering wheel, Hurst floor shifter, Prestolite ignition parts, custom gauge dash and a full roll-cage. This car was rebuilt after being discovered in a barn by Pat McKinney and is stated to have been the very chassis previously piloted by the NASCAR Hall of Fame driver. Now restored to reflect the legendary era of NASCAR’s superspeedway aerowars and the fabled Bobby Allison connection, this 1969 Dodge Hemi Daytona wearing No. 22 is certain to become a treasured, exclusive machine for somebody special enough to own it.

Another great winged HEMI car crossing the auction block! I love these!