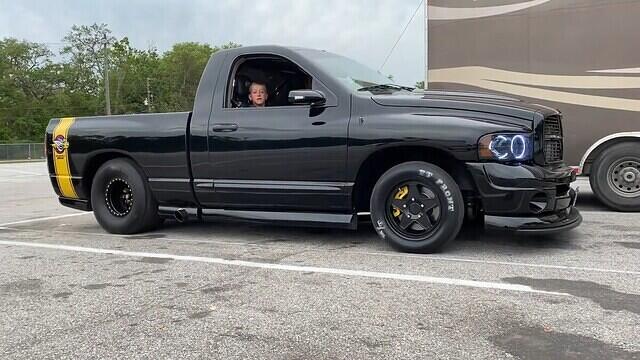 
Fans of cool Ram trucks might remember the 2004/05 limited-production pickup created on the basics of the two-door short-bed platform and liveried in distinctive yellow and black attire. Surely, the Rumble Bee was an homage to vintage Super Bees and also a “beast.”

Featuring Dodge’s most powerful Hemi V8 engine iteration at the time, the 5.7-liter with 345 horsepower, some were audacious enough to say the Ram Rumble Bee was among the best Dodge Ram trucks ever made. And we all know that Stellantis and its former corporate personalities have had us spoiled for choice over the decades.

Alas, just one look at the black-and-yellow 2004 Ram Rumble Bee that came from Canada to partake in the Modern Street HEMI Shootout (March 27th, 2022) event at Orlando Speed World Dragway in Florida and one will know that something is amiss. The dead giveaways are the usual suspects: chunky Hoosier dragstrip rubber for the rear wheels and cookie cutters upfront. However, there is also another hint, aka the prominent hood bulge with a 438 twin-turbo inscription on it.

According to the information provided by the videographer behind the Drag Racing and Car Stuff channel on YouTube, the owner did most of the fabrication all by himself in old-fashioned DIY style, and the result is clearly something to behold. Also, something to use in the pursuit of personal-best glory, as well as possibly a new class record (the best Modern Hemi Ram time was 9.4s on the quarter-mile).

The initial solo pass at the 1:45 mark put everything into the proper perspective, with the custom Rumble Bee nailing a close-but-not-close-enough 9.66s pass at 145 mph/233 kph. No worries, though, as competition usually makes for a much better challenge(r). Or, rather, a Dodge Charger on this occasion, from the 2:45 mark. Well, the unsuspecting Mopar was caught in a Rumble Bee tornado that left it standing in its lane long after the wheelie-performing Ram was off into the horizon posting a new world record!

The time difference and ensuing obliteration were obvious: 8.96s against a 9.74s pass! However, the pursuing driver probably thought it was a one-time achievement and asked for a rematch that occurred at the 3:45 mark. Alas, the result was the same, with a minute difference: 9.38s pass versus a 9.79s run! What a Hoosier-equipped truck delight this was...

Wow, a HEMI RAM popping a wheelie and breaking into the 8s. Awesome!