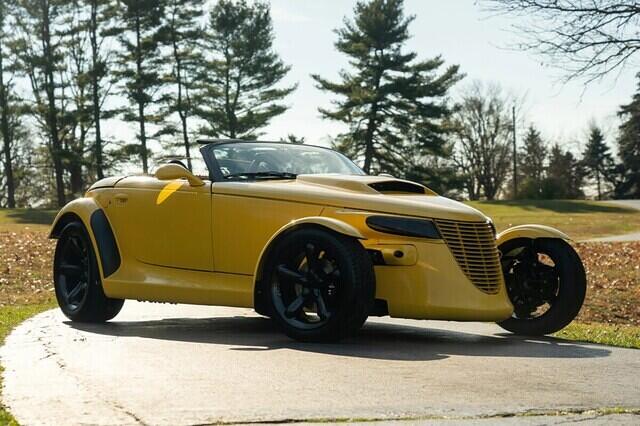 
This 1999 Plymouth Prowler spent time in New Hampshire and Maine, and it was initially modified under prior ownership. Its 6.1-liter Hemi V8 is paired with a four-speed automatic transaxle, and additional modifications include a high-performance camshaft, a double-pass aluminum radiator, ceramic-coated headers mated to a 3″ dual exhaust system, and aftermarket friction clutches and gearing as well as powder-coated treatments for the wheels, brakes, and front suspension components. Recent service included fluid changes as well as replacement of the tires and brake components. Acquired by the selling dealer in 2020, this modified Prowler is offered in Pennsylvania with an accident-free Carfax report and a Maine title.

The Prowler was built on a bonded-aluminum chassis, and this example is finished in Prowler Yellow (PY3) and features front cycle fenders, dual exhaust outlets, and a black convertible top that stows in the rear-hinged trunk. The hood was modified with a scoop and refinished during current ownership, and close-up photos of the body, lenses, and noted imperfections are provided in the gallery below.

Staggered-diameter wheels were powder-coated black during current ownership, and replacement Continental ExtremeContact tires were also installed. Further additions are said to include Mopar-sourced revised front wheel hubs and powder-coated treatments for the brake and suspension components, and the braking components were replaced.

The cabin features seats upholstered in gray leather with color-coordinated trim and carpets. Amenities include air conditioning, cruise control, and a factory cassette stereo equipped with an equalizer, as well as power locks, windows, and mirrors.

The dashboard features a centralized body-color instrument-panel insert housing all gauges aside from the AutoMeter tachometer, which is mounted on the tilting steering column. Just under 25k miles are shown on the digital odometer.

The 6.1-liter Hemi V8 was reportedly sourced as a crate engine, and it was modified and installed by Performance Innovations in Wilmington, North Carolina. Additions include a high-performance camshaft, a double-pass aluminum radiator, and ceramic-coated stainless-steel headers linked to a 3″ stainless-steel exhaust. Multiple fluid changes were conducted in preparation for the sale.

Power is sent to the rear wheels through a torque tube and a rear-mounted four-speed automatic transaxle said to be fitted with a TransGo shift kit, a TCI Automotive flex plate, and Alto Performance Red Eagle friction clutches. Further additions include a Prowler Pro-sourced torque convertor and gear set. Additional underside photos are presented in the gallery.

The Carfax report shows no accidents or other damage and lists history in New Hampshire, Maine, and Massachusetts. An open recall for the brake warning light is noted in September 1999.

The car is already sold, but I thought it was cool enough to share!
Great combo with the classic Prowler design and the HEMI engine!