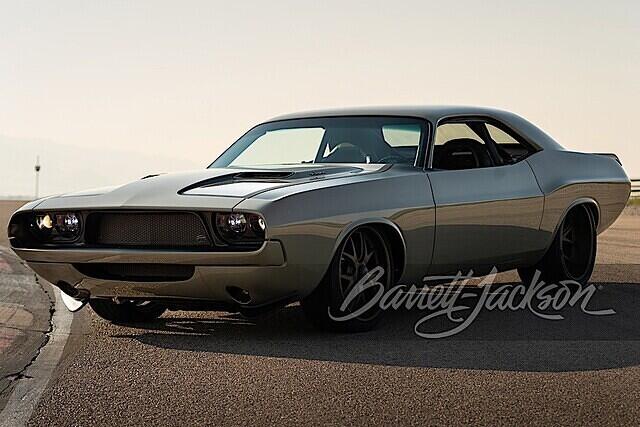 
Those who have attended this year’s SEMA show in Las Vegas have certainly left the venue enchanted by the literal flood of custom builds and specialty equipment presented there. And among the jewels on display was this here 1973 Dodge Challenger.

Shown in front of the public at the MagnaFlow booth on the floor of the event, the Challenger is not only one of the newest such products on the market, but also one of the most extreme we’ve seen in quite some time.

And the even more exciting news is that it’s selling, so uncharacteristically soon after its debut. Known as The Chastizer, the car was just listed by auction house Barrett-Jackson for its sale in Scottsdale, Arizona, at the end of January.

The Chastizer is the work of Utah-based Streamline Custom Designs, a shop that over the years brought to light anything from 1932 Ford street rods to 1950s and 1960 Chevy sports cars and pickup trucks. For the Challenger, Streamline went above and beyond and modified everything, inside and out.

The muscle car presents itself as a visual delight, a sculpted body of an iconic model riding close to the ground on adjustable coilover shocks and a narrowed 4-link suspension for the rear. Making the connection to the ground are Schott wheels, sized 20 inches at the rear and 19 inches up front.

The wheels get their spin from a HEMI 6.4-liter engine, but one that is no longer in its stock condition. According to the seller, the powerplant has been bored and stroked, and gifted with a Magnuson supercharger.

We’re not told anything about the unit’s power rating, but we do know it is controlled by means of a 4-speed automatic transmission, and breaths out through a dual exhaust system with MagnaFlow mufflers.

The Slate Gray-painted body hides an interior with a roll cage instead of rear seats and black leather seats up front. On deck for the passengers’ delight is an insane 2,000-watt Kicker stereo system supported by two subwoofers of the same make.

We’re not told how much the car is expected to fetch during the auction, but we’re pretty confident it will make a splash – if it does, be sure we’ll come back on the story and tell you all about it.