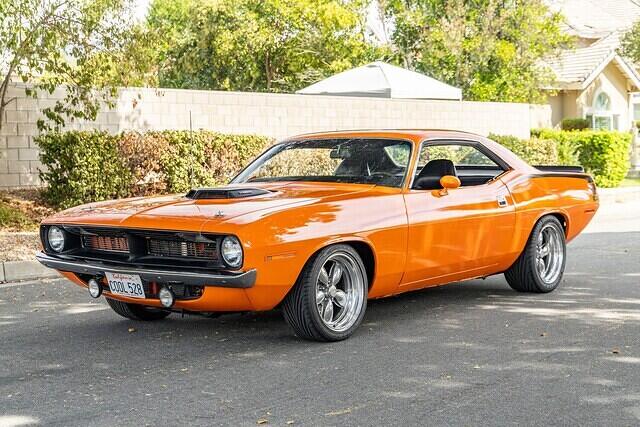 
The 426 Hemi goes with the Plymouth ’Cuda like pepperoni on pizza. According to the seller, this 1970 Plymouth Barracuda originally came with a 318 — the black olives on the automotive pizza — and it was swapped for an approximately 700-horsepower 528-cu.in. version of the Gen II Hemi during a restomod makeover. There are reportedly about 2,000 miles on the completed project, adds the seller, which also includes a Tremec five-speed overdrive transmission, four-wheel disc brakes, a Hemi Orange paint job, and more. “It’s as fun to drive as it is to look at,” says the seller.

Originally fitted with a 318 V-8, the factory engine was swapped for a Gen II Hemi that is based on a Keith Black block and was bored and stroked to 528-cu.in. It’s complemented with an MSD ignition system, serpentine-style accessory drive system, and headers that flow into a 3-inch Flowmaster exhaust system. There’s also a robust cooling system, with a large, 26-inch aluminum radiator and dual electric fans. The engine is said to start and run well, with no reported smoke. It’s backed by a Tremec TK0-600 five-speed manual transmission that channels the Hemi’s torque to a 4.10-geared Dana 60 rear axle. There are no reported powertrain leaks, but the seller notes a light oil film that suggests mild weeping.

According to the seller, the Hemi Orange paintwork on this Plymouth is about five years old and “looks great.” It’s reportedly an original, rust-free California car, too. Exterior enhancements include a Shaker hood, with hood pins, and an AAR-style rear spoiler, along with a black-painted grille. All of the exterior trim appears to be in very good condition, per the provided photos, and all of the exterior lighting is reported functional. The car also cuts classic stance with 17-inch versions of the vintage “daisy” wheels.

The black vinyl interior of this Barracuda was also restored, with new, stock-style seat covers, new carpet, and a new headliner. The door panels and dash pad also appear to be very good condition, in the photos, as does the steering wheel, which shows some age-related wear in the simulated woodgrain of the wheel rim. The gauges have been updated with white faces and the five-speed gearbox is stirred via a classic Pistol Grip shifter. A trio of AutoMeter gauges has also been installed in a panel mounted below the dashboard and all are reported functional. The seller reports the fuel gauge is not accurate and the car’s original AM/FM radio is not functional — although a case could easily be argued that the sound of a 528-inch Hemi engine blowing through a 3-inch Flowmaster exhaust system is all the music that’s needed from this Mopar.

The chassis and suspension reportedly have been restored, with no known issues or needs. The work included a new front suspension, with heavy-duty springs, to support the Hemi engine, along with a new rear suspension, with new shocks and bushings all around. The rear suspension has lowering blocks to give the car a more aggressive stance. There’s also a four-wheel disc-brake system from Wilwood. The car rolls on Goodyear Eagle F1 tires mounted on polished 17-inch American Racing “daisy” wheels. The tires are said to be “new,” with about 500 miles on them. There are no reported driveability issues and no reported vibrations.

The seller states that this vehicle will be sold on a clean California title in his name. Additional documentation includes the original fender tag, which is still mounted on the inner fender. With approximately 700 Hemi-fired horsepower on tap, this for this 1970 Plymouth Barracuda restomod Mopar appears ready to offer its next owner an exhilarating experience in one of the muscle-car era’s most classic vehicle combinations. Pepperoni belongs on a pizza and a Hemi belongs in a ’Cuda.

Everything about this restomod HEMI Barracuda yells GOAT in my book!