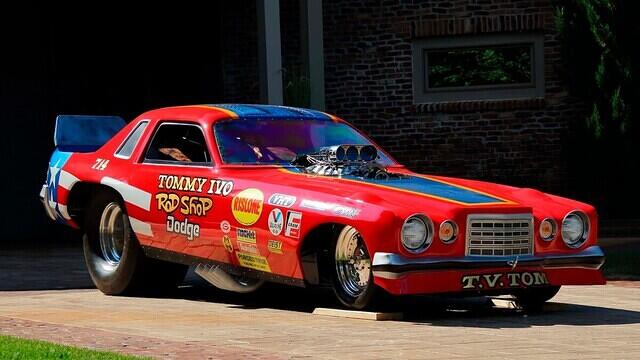 For touring racing star Tommy Ivo, the idea of leaving drag racing after over two decades of excitement was a hard call, and the car offered here was his finale in the nitro ranks. Now wearing the original 1977 Dodge Charger body—which was already becoming a rarity by that time since many racers had turned to the replicas of mini-cars like Arrows and Monzas—this race car is from the heyday of the exciting and dangerous “fabulous floppers,” which occurred just before the cost of drag racing skyrocketed. Since Ivo made his money match racing and Top Fuel was on the wane, he had made the switch to AA/FC in 1976 to a Dodge Dart Sport design, retaining his sponsor backing from the Rod Shop and Dodge.

The follow-up to the Dart was this Charger, which did not run a lot of events before being parked. Like everything TV Tommy did, the car was flawless in overall appearance, and the package has been rebuilt and painted by two-time Funny Car World Champion Cruz Pedregon. Beneath the body now is a McKinney chassis that hosts a 426 CI supercharged Hemi V-8 engine. The aftermarket aluminum engine is presently set up for nitromethane and could be cackling fire from the headers, complete with its period-correct single-plug Mallory ignition, polished Mooneyham 8-71 topped with a three-port injector, Waterman fuel pump, chrome valve covers and anodized fittings.

The former childhood TV star’s fiberglass shell wears red, white and blue paint lettered for “T.V. Tom” on the front spoiler and features sponsor Rod Shop’s flag graphics. Out back is a hand-fabricated aluminum deck spoiler and Simpson parachute. When Ivo retired this nitro funny car, he did a brief stint in jet cars. The TV Tommy Charger comes with the original funny car tube frame.

This is a cool piece of Funny Car history! And simply '70s era Dodge Charger history.