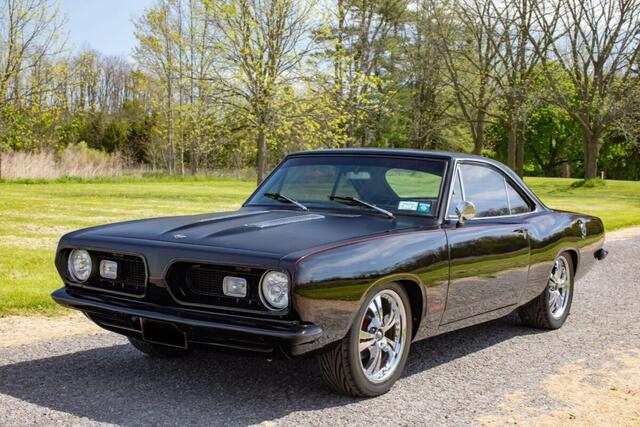 
This 1967 Plymouth Barracuda coupe was modified during previous ownership with a 8.3-liter V10 crate engine, a six-speed manual transmission sourced from a 2001 Dodge Viper, and a Detroit Truetrac rear differential. The car has been repainted black with red pinstripes over a black vinyl interior, and additional equipment includes a JAZ fuel cell, JVC CD stereo, power steering, polished 18” wheels, four-wheel disc brakes, and adjustable coilovers. This modified Barracuda was acquired by the seller approximately four years ago and is being offered with partial build records and New York registration in the seller’s name.

Bodywork has been repainted black with a matte-finished hood and windshield cowl, and additional features include body-colored bumpers, tinted windows, aftermarket headlights with LED accent lighting, black grilles, and dual exhaust outlets. Areas of pitting on the passenger-side front 3/4 window trim can be seen in the gallery below, and flaws noted by the seller include scratches on the hood and roof, runs in the clear coat under the passenger-side door, a dent near the fuel filler, and imperfections in the front grille.

Polished aftermarket 18” split-spoke wheels are mounted with Toyo Proxes T1R tires sized 245/45 up front and 275/40 out back. Stopping power is provided by four-wheel discs with red-painted calipers and stainless-steel lines that were installed in 2014 by DCA Racing and Fabrication of La Crosse, Wisconsin. Additional work at that time included the installation of polyurethane bushings, a sway bar kit, and four-wheel adjustable coilovers with QA1 units up front.

The cabin has been lined with HushMat sound deadening material and features front bucket seats and a rear bench that have been reupholstered in black vinyl with red piping and embroidered Viper logos on the seat backs. Red lap belts are fitted for all occupants, and equipment includes a JVC CD stereo with Bluetooth connectivity, an aftermarket alarm system, a Mojave heater, an OBD-II port, and power-assisted rack-and-pinion steering. Wrinkles in the headliner can be seen in the gallery.

A three-spoke Grant GT steering wheel sits ahead of a custom panel housing AutoMeter instrumentation that includes a GPS-based 120-mph speedometer, an 8k-rpm tachometer, and auxiliary gauges for fuel level, coolant temperature, oil pressure, and voltage. The digital odometer shows just under 4k miles since the refurbishment, around 400 of which have been added during current ownership. Total mileage is unknown.

The 8.3-liter V10 crate engine was rated at 550 horsepower and 590 lb-ft of torque when new and features a block and cylinder heads made from A356 aluminum according to literature provided in the gallery. Additional equipment includes Viper-branded valve covers, an Aeromotive fuel pump, and a trunk-mounted JAZ fuel cell, as well as an alternator, fuel pump, ECU, and wiring harness sourced from a Dodge Viper. The seller notes a recent oil change.

Power is sent to the rear wheels through a six-speed manual transmission and driveshaft sourced from a Dodge Viper, as well as a Ford rear axle housing an Eaton Detroit Truetrac limited-slip differential with 4.10:1 gearing. The frame was reportedly powder coated during the refurbishment and the front frame rails tied together. A dual exhaust system with Magnaflow mufflers has been installed, and the seller notes areas of corrosion on the underside. Note that underbody photos were taken in June 2020.

The HEMI would be a typical swap for this, so cool to see the Viper V10!