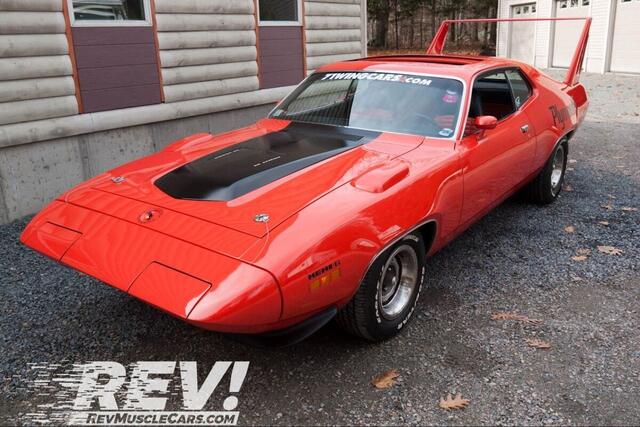 The greatest NASCAR driver of all time, Richard Petty once said, “The Superbird was probably the best handling car I ever drove…It was a pleasure to drive the car.” A Petty Enterprises went on to win the Daytona 500 in 1970. 10 of the top 13 finishers were racing with Winged Warriors. Plymouth had 21 wins, but Dodge won the points title with 17 wins that year. With these Aero cars, Chrysler was the first NASCAR manufacturer to break the 200 MPH barrier in 1970. No other NASCAR driver would qualify a car at 200 mph in a NASCAR event again until 1982. Ferrari wouldn't to achieve that velocity on the street until 1987.

This 1971 Plymouth Superbird Prototype concept is a window into what Chrysler had planned to continue their total domination of both NASCAR and the street. Based on 3/8th scale models that were used in secret aerodynamic testing conducted by Chrysler in preparation for the 1971 racing season. It is the only '71 G-series Superbird recognized by Mopar and Chief Aerodynamicist Gary F. Romberg to be the correct and accurate representation of vehicles planned for production by Chrysler for the 1971 model year.

EXTERIOR
The planned '71 Plymouth Superbird was superior in every way to its predecessor. The 1970 Plymouth Superbird was a retrofit kit on the Road Runner, using Coronet front fenders and modified Coronet hood. For 1971, the G-series fuselage was designed for maximum versatility, with the possibility of a winged warrior variant in mind. The body was 250 pounds lighter. Aerodynamic lines were tighter. The engine was more powerful. All the things you need to continue dominate on the Grand National Circuit.

The nose cone on the '71 Superbird is unique unto itself. Gary and Pam Beineke used the historical scale model for a guide and the optimal configuration results from the official wind tunnel testing to arrive at the design you see here. As a testament to the forethought Plymouth fuselage design, the nose cone shape was determined by creating a wire frame, extending the natural curves of the upper and lower fender contours. Other Prototype Concept touches include the custom Hemi +6 callouts, which give a nod to what Tom Hoover envisioned under the hood. The factory blackout rear valance has also been customized to accommodate the rear quad “Bazooka” exhaust. The overall effect is a much more cohesive and elegant design than the venerable 1970 Superbird. By every measure, the '71 Superbird was an American Supercar. A jet fighter for the blacktop.

INTERIOR
The interior is all new, Legendary Interiors factory black and orange vinyl. The Beineke's ditched the faux woodgrain for the gauge pods and dash inserts in favor of the Astrotone finish, the way Chief Plymouth designer, John Herlitz intended. The interior also incorporates a best of both worlds for front seating options, combining the versatility of the “buddy bucket” front seat and the tight, short throw Pistol Grip shifter from the console model. The shifting is crisp, operating a hydraulic Kevlar McLeod clutch. Easier pedal effort, superior engagement would have been a home run in 1971. The custom leather wrapped Tuff wheel steers a Steer and Gear firm feel steering box for a modern sporty driving experience. Looking up, you see the factory power sunroof opens to the sky, completing the jet fighter cockpit theme. The trunk is fully equipped with both the bumper and scissor jacks, as well as full size spare and a full trunk dress up kit.

ENGINE BAY
The engine bay is designed to look as factory stock with performance enhancements being shown as prototype components or hidden altogether. The HEMI engine is configured with a 3x2bbl carburetor setup, each with their own idle circuits for easy tuning. Tom Hoover, father of the generation two Hemi, always preferred this fuel delivery system. Displacing 472 cubic inches, the Mopar Performance HEMI makes a healthy 570hp, in part with credit to an exclusive Mopar Performance test cam. The secret to making 570 horsepower and achieving 15 miles per gallon on pump gas is the Kiesler/American Powertrain 5-speed with Overdrive.

CHASSIS
The chassis is a factory configuration with Heavy Duty enhancements. The front torsion bars are a beefy .96. Mopar Performance leaf springs handle the back. HD front and rear sway bars keep things planted. Wheels are 15x8 Rallyes. Tires are 255 60x15 front, 275 60x15 rear. The rear end is a highway friendly 3.54:1 DANA 60. Power is nothing without control. The Superbird Prototype Concept showcases 4-wheel power disc brakes, packaged to fit inside a factory 15x8 wheel. They are factory disc upfront and Stainless Steel Brake Corporation units out back, fed by a dual-diaphragm master cylinder.

If you have picked up a Mopar magazine title in the last 20 years, you know who Gary and Pam Beineke are. You also know these G-Series '71 Wing Cars. Perhaps you've seen them featured at one of the many national Mopar invitational shows.

What you don't see is the impact that this 1971 Plymouth Superbird Prototype Concept has had on the hobby. This car remains the only authentic representation recognized by Mopar of what the '71 Wing Car program would have produced. But there is more than that. Many, many, aftermarket performance parts still offered today had been engineered, prototyped, and tested on these vehicles. So, the impact is two-fold. They point back to history of what was possible for racing and street performance in 1971. They also have been on the leading edge of innovation in today's aftermarket performance industry and pro-touring culture. Isn't that what a prototype concept is supposed to do? I'd say, mission accomplished. This 1971 Plymouth Superbird Prototype Concept has certainly earned its own place in history; would be a significant addition to a collection looking to tell the whole Muscle Car story.

I never knew this car existed until I came across this post. Although I do prefer the 1970.