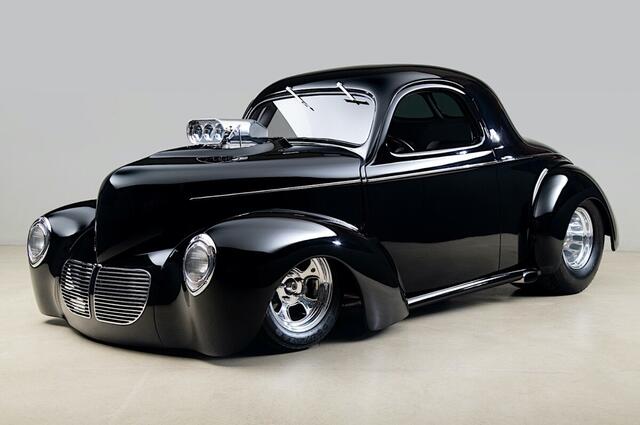 
The Willys Americar must be for custom shops across America, be it famous or less so, a pleasure to work with. The car’s lines, unique on the automotive scene, can be transformed into real works of automotive art by talented hands, and there seems to be no limit to the type of hardware that can be hidden inside the body.

The Americar was a quirky proposition on the car scene that started life before the Second World War in 1937 and died right in the middle of it, in 1942, killed by the requirements of war. Despite its short lifespan, the model spawned a great deal of variants, from sedan to pickup and everything in between.

Custom shops, of course, love the coupe, and over the years, we’ve been treated to some incredible projects based on this variant. Not many of them come close to the one we have here, though, at least in terms powertrain and such.

This Americar was made just one year before production ceased, in 1941, and spent its life like most cars do, being driven around by various owners. From 1990 to 2000, it spent its life tucked away in a barn before being discovered by the one who transformed it into what it is now.

Fitted on top of an Art Morrison chassis, the body of the Willys has been heavily massaged to be able to call itself a hot rod, and wrapped in black because there’s nothing that screams hot rod better than black.

The massive, drag wheels that are visible at the rear are not there just for show. We’re told this machine, aside from looking as a show-stopper, can easily run the quarter-mile in nine seconds at a moment’s notice.

This is possible thanks to the engine sticking out of the hood. That would be a 472ci (7.7-liter) HEMI tied to a 3-speed transmission and capable of generating 1,000 hp.

The star of several specialized magazines over the years, the Americar is for sale, going from the lot of Canepa for an undisclosed price.

This is a really clean Willys Americar. I love the elephant HEMI and the stance.