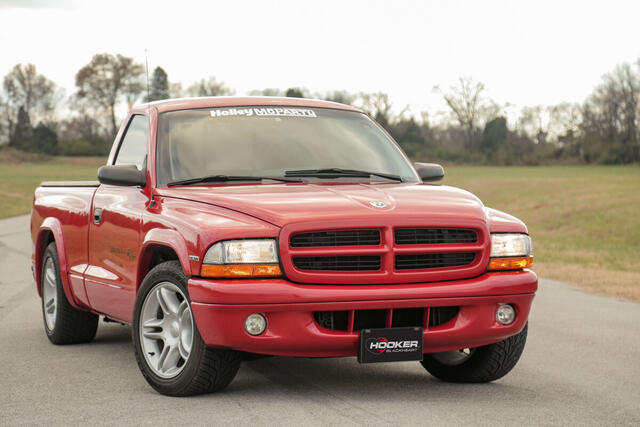 
Why swap a Gen III Hemi into a 1998-2003 Dodge Dakota R/T? Because you can place the concept of a sporty V8-powered midsize truck directly on Dodge's resume of great ideas, because nobody else did it as a production model. With a 3.91 rear axle and a Sure-Grip, room for 255/55-17 tires from the factory, a small ride height drop, and a look that was as mean as they came, the Dakota R/T was more than a looks package. It was a pickup truck that looked trick from the factory and it could easily go to war against a Ford Mustang GT with the right driver at the wheel. The straight-line performance was good, but the handling is what caught testers off-guard when the Dakota R/T entered the press pools. Only 16,496 Dakota R/Ts left the factory over the production run and no truck of a similar size has yet to try the muscle truck formula that the R/T pulled off. It's the perfect candidate for a horsepower boost.

In the late 1970s, Dodge stuck the cop-car E58 360 into step-side pickups like the Warlock and Lil' Red Express, gave them the looks to back up the muscle and the next thing anybody knew, a truck was the fastest vehicle sold in America, besting the likes of the Pontiac Trans Am and even Dodge's own Aspen "Street Kit Car", which had the same engine and less weight to haul around. When the 1980 Dodge Aspen R/T faded into history, rear-wheel-drive V8 performance vehicles seemed to have been filed into history at Chrysler. The company had saved their own bacon with front-wheel-drive cars and Lee Iacocca, then the president of Chrysler, was firm that the future lay with front-drive cars, even performance models like the Daytona and the Omni-based Charger. When the mid-sized Dakota pickup truck gained a V8 for the 1989 model year and got some attention from Carroll Shelby, the Dakota became a spark of V8 performance from Chrysler that many had believed would not be coming back. The second-generation Dakota appeared for the 1997 model year, having gained styling inspired by the radical looking 1994 Dodge Ram, which had proven to be a sales hit. Though the legacy AMC 2.5L four-cylinder and the 3.9L V6 remained on the roster, it was the offering of a V8 engine that kept the Dakota selling well, something that no other mid-size truck sold at the time had. The 5.2L engine carried on as the workhorse option, but in the spring of 1998, a new rumble was heard as the Dakota R/T made its debut. Packing the 5.9L V8 and sporting a robust 250 horsepower and a healthy 345 ft/lbs. of torque, the Dakota R/T spent the next five years as Dodge’s wild child option.

Now, nothing against the R/T in stock form, or even if you built the 360ci engine into something more than even Dodge was willing to do back in the day. There are plenty of 408ci stroker Dakota R/Ts that dance and haze the tires like it is 1970 all over again and there is absolutely nothing wrong with that. However, once the Dakota R/T went away in 2003, some real horsepower started pouring out of Auburn Hills, and they all carried one word that had mythic proportions: HEMI. Even the most basic 5.7L unit would run rings around the old Chrysler small-block. So what would happen if an enterprising individual dropped in a thumping 392ci Hemi engine into a Dakota R/T and cut it loose? Naturally, a hot-rodded Dakota R/T has appeal. The question that Holley’s engineers had to deal with was how to make the Gen III engine platform fit within the fenderwells of the Dakota without immediately resorting to the grinder or the Sawzall. So, starting out with a 1999 regular-cab example that had been well-cared for, the team got to work on the swap.

A 2015 Dodge Challenger 392 Scat Pack’s 6.4L engine was the donor motor, and with 485 horsepower and 475 lbs/ft of torque out of the gate, the engine had plenty of oats. Hooker Blackheart engine mounts (BHS541) locked the 392 securely into place and their K-member filler plate (BHS543) helped to notch the Dakota’s K-member so that the right-hand starter would clear. The 392 was treated to a Holley EFI Terminator X Max Kit (550-1424), which circumvented the trouble of cracking the Hemi's notoriously difficult ECU altogether. The variable valve timing (VVT) and Short Runner Valve (SRV) operations that the 392 came with from the factory were retained using the Gen III VVT and SRV harness for the Terminator X Max (558-132).

A current-production Frostbite radiator was modified and is currently being tested for potential production in the Dakota, and is fitted with a Frostbite twin 12-inch fan and shroud combination (FB502H) to keep temperatures right where they need to be. A Holley Small alternator, Gen III alternator relocation bracket (197-302 and 97-368) and Gen III Hemi power steering kit (97-382) tightened up the accessory drive’s footprint, a necessity given how the 392 uses up quite a bit of the real estate in the Dakota’s engine bay. The low-mounted air conditioning unit can still be used on VVT-equipped engines, but at the time of this test the engineers had not hooked the A/C lines back up on this vehicle.

For the transmission, a Hughes-prepared Chrysler 46RE four-speed overdrive automatic and torque converter were selected to handle the Hemi’s grunt. Fitted into the Dakota with a Hooker Blackheart transmission crossmember (BHS542) and 46RE adapter bracket (BHS529) locked the transmission down while freeing up some room. The transmission gets its marching orders from the Terminator X via a Chrysler 46RE transmission control harness (558-473), which sends that newfound wave of torque out back via an Inland Empire driveline to the rear axle, which is now sporting Caltracs, Moser Engineering rear axles, and a set of drag radials on those unmistakable R/T wheels. If that doesn’t give you an idea of just how tested our Holley development vehicles are, nothing will!

Now, we can tell you that these products work well together with a truck parked, but how is it to actually drive? Obviously, how you build your project will dictate the outcome, but in order to see just how well the whole program works together, we snapped up the key to the Dakota from the Engineering Department and took it on a little jaunt at the track to see how it all comes together. Now, before anything else is said, the Dakota is a development vehicle that is still being used as a test mule. Normally, this is where writers will throw in a word of warning about it being unfinished, that it's testing the latest hush-hush parts that aren’t out yet, and that you need to keep all of that in mind. Usually, that clause is put in so if something happened on the drive they can have an “out”. Sorry, there will be none of that here. The engine snaps to life as you would expect with a twist of the key, and the Holley EFI Pro-Dash (553-111) comes online quickly, showcasing the vitals. After a brief warm up, we drove through town and the Dakota behaved exactly like you would expect it to…no surprise, no drama, just a throaty exhaust note for the other drivers to enjoy. The suspension is a bit tighter than a stock Dakota R/T but that is due to modifications made before Holley acquired the truck…and even then, it just feels like a tightened-up modern muscle car.

If you are going to swap a Gen III Hemi into a truck like this, chances are you have an interest in putting your foot into the throttle every now and then, right? Well, it only makes sense to find a safe place to test out the loud pedal on the right side of the footwell. Once we crossed the gate onto the racing surface, we wasted no time in putting our foot to the floor. Dakota R/Ts have the reputation for being able to lay stripes with the 5.9L V8, but if you think that this truck would be a one-trick pony, you would be in for a surprise. Sure, it’ll burn the tires down if that’s what you’re after, but it’ll also spin that speedometer over in a way that Magnum engine could only dream of, and when you get close to a turn the truck doesn’t embarrass itself in the least. As long as you know the difference between “gentle” and “aggressive” throttle input, you could easily track the Dakota around the road course.

The back end does not threaten to step out until you get a bit heavy with the throttle. Even when you do break the back end loose, it is easy to recover so long as you didn’t wait until the point of no return. And it should be said, the engineers currently have the Dakota R/T set up for drag racing, not road course work. Caltracs and street tires weren't the best option for spirited driving on a road course on a cold winter's day, yet the truck was very easy to read and handle. It looks like a pickup, but the red Dodge is as much a modern muscle car as the more popular options. Think of what we have built as the closest thing you can get to a late model Australian ute: the functionality of a pickup truck and the fun of a muscle machine. With the 392ci V8’s plentiful power on hand, it’s a match made in heaven.

The 1999 Dodge Dakota R/T is just one of many development vehicles that Holley uses to build out the swap kits that customers have been asking for that cater to the Gen III Hemi and other engine platforms. With the first-generation Dakota, 1972-93 D-100/D-150 pickup trucks, 1966-72 B-body car and Jeep Wrangler TJ kits available and others in the works, Mopar fans can rest easy knowing that GM and Ford fans still have plenty of competition to think about!

I really loved the Dakota R/T trucks. They looked great. This one certainly performs awesome!