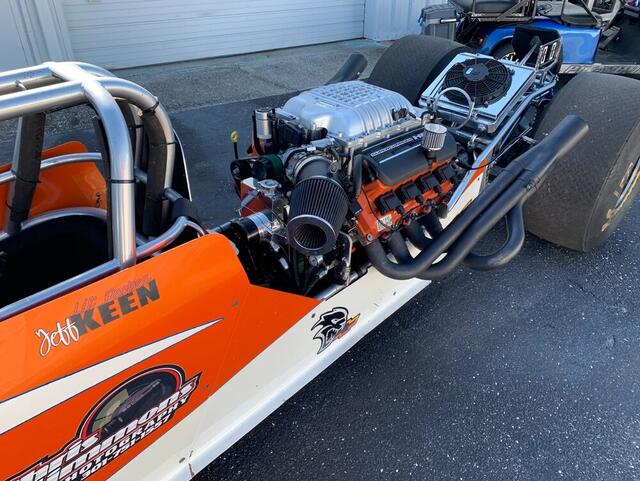 These Guys Dropped A Dodge Hellcat Engine Into A Dragster
https://www.dragzine.com/features/these ... -dragster/


Counterintuitive to the belief that the best of ideas come in a corporate engineering environment, many of the greatest inventions in the history of hot rodding have come to be between a couple of buddies over a cooler of cold brews. And so it was for Floridians Jeff Keen and DJ Scheid.

Keen is a well-traveled and accomplished blue-collar bracket racer, and Scheid an IT professional and casual car-guy that readily admits until recently he didn’t know a dial-in from a donut. But collectively, their friendship has beared fruit in an idea that, once this article is written, could have a lot of people in the grass-roots racing world talking.

In the early 2000s, Scheid paid occasional visits to the racetrack with his Corvette and Camaro for test-and-tunes, and while uninvolved since, had reminisced about the all-wheel-drive Cyclones and similar vehicles from years gone by. Scheid had said if they ever built another vehicle with all-wheel-drive and some real power that “it would be insane.” Coming from a Mopar family, it was only befitting that he grabbed up a Jeep SRT when it was released — a precursor at the time to the vehicle to come that truly fit his vision, which was the Jeep SRT Trackhawk.

“Jeff and I got together and I said, ‘hey man, I’m buying this Trackhawk, and it’s got a bunch of power, it’s going to have a whole bunch of different track modules and all that.’ He says, ‘oh yeah sure, everyone tells me they’ve got a racecar and it never pans out, but we’ll try it out.’ So we start going to some test-and-tunes, he’s racing it, we’re figuring out the features, and this thing is running really consistent times,” Scheid says. “He asked me if we could bracket-race it, so we made some changes to give us a little more speed to get it into 6.50 or 7.50 index. And all the while I’m learning about bracket racing myself — I knew nothing about it. I thought I needed to make my stuff faster, and the first couple times we go out I’m asking him why he’s hitting the brakes…‘it’ll go faster than that,’ I told him. He says, ‘I’m winning races, this is how it works.’ ”

“The whole thing kind of went in one ear and out the other, but when he got it [the Trackhawk] in the shop, we were messing around with it and we saw how impressive it was. This thing was no joke. We started taking it to the track and we were seeing that it was competitive in bracket racing — we got into the really deep rounds at several races, even footbraking it in some Super Pro races,” Keen shares.

“He’s telling me this thing is really, really good,” Scheid says. “It’s repeating run after run — Jeff even said it’s better than his dragster. After a year or so of running it, we were having some beers at the shop one night and his dragster is over here with no motor in it, and I said, ‘have you ever thought about putting a Hemi in it?’ He says, ‘heck yeah, let’s throw one in there.’ Once he said that, I was set I was going to do it.”

Keen admits he thought Scheid was joking, but a joke it was not.

Scheid procured a used 6.2-liter Dodge Hemi engine and via his tuner, Hemi guru AJ Berge, was put in contact with the Hemi engine-building specialists at Better Built Performance in North Carolina. “I told these guys what we were doing, they loved it, asked us to send the short block and told us they’d build us a motor.”

Better Built installed Carillo forged pistons, Mahle rods, and ARP bolts to the factory crank to strengthen up the bottom-end, maintaining all stock specifications (factory 6.2 bore and stroke). Scheid bought a factory supercharger from a 2016 Dodge SRT Hellcat to put on it, and likewise bolted the bone-stock cylinder heads back on.

From there, they faced the challenges inherent to anyone using a Mopar engine with GM driveline parts — like matching a two-speed GM Powerglide transmission and converter to a Mopar engine block — nevermind the water pump, pulleys, and so on on the front side.

“We drew it all out, Jeff got on the phone with several of the contacts he has in the industry, and they were all ready to work with us,” Scheid says. ATI Performance Products fabricated a mid-plate and provided a flexplate to complete the conversion, and then attention was turned to the motor plate. Scheid’s and Keen’s goal was to ensure that any parts they used could be readily found locally or at the track — nothing unique or uncommon. They designed the front plate to accept a Meziere Chevrolet water pump, repurposed the factory oil pump, and utilized a Deatschwerks fuel pump.

On the electrical side, Scheid purchased an unlocked factory PCM and wiring harness kit, and using HP Tuners software can turn the knobs and dials on the Hemi. Taking the customization a step further, he and Keen forewent the usual digital dash and data-logging systems on the market and Scheid put his computer expertise to use, utilizing open-source Real Dash software to program a custom digital dash and logger into a 10.4-inch Android tablet, which is tied into the cars’ CANbus/OBDII system and mounted in the cockpit.

All said and done, they laid out a package that could be swapped out in 4-6 hours.

“We thought it would be a great idea, and we wanted to prove the concept. We didn’t want to go crazy, we weren’t going to throw horsepower at it, but just harden the bottom, run it on 93 octane our first few races, and see if we can get it consistent. The PCM was plug-and-play, it fired right up and was probably the easiest thing in the world. It was all a little pricey, but it was worth it. I plugged it in and thought it couldn’t be that simple.”

On 93, the car ran a best of 5.18 in stock form (no tune, stock supercharger overdrive, launch RPM set at 7,000 ) and proved itself to be rather consistent.

Berge, however, advised them to use E-85 fuel — he was confident he could make the car consistent and fast, but felt 93 was too dangerous to turn up the wick.

After the changeover, the car was taken to Immokalee Regional Raceway and was put through 18 runs of testing. They found that none of the torque converters they had initially could hold the high amount of torque the 6.2 produces, and friend Troy Williams at FTI Performance fed them converter after converter to mate with the FTI ‘glide until one was found the combination liked. From there, Williams and Berge advised they throw some power at it; they acquired a second fuel pump, bumped to 1340cc injectors, swapped to a 2.72 supercharger upper pulley and a 10-percent lower and went back to the track.

The car immediately went 4.80s, but again went right through the converter. FTI supplied them another converter, this one a 10-inch out of a turbo car, and “it loved it,” Scheid explains. “It’s got so much torque that it didn’t care. It was supposed to flash at 5,700, and it ended up about 6,100, but it holds it, and holds it well,” he adds.

Berge then wicked it up a little more, dialed in 18.5-degrees of timing, and it went 4.61 with some headroom to spare. The next step is to ramp it to 23-degrees, but also increase the RPM-limiter range up to 7400-7600 (from 7,000), which will necessitate a valve spring and pushrod upgrade.

Between the injectors, upper and lower pulleys, and the second pump, the pair had less than $3,000 invested in going from 5.20s to 4.60s, and all told, Scheid estimates there is about $20,000 in the project, including R&D costs. “In the big-block Chevy world, to span that range you’re talking big, big bucks, but I’m able to do it cheap and reliably. The E-85 is also $1.81 out of the pump right now, so you have to account for that in the cost.”

“We’re looking at what it’s going to take to build packages with the team we’ve got, and pretty much offer this in a space, if it’s a viable solution, which it’s proving to be with just how it’s repeating and functioning. I’m a numbers guy, and if there’s 250 runs between refreshes on the average motor, this thing will almost pay for itself in three years just with the cost of fuel and parts. We think it will be less than what it would cost in a comparable application to run the same times — most people think Mopar is 10 times as expensive, but because the development is on the assembly line, there aren’t many specialized parts here. They really did their homework on this engine to get it drilled down.”

“We’ve even alluded to putting a warranty on the dragster application — we think we’re really close to a drop-in, plug-and-play setup capable of 1,500 horsepower,” Scheid says.

“This is something we’re passionate about, especially in this space, and it’s really cool to see something come together that will be a hell of a game-changer,” he continues. “We’re hoping to prove that you can take a stock motor out of your car, that you spent all that money for, and if you can drive, it’s consistent and it’s good. This thing runs dead-on…Jeff was turning 3-packs, 5-packs [reaction time and elapsed time packages] over and over again. The 60-foot and 330-foot numbers were repeating back-to-back-to-back, and even through a weather swing from morning to night, it was running the number. It’s absolutely deadly.”

This project is too cool on so many levels. I think it looks absolutely awesome!