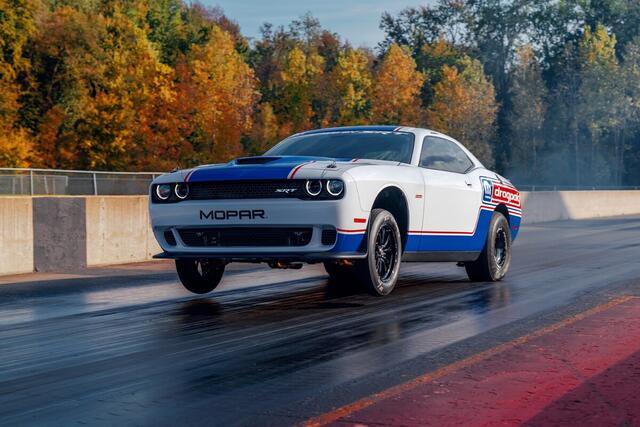 At the heart of the new Drag Pak is the latest evolution of the supercharged 354-cubic-inch Gen-III HEMI V-8 engine, based on the same power plant that won the 2018 NHRA Factory Stock Showdown (FSS) and NMCA Factory Supercar championships.

Numerous enhancements include an all-new 3.0-liter Whipple twin-screw supercharger, upgraded forged internals, new front accessory drive and a new fabricated aluminum ice tank with a clear lid that cools the supercharger intercooler. The engine combination has been fully validated by Mopar engineers on the dyno, as well as the drag strip, and is approved for the NHRA FSS and NMCA classes.

A unique, serialized, red and chrome Drag Pak badge sits atop the machined aluminum supercharger cover. Also under the aluminum hood, enthusiasts will see a nod to past 1970-1974 'Cuda and Challenger heritage models, with a special red and chrome radiator support "fender tag" adorned with the silhouette of the Challenger, stating the series number, the vehicle code, axle ratio and engine designation - all unique to the Drag Pak.

Should I take out a 2nd mortgage and get one of these???