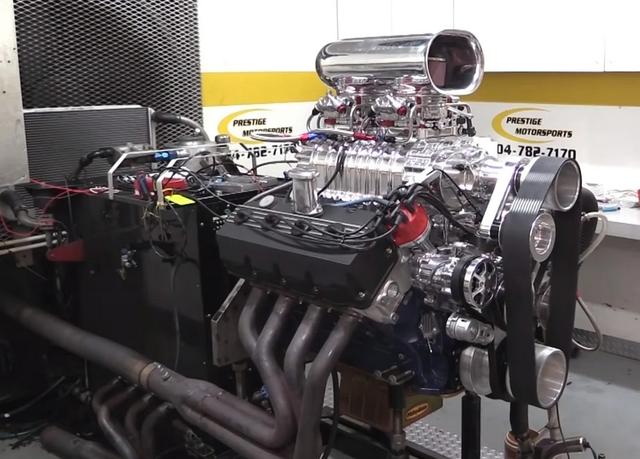 
An elephant may be big but a mammoth is bigger. We refer to the legendary Mopar 426 cubic inch HEMI as the “elephant,” but a bored and stroked 572ci version, with a blower on top can only be described as a mammoth. Prestige Motorsports recently put together just such a beast, and Jeff Huneycutt was there to record it.

Turning a standard-block 426 Hemi (good for almost 1 horsepower per cubic-inch at 425hp and a disgusting 490 lb-ft of twist) into a blown monster that will not sweat much on the way to creeping toward four-digit horsepower is a stout undertaking. In production from 1966-1971, the 426 Hemi was only produced for such a brief period by today’s standards but has withstood the test of time.

“We bored and strokes a 426 HEMI to 572 cubic inches and then throw a big 8-71 blower on top,” says Huneycutt. “On the engine dyno, we also tested how different pulley ratios affect boost and power. Finally, we tested how adding the Blower Drive Shop scoop and air filters affect power.”

And that is what all of us want to see; how these dollars affect horsepower in the end and a pick up a few tips along the way so it doesn’t grenade, but brings years of thrills while handing few beat-downs on and off the dragstrip. Destined to be installed in a 1968 Dodge Charger, this 4.500-inch bore and 3.750-inch stroke engine increase the displacement of the base 426 by nearly 150 cubic inches.

The first step after a careful bore, hone, and thorough cleaning is the installation of the rotating assembly. The Clevite bearings were installed, crank seated properly, and a couple of tricks were used on the main caps. With studs installed, the caps are seated with a dead-blow hammer versus tightening down the nuts, and the side bolts get a dab of silicone to ensure no oil gets pushed out the side of the block. The mains are torqued 100 lb-ft and the side bolts to 75 lb-ft to button it all up.

The aluminum slugs are massive units from JE Pistons. They feature a domed top to work with the hemispherical combustion chamber and are forged to handle the massive cylinder pressures. Once fitted to the rods, it’s time for one last cleaning and then to slide ‘em in. The Milodon oil pan with the center external pickup ensures all stroker clearances are maintained and the focus shifts to the long block. The cam is a big boy — a one-inch base circle with 272 degrees of intake and 282 degrees of exhaust for the moderate boost levels the HEMI will run.

Adding To The Long-Block

A pair of aftermarket Edelbrock aluminum heads were selected, which are a necessity for anything over 650 horsepower, a figure this mammoth 572 HEMI most certainly will hit. After oversized valves and stronger springs were added to the valvetrain, the heads were ready to bolt onto the block. Well, not exactly, as Huneycutt points out. The attempt at putting the long studs on the block and the shorties on the heads had to be redone to be able to slide it on.

An oil restrictor was added, since this setup is fairly unique with adequate oiling from two sources, while the stock head only has one. The combination was clamped down with Cometic MLS head gaskets and a small bit of copper spray added to ensure proper seal at high heat and boost. But before the heads were torqued, the aftermarket rocker arm and stand assemblies need to be fitted. Alternately, the rocker arm stands can be assembled on the head off the engine and the whole deal torqued down as a single assembly. Once the rockers are properly fastened, 70 lb-ft of torque is applied to the head bolts in three-rounds of tightening.

In the valley is where the exciting part of this 572 cube Hemi happens and that starts with a billet aluminum manifold sexy enough to hang on a wall (or stick a blower on). BDS was called on for one of their billet 8-71 Roots-style superchargers to force-feed the engine through the matched manifold, ensuring seamless operation and fitment. This all-billet-everything blower is a thing of beauty but will also produce 10-plus psi when provoked.

The MSD distributor was fitted pre-tune and the Quick Fuel Technologies twin carburetors were mounted atop the blower. The QFT carbs are 4-barrel double pumpers that flow a massive 1050cfm each and have been optimized to run with boost. The vacuum lines coming off the carburetors reference the pressure levels beyond atmospheric, as measured in the intake plenum. This setup offers additional fuel as boost pressure increases.

On The Engine Dyno

For timing, Prestige follows the “1 degree extra, per pound of boost” guideline, which is a general rule builders use. The baseline blower setup is initially running a 52-tooth pulley on the blower with a 59-tooth crank pulley.

The very first pull was decent, with the engine dyno soaring to 768 horsepower, but really, the Kansas-flat torque curve is where it’s at. From 3,500rpm there is over 600 lb-ft available up to 6,400rpm. Unimpressed so far? That was just the break-in run at only 3.4-pounds of boost.

The 52-tooth pulley was swapped for a 50-tooth, which made 9.4-pounds of boost, resulting in 879 horsepower. The torque is just so effortless with 700 lb-ft at only 3,500rpm all the way to redline. Now, it needs to be noted that the client will want to frame that dyno graph because with the twin air filers and the scoop installed, power and torque were down 28 horsepower and 27 lb-ft. But what the engine dyno can’t do is simulate real-world conditions and having a ram air crammed down the scoop at speed. Well, a wind tunnel dyno might come close, but that is an entirely different article.

The Elephant! Building a Stroker Hemi with a Giant Blower for a Dodge Charger
https://www.youtube.com/watch?v=xdHYvSoD0T0

This is a really cool video, I'm glad they took the time to create it. Check it out!