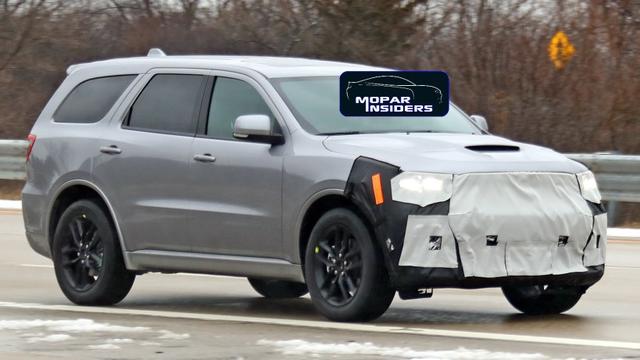 With the Jeep brand launching the all-new 2021 Jeep Grand Cherokee and a new three-row variant of the Grand Cherokee later this year, the Dodge brand will continue to build its three-row Durango for a couple more years. But it doesn’t mean that the Durango will go untouched for the 2021 model year.

But a front end refresh isn’t the only planned for Dodge’s performance SUV. The Durango will receive a new powertrain update with the introduction of the eTorque engine lineup from the popular Ram 1500 lineup. Yes, the Durango will be offered with the mild-hybrid powertrains, allowing for better fuel economy and better towing ratings for those who like to pull their weekend play toys.

We expect the updated Dodge Durango to make an appearance later this year on the auto show circuit. We wouldn’t be surprised if it gets shown off in Chicago or New York since the Detroit show was moved to the summer and it is expected that Fiat Chrysler Automobiles will be introducing the all-new Grand Cherokee and the new Ram 1500 Rebel TRX. Dodge did launch the 2018 Dodge Durango SRT at the Chicago Auto Show, so there is even a better chance we might see it there first.

The 2021 Dodge Durango will be built alongside the all-new 2021 Jeep Grand Cherokee at the Jefferson North Assembly Plant (JNAP) in the third quarter of this year. Expect the current Dodge Durango to live on through 2022, when the nameplate will go to a new body-on-frame variant based on the upcoming Jeep Wagoneer for 2023.