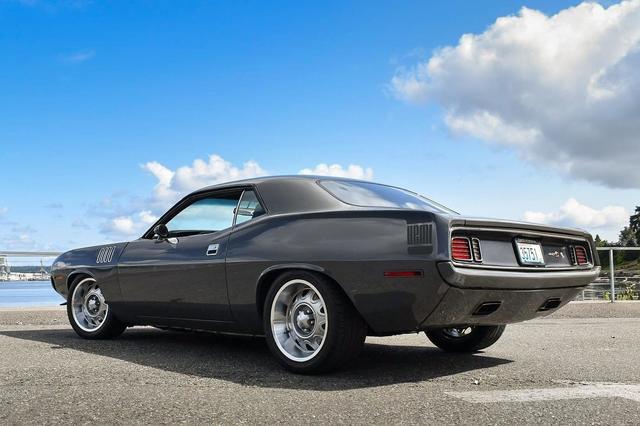 
This 1970 Plymouth Barracuda has been owned for more than five years by the seller, who completed a drivetrain swap along with other upgrades in early 2017. The car is now powered by a 6.4-liter Hemi V8 crate engine paired with a Tremec T56 Magnum six-speed manual transmission and a Detroit Truetrac limited-slip differential. The exterior was refinished in PPG Destroyer Gray over a black interior complemented by 17″ aluminum wheels, and 1971-style headlights and taillamps are equipped. A new wiring harness was installed, the brakes and suspension have been upgraded with parts from Baer and Hotchkis, and the chassis has been braced. This pro-touring Barracuda is now offered with a clean Washington title in the seller’s name.

The exterior is finished in modern Mopar Destroyer Gray from PPG using a basecoat/clearcoat system. Exterior features include front and rear flush-mounted glass, body-color bumpers, functional hood scoops, a modified front valance that uses 1970 and 1971 Barracuda parts, and a smoothed rear valance with ’71 Barracuda taillights and an SRT ’Cuda badge. Black “HEMI” hockey-stick graphics adorn both sides of the car.

17″ aluminum wheels from YearOne wear BFGoodrich Sport Comp-2 tires size 245/45 up front and 275/40 in the rear. Behind the wheels sit Baer disc brakes with 13″ rotors in the front and 12″ rotors out back. The suspension has been upgraded with parts from Hotchkis, Fox Racing Shocks, and Firm Feel. A Borgeson steering box is also equipped.

The black interior features bolstered adjustable bucket seats sourced from a late-model Mopar and upholstered in black cloth and vinyl. A billet-aluminum shifter has been installed, and USB connectivity has been added. An American Autowire classic update kit reportedly replaces the factory wiring throughout the car.

A three-spoke steering wheel fronts modified instrumentation that includes screen-printed gauges with white faces from Redline Gauge Works featuring numerical values for water temperature and oil pressure. Other interior updates include a Flaming River tilt steering column and billet hinges with shocks for the trunk lid. Approximately 6,800 miles reportedly are shown on the odometer, representing miles accumulated since completion of the build in 2017. The vehicle’s true mileage is unknown.

The 6.4-liter Hemi V8 crate engine was installed by the seller’s company, Horsepower Northwest LLC. It reportedly has been upgraded with a Hemi “274” camshaft from Comp Cams. TTi long-tube headers have been installed, and exhaust exits through dual 3″ pipes that feature an H-pipe and two MagnaFlow mufflers. The transmission used for the project is a six-speed Tremec T56 Magnum, which is mated to the engine with a QuickTime bellhousing and works through a Hays Dragon Claw twin-disc hydraulic clutch. Power is sent through a 4″ aluminum driveshaft into an 8¾” nodular rear-end housing with Yukon axles and a Detroit Truetrac limited-slip differential. Cooling is handled by an aluminum radiator with dual electric fans. The engine bay features Ringbrothers billet hood hinges and tucked wiring that has been routed through the cowl.

This is a beautiful Barracuda. I love the mix of old chassis with modern drivetrain.