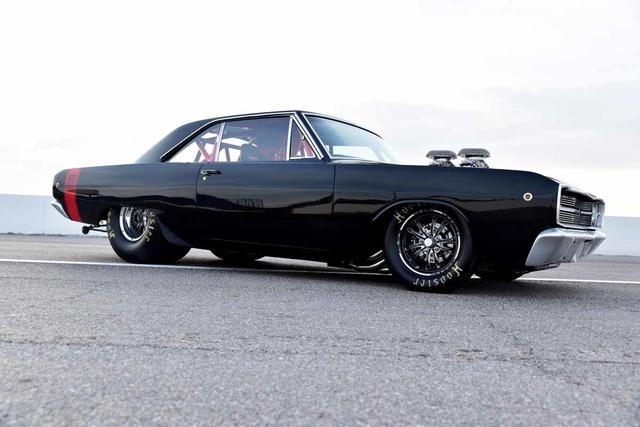 
On Hemi Day, April 26, 2018, Dodge announced their title sponsorship of the 2018 Dodge Hemi Challenge to be held at the Chevrolet Performance U.S. Nationals, August 30-31 at Lucas Oil Raceway in Indianapolis, Indiana. The 2018 Dodge Hemi Challenge will commemorate the 50th Anniversary of the birth of the 1968 Dodge “LO23” Hemi Dart and the 1968 Plymouth “BO29” Hemi Barracuda. The 426 Hemi-powered LO23 Dodge Darts and the BO29 Plymouth Barracudas were prepared by Hurst Performance as “Package” race cars intended for Super Stock drag racing competition. Though the exact number of genuine Hemi A Body LO23 and BO29 cars built in 1968 is debated, most will say the number is somewhere around 70 units.

Since their birth, the NHRA-designated “SS/AH” Super Stock Hemi Darts and Barracudas have proven to be extremely popular with competitors and spectators alike. Recognizing this enthusiasm, NHRA wisely inaugurated the Hemi Challenge in 2001 as a featured eliminator at the U.S. Nationals at Indy. The Hemi Challenge quickly became the highlight event of the year for the 1968 A Body Hemi fans across the country.

Some fifty years later, the love for the 1968 Super Stock Darts and Barracudas is alive and well. The competition is fierce, and fan following is fanatical, borderline obsessive. Indy is the Daytona 500 of SS/AH cars. A Hemi Challenge victory secures bragging rights for a year, and a very healthy payday. The 2018 Hemi Challenge victor receives the 42.6 pound Dodge Hemi Challenge trophy and $15,000 cash.

In order to gain insight into Dodge’s commitment to the Dodge Hemi Challenge at Indy, HOT ROD spoke with Mark Malmstead, Head of Marketing for Dodge SRT and Motorsports, and also with Darren Jacobs of Mopar and Dodge Public Relations. Mark explained, “At Dodge, we have stepped up our involvement in drag racing over the past few years with purpose built Drag Pak Challengers and the Dodge Demon. We have been strengthening our involvement with NHRA. This year, Dodge formed a relationship with NMCA to reach out to the grassroots racers and enthusiasts. We think it makes sense for us to sponsor the Dodge Hemi Challenge in light of the 50th Anniversary of the 1968 Hemi Barracuda and the Hemi Dart Super Stock cars. The 426 Hemi DNA lives in everything we build today, so sponsoring the 2018 Dodge Hemi Challenge just made a lot sense.”

Long time Hemi Challenge fans will notice the change from last year’s name, “Mopar Hemi Challenge” to the 2018 “Dodge Hemi Challenge”. Again Mark Malmstead shed light on the new name for the Hemi Challenge, “Dodge formed a partnership with Mopar this year. In the past, Mopar worked more on their own, but we have now formed an alliance that results in a better combined effort. At most of the NHRA events, the Dodge and Mopar trailers are together to form one of the largest displays in the NHRA midway. A lot of our marketing at Dodge is now aligned with Mopar. For the past three years, Dodge has sponsored the Dodge NHRA Nationals in Reading, Pennsylvania. Just a few months ago, we picked up title sponsorship for the Dodge Mile High NHRA Nationals at Bandimere Speedway, July 20-22. Mopar is focusing more on the team support working with the guys at the track, offering parts and components, whereas Dodge is getting more involved in the marketing end of the racing.”

Dodge created a new website, http://www.dodgegarage.com, in order to further demonstrate their support of motorsports in general. Mark Malmstead talked about their web presence, “We launched dodgegarage.com at the PRI show last December. It’s a digital content hub that provides good information for all kinds of car enthusiasts, from grassroots guys, to showcar enthusiasts, to professional drag racing enthusiasts. And it’s not just all Dodge-oriented, there is general content that involves other brands. Our hope is that Chevy and Ford guys will check out the website, and possibly be drawn to consider our products. We will have race coverage, we have been streaming some of the NMCA events, and we hope to continue to expand into other areas. It’s a good place for bringing our presence to both the Dodge enthusiast and the general racing enthusiast as well.”

To put it mildly, Dodge is interested in motorsports. Mopar is alive and well supporting racers in numerous contexts. For the drag racer, FCA support seems strong for both the Gen II 426 Hemi motors, as well as their new Gen III Hemi engines. The 50th Anniversary of the ’68 Hemi A Body Barracudas and Darts will certainly be celebrated this year by NHRA and Dodge at the 2018 Dodge Hemi Challenge. In response, look for strong support from SS/AH competitors, engine builders, and fans. To set the stage for the 2018 Dodge Hemi Challenge, check out some highlights from the 2017 Mopar Hemi Challenge at the U.S. Nationals.

Speaking of the LO23 and BO29, I still have hemidart.com and hemicuda.com in my inventory.
Someday maybe I will do something useful with them to pay tribute to those super stock HEMIs.
Scott Moseman
http://www.TheHEMI.com/
Follow us: