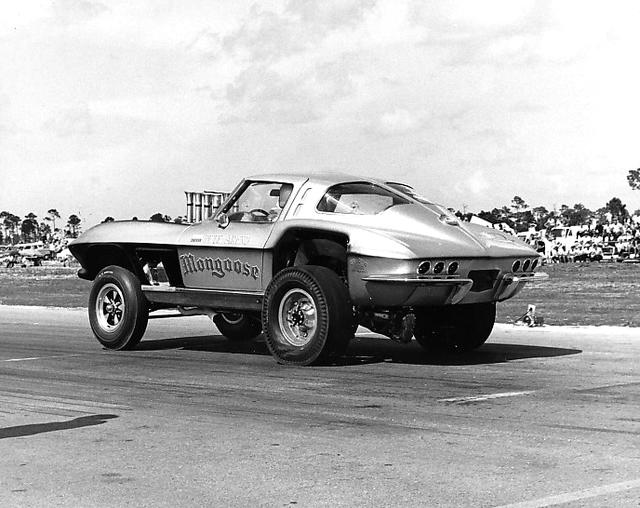 Photo from The Jim Hill Collection

Pete Arend’s “Mongoose” 1963 Corvette split-window coupe did little to relate itself to the cobra-killing, lightning-quick little creature in Rudyard Kipling’s classic novel, “Rikki Tikki Tavi”. However, Pete Arend’s “Mongoose” Corvette did become symbolic of the possibilities provided by an almost unlimited budget and an obsession to build the world’s fastest and quickest Corvette drag racing car. Arend’s obsession was also fueled by the desire to one-up the challenges presented by the AC-Bristol Cobras championed by racing legend Carroll Shelby. After all, the only creature quicker than a deadly King Cobra was its nemesis, the wily little mongoose.

Pete Arend was a wealthy socialite and competitive tournament amateur golfer who hailed from St. Petersburg, Florida. His name was also well known in the social circles of the Florida “wintering set” in both St. Pete and Palm Beach. Further cementing his social credentials was the fact that for several years he was married to Joan Forbes Arend, a lady directly descended from Horace Greely and the bluest of Boston’s blue-blood, well-connected society families.

In spite of a very active social life and frequent tournament competition as a gentleman amateur golfer, Arend became enamored with drag racing in the middle 60’s. To excel in his new-found sport he began an extensive and expensive campaign to make his ’63 Corvette into the most competitive racer he could create.

Pete Arend’s personal wealth was a resource of considerable depth, and he spared nothing in his quest to make his Corvette into the fastest and quickest in its class. That quest was best illustrated by the extensive modifications he commissioned to be made to the car’s chassis and powertrain.

Like any self-respecting C-2 Corvette Sting-Ray, it was of course modified to carry “…six taillights”, per the famed “Dead Man’s Curve” anthem regarding the perils of street racing. (With apologies to Jan & Dean)

Arend’s Mongoose was indeed a tough customer and easily a contender for the title “World Wildest Corvette”. It’s high-and-mighty stance and ten-second, 130+ mph numbers and Arend’s capable driving placed the car in the winner’s circle during its mid-1960’s era of success.

Arend was said to have early-on wanted to use the Mongoose as a match racer. Pete’s goal was to have fun competing against the A/Factory Experimental match racers made famous by racers such as Dyno Don Nicholson, Phil “Daddy Warbucks” Bonner, Malcom “D.C. Lip” Durham, Sox & Martin, Emmit “Snake” Austin, and others. The Mongoose was certainly capable, but Arend missed the “window” for A/FX match race glory when the FX cars quickly evolved into the early Funny Cars. After that, he focused on running the car in NHRA classes where it could flex its considerable muscle with maximum success.

Shown here in its glory, (Photo Copyright the Jim Hill Collection) Arend is leaving the starting line at Palm Beach International Raceway in about 1966, rear M&H tires properly wrinkled and the chassis hooked. This particular photo was shot at an NHRA Division 2 World Championship Series race (pre-Winston sponsorship) at PBIR.

Arend ran the car in B/Altered and in AA/Modified Sports. His pit area was always filled with good spirited well-wishers who enjoyed the wrench-turning aspects of fielding a race car. The car ran very well, usually at or comfortably under the existing NHRA records which were used for eliminator handicaps in those pre-Competition Index days. It was successful in Competition Eliminator, in B/A, or Street Eliminator, in AA/MSP. The Mongoose was very competitive in both eliminator brackets and Arend bounced back and forth with which class he would enter the car at each event.

Someone with Pete Arend’s pedigree and personal wealth could hardly be faulted for having his attention stray to a different attraction after a couple years of drag racing. That may have been the reason he parked his Mongoose racing team and its equipment to pursue another interest that had caught his fancy.

Curiously, in 1968 the fabled Mongoose turned up as a premier item at an auction for the public television charity in St. Petersburg. No doubt, the fees Arend paid for creation and maintenance of the Mongoose were considerable, and its donation as a charity gift returned at least a handsome tax credit for Arend’s tax attorney. The Mongoose was auction-valued at $25,000, and would easily be priced at considerably more in today’s Barrett-Jackson obsessed world of absurd collector car prices!

So, where is the Mongoose now? That’s a good question left hanging. The fabled car seems to have disappeared, much like its tiny yet formidable jungle dwelling namesake.

What a cool combination!
Scott Moseman
http://www.TheHEMI.com/
Follow us: