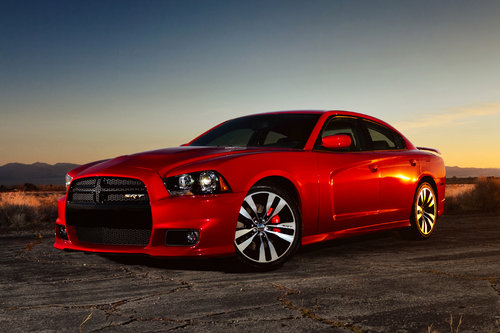 
The new product onslaught continues for the Dodge brand with the announcement today at the Chicago Auto Show that the Dodge Charger SRT8 will return for the 2012 model year.

Here's another article on the upcoming 2012 Charger SRT8...


Ralph Gilles, president and CEO of Dodge, spent most of his time talking about the Dodge R/T models that were unveiled today, but it’s clear his heart really lies within the SRT product portfolio. Gilles became much more excited when the 2012 Dodge Charger SRT8 rolled onto the stage.

The big news for 2012 is an upgrade to the 6.4-liter Hemi, which produces 465 hp and 465 lb-ft of torque. Sadly, that power is still sent to the rear wheels through an old five-speed automatic transmission, though Dodge now offers paddle shifters. SRT’s preliminary testing indicates a 0-60 sprint in less than five seconds and a quarter mile time of just less than 13 seconds. We’re looking forward to having a chance to verify those claims later this year.

I agree, that front end is a bit too much! The R/T has a different front fascia and looks much better!
Owner of the Poor Man's Hemi Cuda
Top

You guys must be too old school. I dig the front end.

The wheels, I agree, were probably not the best choice.
Scott Moseman
http://www.TheHEMI.com/
Follow us: