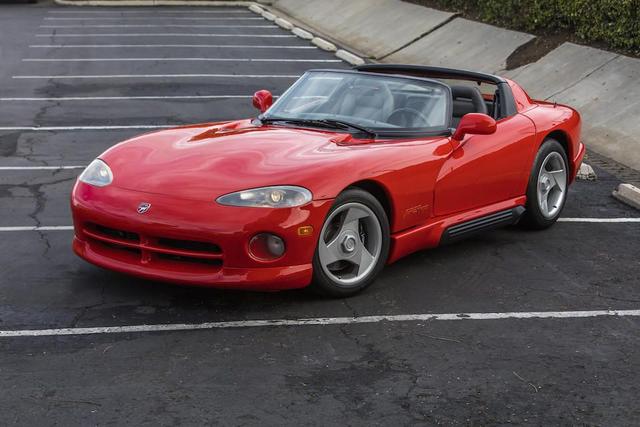 
Yesterday, we wrote about the upcoming auction of Lee Iacocca's Chrysler LeBaron Town & Country Convertible. While cool, it's not the only ex-Iacocca car set to cross the block on Thursday—Bonhams is also selling the late Chrysler CEO's 1992 Viper, the first one to roll off the production line.

Yes, this is Dodge Viper #001. It remained in Iacocca's possession up until his death last year, covering only 6220 miles since leaving the Mack Avenue assembly plant. At the press introduction for the Viper back in 1989, Iacocca declared that he'd take the first one and "I don't care what they do with the rest of 'em."

Bonhams says the car has lived in California all its life, and was serviced by a Chrysler dealer outside of Palm Springs. Presumably, Iacocca left the Viper at his house there, which would explain why it has so few miles. It looks remarkably clean, too, with a passenger seat that appears to have rarely been sat in.

The earliest Vipers, the RT/10 roadsters, are the purest examples of the breed. They lack exterior door handles, door locks, traction control, ABS, and airbags. Like the Cobra it took inspiration from, the original Viper RT/10 was just a pared-back roadster with a hulking engine. In this case, an 8.0-liter V-10 sending 400 hp to the rear wheels via a six-speed manual.

Bonhams estimates this Viper will sell for between $100,000 and $125,000 when it crosses the block Thursday. Texas dealer Viper Exchange has an RT/10 in similar condition listed for just $40,000, but the historical significance of this one can't be understated. It being the first production example and the personal car of the man who gave its blessing for production makes this one of the most important Vipers in existence. Arguably, it's the most important example. Given the history, $125,000 seems reasonable.

I love the Dodge Viper, especially the early years. What an iconic piece of history.

The Viper ended up selling for $285,000.
Hopefully it's going to find a great home!
Scott Moseman
http://www.TheHEMI.com/
Follow us: