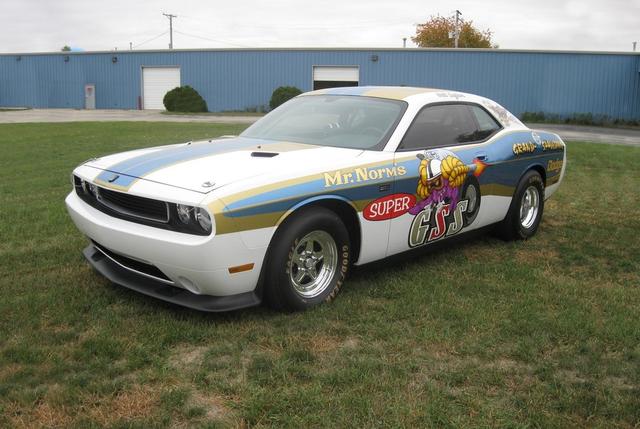 After nearly five decades of developing spectacular performance packages for Dodges, Norm Kraus certainly deserved a tribute. He got his start back in the fall of 1966, after creating the first GSS 383 M-Code Dart at Grand Spaulding Dodge. From there, “Mr. Norm” quickly became the leading high-performance dealer in the country, paving the way for countless other car builders in the years to come.

This 2011 Challenger Drag Pak features an 8.4-liter V-10 engine that is based on the second-gen Dodge Viper, but this car is designed to be a turn-key option for NHRA Stock and Super Stock race classes. With 650 horsepower and 560 lb-ft of torque, the V-10 features race headers, solid engine mounts, and a unique computer calibration. It was so fast that Dodge dealers required a signed document indicating you would not operate the V-10 on any public roadways.

This great example features blue and gold graphics, including Le Mans-style stripes, over the standard white body. The side graphics honor Mr. Norm’s Super GSS and his sponsor, Grand Spaulding Dodge. The windshield wipers, air-conditioning and heating, rear seats, and power steering have all been deleted, and the window glass replaced with lightweight polycarbonate. Other modifications for racing include lightweight race bucket seats, a trunk-mounted fuel cell, and fat rear slicks. The car weighs 3,250 pounds, about 500 pounds less than the slimmest factory Challenger. The two-speed automatic features built-in roll control and spins a one-piece drive shaft and a Mopar solid rear axle. With a track-style spoiler and pin-closed hood, the lucky new owner will have a great track car right out of the box. With only 70 built, any highly original Challenger Drag Pak car is sure to continue to appreciate in value as well as always garnering respect on the drag strip. It’s the very first over-500 cubic-inch factory-built drag car ever built, and likely to be the quickest car in anyone’s collection.

Christmas is coming if someone wants to hook me up!