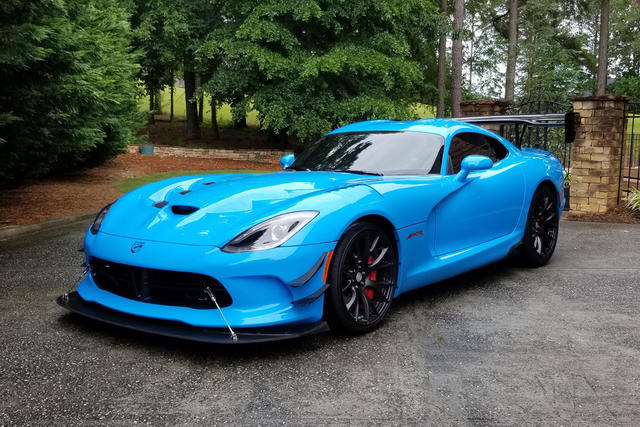 This Viper ACR Has Been Perfectly Pampered
It drives like a race car, but has never been on the track
https://www.motortrend.com/news/this-vi ... -pampered/


The Viper sometimes gets derided for being crude and low-tech, which may well be true. Its engine sounds like a tractor and cabin ergonomics leave much to be desired. Still, those brave enough to pilot the beast are rewarded with remarkable performance. And, when fitted with ACR trim and the Extreme Aero package, the Viper drives—according to Randy Pobst—like a race car. But sadly, this Viper ACR Extreme Aero, headed to auction at Barrett-Jackson, has never seen a racetrack.

This example was built in 2017, the Viper's final year of production. It's fitted with the signature 8.4-liter V-10, making 645 hp and 600 lb-ft. Behind that block is an old-school six-speed manual, which, in today's world of dual-clutch gearboxes, makes the ACR's portfolio of racetrack lap records all the more impressive. Those include at Laguna Seca, with a time of 1:28.65 set by none other than our man Randy.

Exclusive to 2017 was available paint-to-sample finishing, a $2,000 option in which a buyer could select nearly any conceivable color for their Viper's exterior. This one wears Mexico Blue, a saturated azure tone more commonly seen on Porsches. The car has also been covered by full paint protection film since new.

ACR (an abbreviation for American Club Racing) was a $19,000 package which increased the Viper's racetrack readiness. It added carbon ceramic brakes—15.4-inch, six-piston front and 14.2-inch, four-piston rear—to better handle repeated braking zones. Its 295- front and 355-wide rear Kumho Ecsta V720 tires are near-slicks developed specially for the car, and at the time provided the widest total footprint of any production vehicle. Ten-way adjustable Bilstein coilovers doubled the spring rates of lesser Vipers and raised the ACR's limits of grip.

Still not enough? The $6,900 Extreme Aero package made the Viper ACR even racier—just look at that wing. It's absolutely gigantic, among the largest ever fitted to a production car. The wing worked with an adjustable front splitter, carbon-fiber dive planes, and six-strake extended rear diffuser to provide over 1,500 pounds of downforce at 150 mph. Genuine competition-developed stuff, meant only for serious track day enthusiasts.

Despite all it's capable of on the track, this example presumably acquired its 2,890 miles on the road, and was otherwise stored in a temperature-controlled garage. There's major collectability potential here, given its final-year build and fully-optioned spec sheet. It's possible the seller will see a return on investment at this year's Barrett-Jackson auction. Still, we lament the waste of potential. The Viper ACR Extreme Aero provides one of the closest race car analogues of any road car, but behind the wheel of this particular vehicle, no one might ever find out.


Lot #664 - 2017 marked the final year of production for the Viper platform. For this final collection of cars, Dodge created a one-of-one custom collection program. Once approved for this program, a concierge team member was assigned to help design a true one-of-one 2017 Viper. The program allowed a further $2,000 option for paint-to-sample colors, and this Viper made use of this program. It was finished in paint-to-sample Mexico Blue with clear-coated exposed weave carbon fiber and, as confirmed by an included letter from the Vice President of Marketing of Prefix, the company who painted all of the 5th generation Vipers, it is the only one in the world finished in that color combination. This one-of-a-kind, one-owner Viper with 2,890 actual miles, includes the Extreme Aero Package. This package is an additional $6,900 option separate from the $19,000 ACR option. The Extreme Aero Package includes an adjustable front splitter, a second pair of carbon-fiber dive planes, extended rear diffuser and 15-way adjustable carbon fiber rear wing – none of which are present on the standard ACR. This is the setup that was responsible for the ACR setting production lap records at 13 tracks, including Laguna Seca. This car has the full ACR Interior Package in black high-grip Alcantara with silver stitching and the optional Harman Kardon 18-speaker audio system. Power comes from an 8.4-liter V10 engine with a T56 6-speed manual transmission. It has the SRT carbon-fiber hood, and comes factory with 10-way adjustable suspension, Kumho performance tires, finned differential cover and carbon-ceramic brakes with red calipers. It has been kept in a climate-controlled collection, has never seen the track, and includes everything from its original Window Sticker and price order confirmation sheet to the never-installed Extreme-Brake duct work, optional car cover with carry case, carry bag for the front splitter, and the original steering wheel cover and plastics. The Mexico Blue finish has been protected by professionally installed XPEL paint protection film since new. Additionally, a link will be provided to the new owner with hundreds of photos of the entire build, from paint mixing to assembly.

Hopefully this beautiful Viper finds a great home! (I wish it could find my home...)