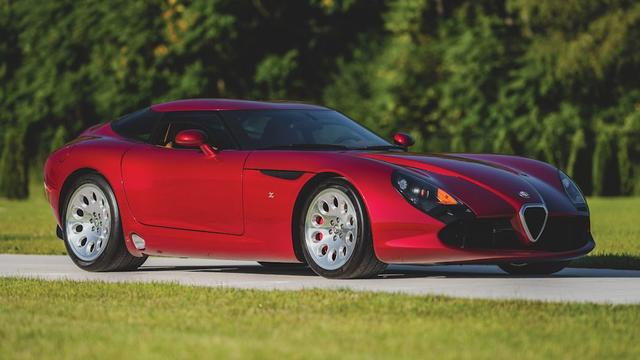 
It has been a decade since it was launched, but the 2010 Alfa Romeo TZ3 Stradale Zagato is just as bizarre and beautiful as the day it was revealed. It's what you get when you have Italian design house Zagato give a Dodge Viper an Alfa Romeo body. And this one, number six of a total of nine examples, could be yours. It's going to be auctioned in Elkhart, Indiana, by RM Sotheby's along with several other rare vehicles.

Now when we described this car as a Zagato take on an Alfa but using a Viper, that's exactly what it is. All the mechanical bits are from the 2010 Dodge Viper ACR, down to the 8.4-liter 600-horsepower V10 and six-speed manual transmission. The body does do an impressive job disguising this, from the signature Zagato double-bubble roof, to the unique, almost shooting brake-style rear roofline and Kamm tail. The Alfa grille in the nose also throws off the scent.

But look closer, and Viper elements start showing up. On the outside, the push-down flush door handles remain. Inside, the gauges feature the same fonts and layout as in the Viper, the only change being the TZ3 logo sitting in the middle. Particularly glaring is the audio head unit, which was shared with every other Dodge product on the market since the early 2000s. But the leather appointments throughout do make it nicer. Also amusing is the fact that all the owner's manuals are simply Dodge examples, with no changes to the covers or names. One other bizarre thing, since this is a 2010 car, it was built at the very early start of Fiat and Chrysler joining up. As omens go, this was a pretty solid one.

Regardless, it is an extremely striking car that's sure to be exhilarating to drive. And that's not something the previous owner experienced much, because the photos suggest it's only been driven about 200 miles. RM Sotheby's doesn't give an estimated sale price, but it should go for well into six figures, if not more. And it will sell, as it's being offered with no reserve. The auction starts May 1.

I get a Shelby Daytona vibe from the design. Fitting for a Viper powered vehicle.