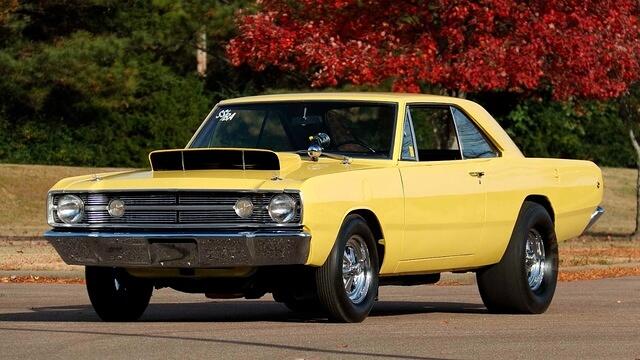 The 426 HEMI had been born and bred for racing; that examples ended up on the street was basically the result of Chrysler’s need to make it legal for those racing events. But have no doubt—it was a raw package barely detuned for general consumption. After showing up in purpose-built race cars in 1964 and 1965, the HEMI’s biggest role in door-car drag racing was in Stock Eliminator in 1966 (a World Championship) and then Super Stock in 1967 (another World Championship with a two-year-old ’65 model).

The factory built a mild 1967 race package, but redesigns to the A-body that same model year made it feasible to install the feared HEMI engine into the Dart and Barracuda models. Toward the end of 1967, plans were laid and parts were prototyped to create cars like the LO23 Dart here. This example is considered by some to be the most original 1968 Dodge Dart factory HEMI drag car in existence.

Back in 1968, these Darts were built solely to beat everything else on the planet in drag racing. The Race HEMI engine came out of mothballs for its last hurrah in a factory race package, placed into a vehicle body so seriously modified that Chrysler tersely noted via both dealer documents and vehicle-adhered decals that it was not legal for street use. Hurst Industries created a specific facility in Ferndale, Michigan, to construct them under contract for Chrysler.

Starting with 383-designed big-block vehicles and delivered to their new owners in primer with the stock camshaft and oil pan to be replaced with race parts, options were limited solely to transmission choice—either with an A833 4-speed with a Dana 4.88 differential, or, like this one was built, with a worked A727 automatic backed by a 4.86 8.75-inch differential. In the end, there were approximately 80 of these Darts constructed, each one a poison-tipped spear aimed at the heart of its competitors. Specifically created to fit right into NHRA’s SS/B and SS/BA classes, they ruled from day one until Pro Stock began and beyond. In 1970, NHRA simply reclassified the cars by themselves into SS/A by moving the indexes downward; until the latest packages of the 21st century arrived, nothing from Detroit ever came close to them in terms of performance. Today, they are the only 1960s muscle-car package to have an NHRA class still solely devoted to them, now known simply as SS/AH, for /A-HEMI.

HEMI Darts are among the most important cars in Chrysler’s legendary performance programs; as noted, many of them were heavily modified to meet changes in the racing rules. Most of the cars were raced, raced hard and upgraded considerably during the following five decades—this example was not. Back in 1977, this car was found at a car dealership in Pennsylvania by no less than the late Chrysler engineer Tom Hoover, who himself had led the HEMI engine’s initial development. Hoover in turn told Detroit’s Lou Mancini of the rare car then showing just 19.5 miles, which had an amateur custom paint job but had never been cut up nor updated to then-modern standards. Mancini initially intended to resell it, but ended up keeping it for many years as a reminder of days gone by. Though never raced, Mancini did install a Dana rear and applied the Lemon Twist paint, plus replaced one door after needing a quick replacement on one of the Mancini Racing race cars. Lou in turn sold it to a Canadian gentleman in 1982, and it later returned to the States as a collector’s item, still unraced and unaltered. Driven only on occasional, unauthorized street jaunts since 1977, the car now shows 3,799 miles.

In addition to the noted factory racing parts—the cross-ram intake with twin 770-Holley carburetors, Hooker headers, lightweight body panels, thin Corning window glass with strap mechanisms, Hurst floor-mount shifter, and more, the car features a set of period-correct Cragar SS wheels, a Stahl tach, Hurst Line-Loc, fuel pressure and auxiliary gauges, and other minor changes in keeping with its circa-1968 appearance. Even the correct SS/BA-class designation is applied. The sale will include the Chrysler Registry report, the owner’s manual, an illustrated facts manual, a 1971 issue of "Drag News," and a 2003 issue of "Mopar Muscle" magazine that featured this car.

This LO23 Dart is absolutely amazing! If you want an iconic HEMI car, look no further!