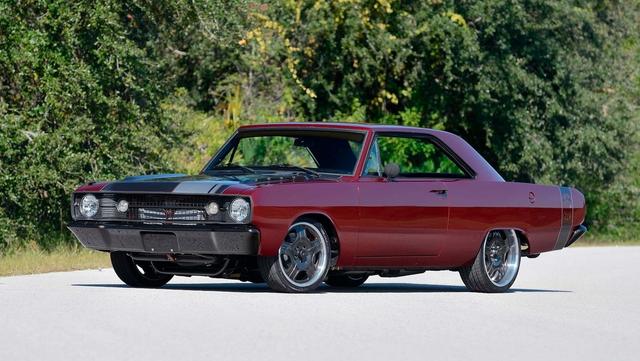 The Dodge Darts from 1968 have always had a strong following, and this car certainly builds upon that heritage. This highly modified machine—known as “Blow Dart” by its owners—is the result of a custom build completed by RMR Dreamcars in Hudson, Florida. Following that effort, it was a feature vehicle at the SEMA show in Las Vegas in 2016, but it has recently been upgraded with a 6.2L Hemi V-8 engine sourced from a Hellcat. This is the powerful factory engine that has been noted in so many periodicals, now residing in the same body the Hurst Hemi drag cars used back in the day. In this instance, the modern design has been equipped with a polished Kenne Bell supercharger and uses a Flowmaster exhaust to keep it quiet, at least at idle. With this much power potential, overdrive technology also helps, and to that end, this Dodge uses a 4L80E automatic transmission residing in the fitted transmission tunnel, connected to a stout 3.91:1 gear set in the 8.75-inch rear end. The upgrade process is carried over to the suspension, now using a modern QA1 6-link rear suspension with coilover shocks, tubular front cradle in place of the K-frame, and power rack-and-pinion steering. Bringing it down from high speeds are big SSBC 4-wheel disc brakes, and special carbon-fiber bumpers provide an additional modern touch. The outside is covered in rich wine red paint, with custom striping and graphics denoting the name and the performance-design GTS hood. The grille is blacked-out in a final touch of sinister possibilities. Inside is a far cry from the old days, as this car now has Vintage Air, Dakota Digital analog gauges, a Flaming River waterfall-design steering wheel, Rallye bucket seats and a Kilduff Lightning Rod shifter. Featuring low-profile tires, the “Blow Dart” rides on custom one-off wheels, completing its excellent stance and detailing from every angle. In total, this is a great opportunity to own a noteworthy Mopar custom that has the best of both worlds.

It seems like -everything- is getting Hellcat engines stuff in them nowadays! Very nice.