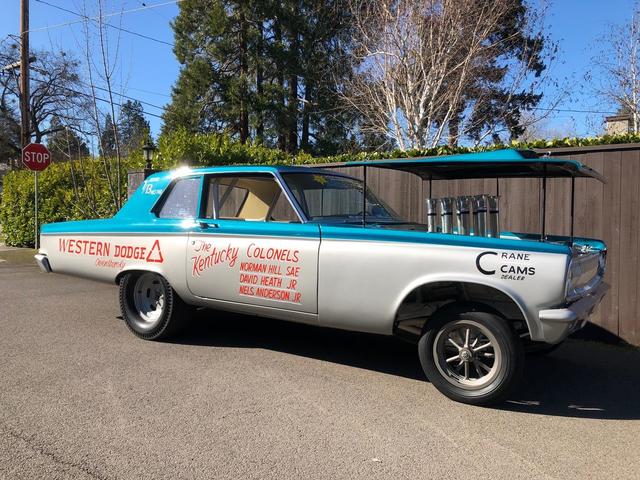 
This 1965 Dodge Coronet A990 Super Stock is a factory lightweight drag car powered by a 426ci Hemi V8 paired with a 727 Torqueflite three-speed automatic transmission. The two-door sedan was scheduled to be built on January 13, 1965 and was delivered to Western Dodge Sales and Service of Owensboro, Kentucky with fiberglass fenders and doors, a fiberglass deck lid and hood, and fiberglass bumpers. The body was reportedly refinished in blue and silver as part of a refurbishment performed from 2007–2009, and it wears graphics replicating the livery on the car when it was raced in the 1960s by David Heath. The engine is equipped with factory Alcoa-marked aluminum racing cylinder heads, an aluminum oil pump and oil pan, transistorized ignition, and a Hilborn stack injection system. Chassis modifications include a “gasser”-style front axle with leaf springs and no front brakes. This A990 Coronet A/FX Super Stock race car is now offered on behalf of the owner with Chrysler historical documentation, a certification report from Galen Govier, a photo album from the 2007–2009 refurbishment, and a clean Oregon title.

The exterior is finished in blue and silver with “Kentucky Colonel” and “Western Dodge” graphics like it wore in the 1960s. The car was reportedly shipped new with fiberglass fenders, doors, hood, bumpers, and deck lid along with aluminum door hinges for weight reduction.

American Racing wheels wear 10.50″ x 15″ M&H Racemaster tires on the rear and 135 x 380 x 15″ Sport King tires at the front. The front suspension has been converted to a “gasser”-style leaf-sprung solid axle, and no front brakes are fitted. The rear brakes are reportedly factory 10″ drums.

The interior is trimmed in tan vinyl with matching door panels, and the car was reportedly shipped from the factory with tan carpet with no backing, no rear seat or rear seatbelts, and no heater. Racing-style lap belts are fitted, a four-point roll bar is mounted behind the front seats, and a factory-style wet-cell battery is mounted in the trunk.

Factory instrumentation consists of a 120-mph speedometer and gauges for coolant temperature, fuel level, and alternator status. An oil-pressure warning light is housed below the speedometer, and a Jones 10k-rpm tachometer is installed above the instrument panel.

The 426ci Hemi V8 is equipped with aluminum Alcoa-stamped racing cylinder heads and a Hilborn stack injection system. The engine was reportedly manufactured in December 1964 and was disassembled around 2008 and reassembled to factory specifications aside from one cylinder being bored .005″ over by John and Larry Griffith. An aluminum fuel cell is mounted in front of the engine along with a coolant-overflow tank. Other equipment includes an aluminum oil pump, a transistorized ignition system, an aluminum oil pan, a forged-steel crankshaft, a factory Prestolite distributor, and as-raced S&S A/FX headers.

A 727 Torqueflite three-speed automatic transmission sends power to a 8.75″ Mopar rear axle that was factory equipped with 4.56:1 gears. Additional underside photos are included in the gallery.

I love those Super Stock HEMIs. And this one is certainly no different.