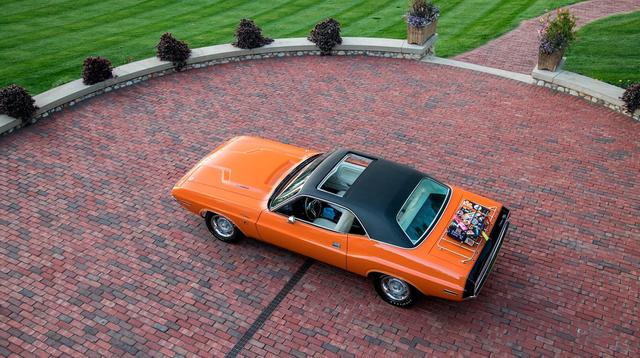 This 1970 Dodge Hemi Challenger R/T is considered “Mopar Royalty” for those who cherish unique factory options. While it is well-known that the factory built nine Hemi Challenger R/T convertibles in 1970, that first year of production also saw a total of 82 Sunroof Challengers constructed. Just one of them was ordered with a 426 Hemi as well: this one.

Indeed, the only 1970 Hemi Challenger R/T with a factory sunroof is also the final restoration performed under the direction of Steven Juliano, whose understanding of these vehicles was virtually unmatched. As a result, not only is this car extremely rare, its extensive restoration was completed using original and NOS parts that Juliano gathered to make it one of the most beautifully detailed Challenger R/Ts as well. Juliano’s attention to detail can be seen throughout. From the car’s “unobtainable” original and NOS components to the restoration’s spectacular execution and stunning condition, Juliano’s pursuit of perfection is exhibited at its finest when looking at this car.

To begin, most 1970 factory sunroof cars were given a VON (or special Vehicle Order Number), indicating special handling would be required. Tagged with the prefix K00 on the fender tag, this car is K00126. Though factory-available, sunroofs were not added on the assembly line but instead by a Detroit-area contractor named ASC following construction for that conversion prior to final shipment. Built in October 1969, this car was shipped new to California, which is the reason it features the down-turned rear exhaust exits (which is a date-coded NOS component on this car) and is coded N95 for NX controls on the fender tag.

At this time, the new Challenger was the latest (and would be the last) of the Detroit “pony cars” to come to market. Unlike the sister Cuda model, the Challenger was an inch longer and marketed toward the buyers of Firebirds and Cougars, which resulted in upscale trim levels as standard. Meanwhile, Dodge also offered a long list of optional equipment, including no less than 11 possible engines.

Of course, there was no equal to the NASCAR-bred 426 Hemi engine requested under the hood here. This engine, featuring its dual 4-barrel layout, heavy-duty internals and expansive dimensions, was by far the most prolific race-based big-block to ever come from Detroit. The buyer had opted for the A34 Super Track Pak as well, getting the A833 Hemi 4-speed manual transmission and a 4.10 Dana rear axle. Power steering and power-assisted brakes were also part of the package, as were the Hemi-specific suspension parts.

The exterior looks the part of a muscle-bound cruiser. Painted in High Impact FK2 Go Mango paint, the car was optioned in tri-color fashion, with a black roof and bumble-bee stripe coupled to a white interior. The equipment visible includes the R/T sport hood with hold-down pins, the luggage rack complete with a vintage suitcase covered with decals, the locking flip-top fuel lid, driver’s remote outside chrome mirrors and bumper guards.

The inside was even more posh, as there are bucket seats and a center console, the Hurst Pistol Grip shifter, the extra-cost six-way left-hand seat, an unrestored original dash with the N85 tachometer, an NOS rim-blow steering wheel, the pedal dress-ups and the AM/8-track player radio. A set of assembly line floor mats are also inside this car. Finally, the buyer also opted for the 15-inch Rallye wheels on this vehicle, which wear a set of rare Goodyear Polyglas GT "No Size" raised whitewall tires. These are F60-15 versions, which were only then becoming available. Taken overall, it is a level of beauty not often seen on any Hemi car.

This car was part of Steven Juliano’s car collection until Dana Mecum purchased it for his personal collection approximately 120 days before Juliano passed away. When the Juliano family entrusted Mecum Auctions to sell his cherished estate, Dana Mecum felt it was the appropriate time to offer this car to the public and add to the celebration of Juliano’s life and his respect for restoration authenticity.

For connoisseurs of rare Chrysler Hemi package cars, this is the zenith of desirability. Presenting in jewel-like condition as a result of a fastidiously correct professional restoration performed to the highest standards, this is the only 1970 Hemi Challenger R/T built with a factory sunroof.

This is from an auction last year, but I thought it was too cool to not showcase.
True one of one Challenger. HEMI, 4-speed, sunroof -- too bad no shaker hood!