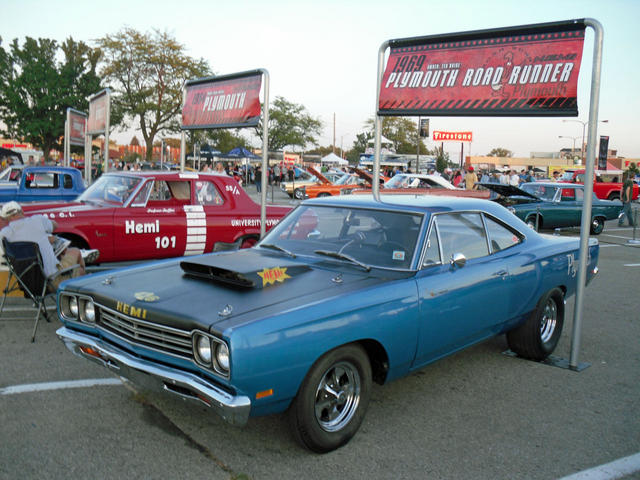 
1969 Plymouth post coupe RM21J9A244163 was ordered by me in late 1968 and delivered to Bridgeville Sales Chrysler-Plymouth, Bridgeville, PA in April of 1969. Options were hemi engine, performance hood stripes and AM radio. Standard with the manual transmission were 11 inch non power drum brakes on all wheels and 3.54-1 Dana positraction rear. Color option was B-5 blue (original paint still on car) with base black bench seat interior, red line tires and "dog dish" hub caps. Sticker price was $3980.70

The car was modified and street raced that summer and then converted to an NHRA B Modified Production drag racer for the 1970 racing seasons. The engine was modified, bored .030 with TRW 13.1 pistons installed, 1965 aluminum "K" heads, magnesium cross ram manifold with holley carburetors, Camcraft Chrysler experimental #606 cam, slick shift aluminum A833, DPFX Hurst shifter, 4.88-1 rear gears, SW mechanical tach and oil pressure/water temp gauges, Keystone Kustomag 4"x 15" wheels on front and either stock steel wheels or Keystone 8"x15" on back with Goodyear racing slicks. Suspension was 6 cylinder torsion bars, racing shocks all around with a pinion snubber on the Dana. A superstock trunk mounted battery was installed to improve weight distribution. Extensive lightening was accomplished via removal of the radio, heater, rear seat and any sound deadner. A 6 cylinder radiator was installed along with a 6BBL fiberglass hood to clear the induction system and further reduce weight. Additional weight reduction was acheived by replacing all non-structural fasteners (including the carriage bolts for the bumpers) with aluminum ones and cutting the brake drums to minimum thickness. The car weighed 3,260 lbs initially but was "ballasted" up to make the class weigth of 3,450 lbs.

Car ran a first full pass at 11.33 seconds elapsed time at 125 mph. During the season, it would set track records at Pittsburgh International Dragway, Keystone Raceway Park and Quaker City Dragway in Salem, Ohio. It won several modifiied eliminator titles and ran very close to the existing national record for the B Modified class.

In Nov of 1969, the driveline was pulled and the rolling car was sold to Denny Thomas of New Kensington, PA (later Kittanning, PA). Mr Thomas (known as "Hemi Denny") installed his own high compression engine and torqueflite transmission and raced the car for 20 years or so and then showed it at local cruises until his passing in 2009.

The car remained in his family until, quite by accident, I found it was still in existence. After four months of searching, I located the car and convinced the family to sell it back to me, it's original owner. The car needed extensive mechanical renovation but the body and modifications I had made 42 years ago were mostly un-touched; including much of the race car lettering from 1970.

The engine has been rebuilt now and car converted back to an alumimum 4 speed as it had been when I raced it. The original paint remains with only minor rust spots at base of rear window having to be repaired. It looks pretty good for 43 year old paint. The car is pretty much of a "time warp" so far as modified hemi cars of that perior are concerned. Odometer = 7,800 miles.

It's been a feature car in two issues of Mopar Muscle Magazine (July 2012 "Hidden Treasures" and Feb. 2013 "Blast from the "Past". It was also invited to be displayed at the 2012 Mopar Nationals in Columbus and then by Chrysler to be a featured car at the 2012 Woodward (Detroit) Dream Cruise. It has also been invited to be a feature display car at this summer's (2013) York Nostalgia Nationals display.

Most likely, the car will be set up to make some exhibition runs once again on the dragstrip - where it was conceived to race.