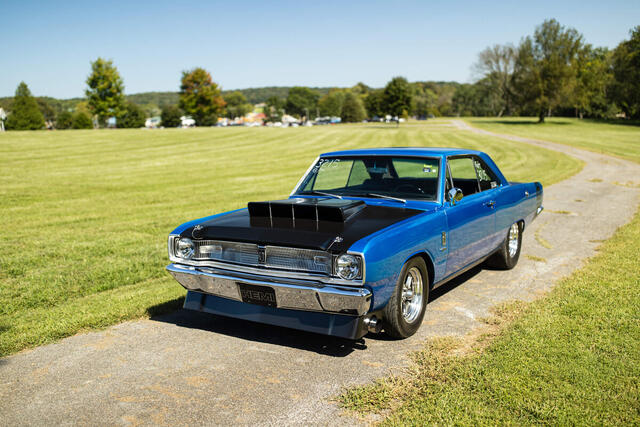 
“Most of the work I do is for industrial applications,” says Dustin Smith, who owns and operates a machine shop out of his garage in Corydon, Indiana. “But I’ve done turbo kits for some of the local guys around here, too. Even though I don’t really work on cars, per se, I meet a lot of people.”

After checking out his 1967 Dodge Dart at Holley MoParty, it’s not hard to see why. It’s a build that doesn’t necessarily shout about its merits at first glance, but the closer you look at, the more your jaw drops. “You almost need the car sitting on a lift to really understand the work that was put in,” he explains. “Swapping the engine was the easy part – the real hours were on all the other stuff.”

Following a succession of builds that include a trio of Chevy IIs and a Yamaha R1-powered side-by-side that he built from the ground up, Smith set his sights on a Mopar for his next acquisition. “I actually bought the Dart to drive while doing a turbo LS swap on my ’67 Nova,” he recalls. “But then when I got it, I realized that this was the car I needed to build.”

Purchased in March of 2018, the Dart had a 360 Magnum crate motor under the hood that was mated to a 727 automatic. He then had the Dart resprayed and the added a TorqStorm blower not long after, then drove the car as it was for a year or so before launching into the master plan. “I got the new motor in September of 2019, and on January 1st I started ordering parts for the build. I got a little carried away with it, but I got it done in seven months to the day.”

After scoring a low mileage 5.7-liter Gen III Hemi from a 2012 Charger, Smith then had to figure out how to make it work within the tight confines of the Dart’s A-body platform. “There aren’t a lot of people who’ve done Gen III swaps in Darts,” he notes. “But I like to builds things to kind of push myself and see what I can do. If people say something can’t be done, that makes me want to do it more.”

He’s also clearly not the type to take the path of least resistance, either. “I’m not the biggest fan of the engine mounts that people typically use for swaps like these,” he says. “And I figured it could be done better if I just built a K-member for it.”

So that’s just what he did, tossing the old K-member in favor of a piece he fabricated from scratch – but not before test fitting the new Hemi with the factory K-member and the existing automatic gearbox to get better sense of the packaging requirements. “After I figured out where everything needed to be, I started looking at the Mustang II suspension kits and wondering if that spindle had the same upper ball joint taper as the QA1 upper control arms that I wanted to use,” he says. “I took a gamble and just bought them, and sure enough, they actually do work – they bolt on directly.”

With a significant suspension hurdle out of the way, Smith turned his attention to the replacement K-member. “The frame rails have four main bolts that those K-members bolt into,” he tells us. “So all I really needed to do was measure the distance between the holes, so I took 2 x 2 x 3/16ths box tubing and drilled those holes out and made little pockets for those bolts to go in. After that I bolted those in the car and then built the actual crossing part of the K-member. I took dimensions off of the factory one to determine how far it dropped down from the mounting location to make sure everything was going to work right.”

That bar also supports the Dart’s rack and pinion steering, so getting it all to play nicely together was no small task. “It wasn’t my first rodeo with suspension geometry,” he says with a laugh. “I learned a lot about it when I did the buggy – I learned a lot about scrub, camber/caster, toe and how important all that stuff is, and how to determine shock locations in relation to the tire, etc. There’s a lot that goes into it, but it was definitely worth the time and effort.”

He soon encountered another challenge, though. “I wanted to use factory-style Mustang II lower control arms, too, mainly because I wanted them to be easily replaced if the car was ever in a wreck or something like that. But I missed one of my dimensions by about a quarter-inch or so, and it made the tire want to rub the fender. At that point I realized it would be easier to just make lower A-arms than it would be to remove the welded-in mounts I had. But I’m happy I did that because the new arm is beefier, and I used solid, press-in bushings that are tougher than nails. The A-arms also don’t have any room to wander, so the steering is a bit more locked in.”

With the suspension components sorted out, Smith selected double adjustable coilovers from QA1 for all four corners. Out back, a Ford 9-inch with a Strange center section sends the power to the ground, while the leaf springs have been moved inboard to make room for wider rubber and subframe connectors have been welded in to improve structural rigidity.

The 5.7-liter Hemi has seen its fair share of attention as well. The bottom end has been outfitted with a balanced crank from a 6.1-liter Hemi, along with Molnar rods and Mahle pistons, while a custom ground cam from Comp Cams and a 6.1-liter Hemi intake manifold help provide a stout foundation for the forced induction system. “I wanted to use the biggest T4 turbo I could put on the car – something that would light up quick and work well on the street, so I got a Next Gen 7875 Billet from VSRacing not long after they announced it.”

He also selected a Holley Terminator X to manage it all. “I like the Holley system, and I really wanted to run those Holley gauges. I can’t stand gauges with cheap lighting – it’s like someone standing in the back of the room with a flashlight. I wanted all the lighting in the car to be properly modern looking, and with the Holley system’s compatibility with the ECU, it was really the only way to go.”

Paired up with the largest Mishimoto intercooler that would fit in the limited space afforded by the Dart’s engine bay, Smith says the car makes about 650 horsepower on 9 pounds of boost. And that’s more an enough grunt to get this manually-shifted Dart to move out in a hurry.

“That was actually a last-minute thing,” Smith says of the gearbox choice. “It was probably about May when we made the decision on the transmission. I’d originally planned to use a 727 Torqueflite, but I really wanted overdrive – dad and I travel to a lot for different car shows and that sort of thing. So I looked into the 47RE, but it just wasn’t going to fit in the car with the amount of ground clearance I have. Then I got to talking with a buddy of mine who wanted me to go with a manual transmission and he asked, ‘What’s in the Hellcat?’”

Smith sourced a Tremec TR6060 the following day and devised a plan to get it in the car shortly thereafter. “I realized it was going to require a giant hole in the floor – it’s a big transmission,” he notes. “So I decided to just cut out the tunnel and build another one myself.”

With the big challenges now sorted out, Smith is mainly focused on ironing out the details. “It’s about 90% done and I’m pretty happy with it, so I’m working on the smaller stuff – a new fuel cell, CalTracs for the rear suspension, and maybe a six-point cage. We’ll see what happens this winter.”

And despite the substantial amount of custom work that has gone into the project, Smith says that he has no intentions of turning the Dart into a trailer queen. “People have told me it’s too nice for the track. But I didn’t build it to stare at it.”

I really dig this kind of build. I love the combo of old styling and modern engine.