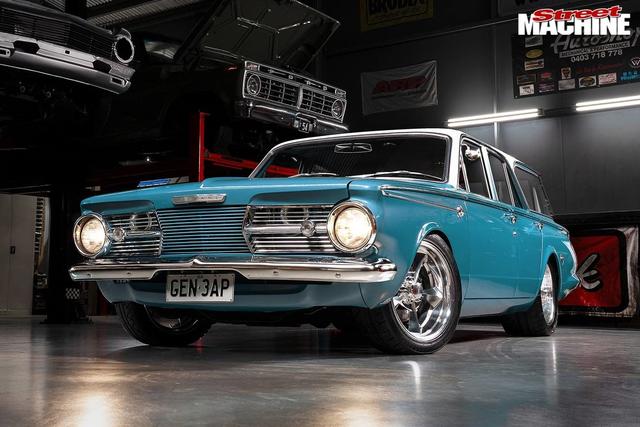 WITH LS and Barra engines regularly being slotted into cars of all makes and models right across the country, it’s refreshing to behold a late-model Hemi that’s been shoehorned into a classic car of the same lineage. “I’m pretty sure it’s the first AP with this powertrain,” says Mick Cox, owner of the 5.7-litre, Hemi V8-powered ’65 AP6 Safari wagon in question.

Mick’s a Valiant lad through and through, having grown up with the Aussie Pentastar breed in the town that manufactured them, Adelaide. “I have good memories of my parents’ mint AP5 Regal wagon, followed by a baby-blue ex-cop VK Valiant 318ci sedan,” he recalls.

Spurred along by partner Tina, Mick was keen to have a Chrysler of his own after decades in wait. You see, Tina happens to have an AP6, which Mick was keen to modify but she wasn’t. “So I waited until family life got a little less hectic to find a project of my own – a Chrysler station wagon with modern running gear added, yet keeping the old-school look,” he explains. “Something that we could throw the swag and Esky into without worrying about reliability.” Or the purists’ tears, no doubt.

Mick first spotted the factory blue-over-white wags tucked beneath a carport six years ago, so he knocked on the front door for a yarn and a gander. The bloke had purchased the AP6 from its original owner, albeit with the slant-six on the wrong side of the engine bay. Apart from that, it was a complete car.

“It was in excellent factory condition, and it had the original owner’s manual and car-care book,” says Mick. “The AP6 was first owned by a worker at the Tonsley plant, bought through a Chrysler employee scheme.”

Yet while the Val had a sterling pedigree, Mick remained steadfast on the mods he desired. “I loved the idea of running a Chrysler 300C 5.7-litre Hemi with a five-speed auto for highway travelling,” he says.

Jason Riding of Lonsdale Autoshop was entrusted with the build and was a keen backer of Mick’s fresh Aussie pro tourer idea. Jason did a fair whack of the grunt work in-house while project managing the rest of the build, incorporating a bunch of quality local businesses.

Slotting a powerful injected donk and transmission into a small-bodied 60s car required a crap-tonne of modifications and upgrades. The rest of the driveline and suspension needed to be readied for the higher-output powertrain. It also needed to be able to get the power to the ground without turning the AP6 inside out.

From factory, the slant-six offered 145hp, while Mick reckons his Hemi will eventually pump out 400hp with a hefty 500Nm of torque. To strengthen the factory frame, chassis connectors have been welded in to form a rigid base. For the new additions, a widened tunnel has been added for the larger five-speed NAG1 trans, while up the back, mini-tubs were a necessity for the 10in-wide Dragways that Mick was dead keen on.

Each of these alterations was relatively straightforward compared to fitting the behemoth Hemi into a tight engine bay. “The Hemi fits with millimetres to spare,” Mick says. Making room for the sizable addition forced many necessities to go on a diet or depart their existing locations.

Mick has kept with the factory paint scheme, yet added some bling to the PPG mix. “Trav from Warehouse 27 Automotive Refinishing added pearl to the original blue, which modernises it somewhat,” he says. “After seeing Trav’s paint on Charlie Beatty’s green Centura (SM, Feb ’18), it was a no-brainer that he would get my job, and he didn’t disappoint.”

While Summernats 33 was locked and loaded for the AP6’s debut a year out, the months evaporated quickly. “It was at the painter longer than expected,” Mick shrugs. “That gave Ben from Elite Trim limited time, yet what he delivered was amazing.” Ben revamped the VC buckets and console, fabricated a custom rear pew and restored the door cards and dash, all in a factory-black theme.

“By Summernats, the AP6 still wasn’t 100 per cent finished, so we towed it there – and we had a ball,” Mick smiles. “Next, we’re driving the wags to Chryslers On The Murray to participate in the driving events and show the complete car for the first time. I can’t wait to see the difference between the modified enthusiasts’ and the purists’ reactions!

“I believe some will be impressed and others not so much,” Mick continues, “but for me it’s turned out perfect in every way. To be honest, the car got better and better through the build; I didn’t expect it this good. I wouldn’t change a thing!”

I love wagons and I love HEMIs -- this is an awesome example of both of them!