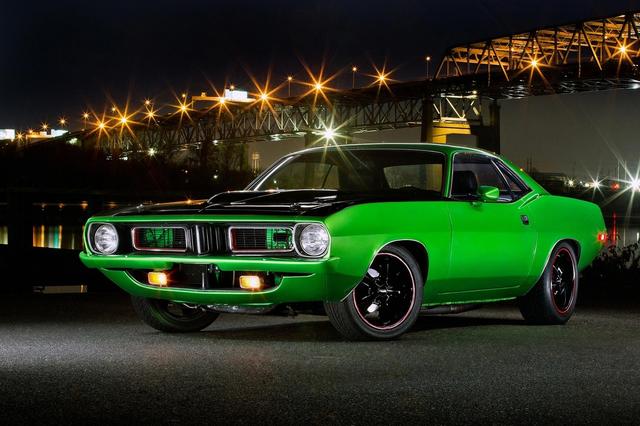 
For most of our formative years, the people around us are the ones who have the most profound impact on how we develop. For Dan Mangold, that influence came from Bill Mangold, his big brother. “He was seven years older than me,” says Dan, “and just seeing all the Hemi and big-block cars he was buying back then, I ended up being fascinated with them and it just stuck with me.” After coming of age, he too embraced the Pentastar and went through a number of B-Body Dodges and Plymouths until he hit that sweet spot with a 1972 Challenger. He was really into that E-Body, however, everything has a price. “I had a guy follow me home the one day who wanted the car. I didn’t want to sell it, but he kept throwing money at me to the point he hit my number, so I sold it. I was out of a car. I had never been out of a car.”

Money rich, but Mopar poor was now his status, and it wasn’t one he planned on for long. The search for another Mope kicked off with a few trips to the swap meet, and a look in the local paper. Two prospects popped up: A Corvette, and a 1974 ’Cuda—the last in the short-lived Chrysler line of E-Body machines. Not wanting to mess with GM’s plastic car, the idea of getting another E-Body gave him that warm fuzzy feeling—if it wasn’t a basket case. After a ride with his buddy Jim Harvey to check out the ’Cuda, in 2001, Dan drove his new fish home.

In 1974, the ’Cuda rolled off the assembly line with a 360ci small-block backed by a 727 TorqueFlite, and wearing Avocado Gold paint and a black gut. By the time Dan parked it in his driveway, it had been resprayed in red and the 360/727 combination swapped with a 340ci small-block and 904 TorqueFlite. Aside from the 904 needing a refresh, everything else was spot on—except the color. “When I saw the car was red, I almost backed out of the deal because I hate red,” he recalls. After the transmission was sorted, a number of performance parts found their way onto the 340 to the point it was ticking off mid-11-second passes. It saw a mix of street and ’strip use for a few years but when noises started coming from the bottom end, it was retired. In its place a 360 crate short-block was installed, and the much-disliked red changed. The color change was in part due the dislike for the existing color, and also signs of rust in the usual places. Dan says, “I try to do everything myself because I am not one of those high-dollar guys where I can just say, ‘here, you do all this work for me.’ I did all the bodywork myself right down to the metal work, primer, and paint in my one-car garage at home. I painted the jambs, engine, and trunk, and laid down the rest of the House of Kolor Cobalt Kandy Blue paint on the car.”

That shade of blue seemed like a good idea at the time, however, under some lighting conditions it was actually purple, and Dan wasn’t a fan of purple. He also grew tired of the existing 360’s old-school rowdy behavior. In the interim years he swapped it with a bone-stock 360, and the blue gave way to Synergy Green Metallic, a 2010 GM color. Once again, all the work was done at home in his garage, but with this color swap he had his friend Keith Knowles tackle the paintwork.

As with the color swap, the winds of change under the hood gained momentum as well. “I like change.” he notes. “I got a sweet deal on a crate 5.7 Hemi that had never been in a car.” After landing that bit of kit, he started planning the swap and gathering the parts needed. A good portion of that effort was spent online on forums seeking advice on how to do it in the least painful way. On that swap list was also an overdrive transmission. He looked at the various options, and most required the floor to be cut up, which was something he didn’t want to do. Using an A500 transmission out of a 1989 Dodge Dakota pickup solved both of those issues. With his homework done, dropping the new drive train in came down to fabricating a set of engine and transmission mounts. For him it was all very straight forward, however, he does admit that the wiring was overwhelming. “I laid it all out,” he recalls. “When you start looking at that harness—it’s a lot of wiring.” Some of this work required an extra set of hands, and Dan was grateful for the assistance of Walt Haas to get the car wrapped up in only a few months.

The 5.7 install completely changed the ’Cuda’s demeanor in a positive way, and Dan’s satisfaction was fulfilled for about five years, but the desire for more power was always there, and he knew that meant upping the game under the hood once again. Always on the lookout for a bargain, the prospect of a reasonably priced upgrade came courtesy of a wrecked 2010 SRT8 Dodge Charger that had been stuffed in the rear. As that plan moved forward, the new mill was sent to Fonse Performance in Erial, New Jersey, for a full stock rebuild. After its completion, the installation once again took place at home and it was almost a plug and play process. Dan only needed to modify the exhaust flanges to match the ports, and lengthen a few wires. Rated at 425 hp and 420 lb-ft of torque, Dan says, “Iit gets the job done, and I get good gas mileage as a bonus.”

Does Dan want more? Well—yes, maybe. For now the bump in power over the 5.7 is significant, but he’s been toying with the idea of slapping a blower on the 6.1. When asked if he’s ever going to be done with the ’Cuda, the answer is that it’s always a work in progress. Above all, for Dan this car is a look to the future, and a tribute to the past. He hopes his daughter Katie will one day enjoy it, and it serves as a lasting memory of his older brother Bill, who passed away in 2000.

Engine
When Dan acquired the ’Cuda in 2001 it was powered by a 340 small-block, but it was originally built with a 360. Over the years, the old-school Chrysler mill was retired in favor of a modern Mopar mill. The current engine in the ’Cuda is a 2010 6.1 Hemi. Dan had it rebuilt to factory specs at Fonse Performance in Erial, New Jersey, and it pumps out roughly 425 hp and 420 lb-ft of torque at 6,000 rpm. It retains the deep-skirt cast-iron block with cross-bolted main bearing caps and aluminum alloy Hemi heads. On the bottom end it has a forged crank, forged connecting rods, and 10.3:1 aluminum flat-top pistons.

Induction
Like the rest of the engine, the induction system is factory stock and consists of a cast aluminum intake manifold to accommodate the Chrysler electronic multi-port sequential fuel injection. The air-fuel mixture ignites via two spark plugs per cylinder and is fired by individual coils for each cylinder. Engine management is also done via an SRT factory ECU. Exhaust duties are handled by a set of Doug Thorley 1-5/8-inch headers mated to 3-inch stainless pipes that run back to a set of Magnaflow mufflers.

Transmission
An A500 overdrive transmission sourced from a 1989 Dodge Dakota pickup is what is currently sitting behind the 6.1 Hemi. Dan had his buddy Tom Cangelosi massage the internals, which included the installation of a modified valve body and the addition of Dynamic Powertrain 2,500-stall speed converter.

Rearend
The factory 8 ¾-inch rear housing is still the original one that came on the ’Cuda. When he was racing, a set of 4.30:1 gears were installed. With his focus shifted towards street drivability, it is now fitted with a DoctorDiff Trac-Loc differential fitted with a set of 3.73:1 gears. The stock rear axles were also swapped with a set from Yukon Gear & Axle.

Suspension
The front suspension is still factory Chrysler with a small-block K-member and a torsion-bar setup. It was given a complete rebuild and a Hotchkis 1.25-inch sway bar. At the rear Dan fabricated a set of custom offset spring hangers that allowed him to move the springs inboard and also gave him additional ride height adjustments. KYB shocks at all four corners were added, and a set of frame connectors installed by him at home.

Wheels & Tires
Rolling stock on the ’Cuda comes from a combination of Foose wheels and a mix of tire brands. Up front a set of 17×7 Foose Legend wheels were wrapped in Nankang Sport NS-1 245/45R17 tires, while the rear are 18×9 Foose Legend wheels mounted on 255/50R18 Toyo Proxes ST tires.

Body/Paint
The body on the ’Cuda is still wearing all its original sheet metal. Dan had to patch a number of areas that were beginning to rust prior to the first color change, and then some more when the AkzoNobel basecoat/clearcoat 2010 Synergy Green was applied. The ’Cuda Sport hood was the only item changed. When the switch from red to the Cobalt Kandy Blue was done, he bought what he describes as an ill-fitting fiberglass reproduction AAR hood. At the time he was focused more on the racing, so visual aesthetics weren’t at the top of his list. When the green switch was planned the hood was replaced with a proper AAR reproduction hood that was actually a Craigslist find.

Interior
The interior on the ’Cuda is a mix of old and new, with the bulk of the door panels, headliner, dash assembly, and instruments still original. Dan did add an Auto Meter tach, gauges, a set Audi A4 power seats, and a JVC in-dash receiver and Alpine speakers. The console and shifter are also factory E-Body and original to the car.

This is a pretty clean 'Cuda and I always love a good restomod with a modern HEMI.