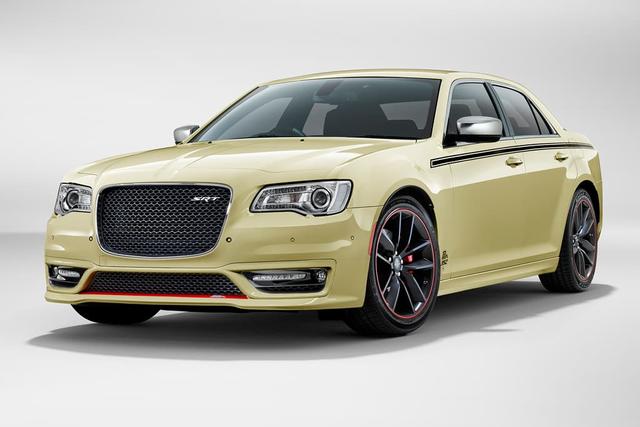 Fiat Chrysler Australia has announced it will celebrate the 50th anniversary of the locally-made Chrysler Valiant Pacer with a limited-edition version of the Chrysler 300 SRT muscle car, just as we forecast back in May.

The official confirmation came this morning, when FCA Australia revealed a one-off Chrysler 300 SRT Pacer ‘tribute’ car to mark five decades since the Pacer nameplate was born in 1969.

“To further celebrate the iconic Australian-made 1969 Chrysler Valiant Pacer, Chrysler Australia is excited to announce that a limited edition production variant will be released soon,” said FCA Australia at the bottom of a press release.

It’s not yet clear how closely the tribute car you see here will resemble the Chrysler 300 SRT Pacer limited-edition, for which Chrysler Australia is already taking expressions of interest via its public website ahead of its official reveal and release next week.

But it should wear the same signature design themes that recall the 1969 Valiant Pacer, including a heritage Wild Yellow colour scheme replicated via a full vehicle wrap, black side stripes and 20-inch Black Noise alloy wheels with a red stripe to match the red decals on the front splitter and rear bootlid.

Of course, they replace the ‘Pacer 225’ badges of Chrysler Australia’s original Valiant Pacer, which arrived with a 225 cubic-inch (3.7-litre) straight-six and was aimed directly at homegrown V8 performance cars like the Holden Monaro GTS.

Launched with a 130kW slant six matched to a three-speed manual gearbox, the first Chrysler Valiant Pacer was only available in three colours – Wild Yellow, Blue and Red – and featured black exterior side stripes and red highlights on its grille and boot lid.

The 2020 Chrysler 300 SRT Pacer special-edition will be based on the HEMI V8-powered SRT Core, which is currently priced from $67,000 drive-away and does duty with the NSW Police highway patrol.

While the original 1969 Chrysler Valiant Pacer was built exclusively for the Australian market at the Chrysler factory in Adelaide, the latest Chrysler 300 SRT is made in right-hand drive form exclusively for Australia in the US.

As Chrysler is keen to point out, the 300 SRT remains the last affordable V8-powered rear-wheel drive sedan available in Australia following the end of local Holden Commodore and Ford Falcon production.

The born-again Pacer variant could form part of an updated MY20 Chrysler 300 line-up, but diesel and wagon versions of the long-running large sedan are unlikely to make a return.

Chrysler Australia director of product Guillaume Drelon said the reintroduction of the Pacer nameplate after a 46-year absence will celebrate the golden anniversary of an all-Australian automotive icon.

“We’re excited to bring to life a modern interpretation of an Australian classic, the Chrysler 300 SRT Pacer tribute car,” he said.

“Highlighting the signature details of the original, the Pacer tribute takes inspiration from the iconic design cues of the celebrated 1969 Valiant Pacer.”

Chrysler Australia’s Pacer badge first appeared on a modified performance version of the VF-series Valiant in mid-1969, but only lasted four years.

The original Chrysler Valiant 225 Pacer was replaced by the facelifted VG-series Valiant Pacer of 1970 – the first and last Pacer to be offered in two-door Hardtop body style – fitted with an all-new HEMI 245ci (4.0-litre) straight six in three different tunes.

When the first fully Australian-designed Chrysler Valiant appeared in June 1971, the VH-series Pacer packed a 265ci (4.3-litre) six that accelerated it to 100km/h in 7.6 seconds on its way to the quarter-mile in 15.9sec and a 185km/h top speed – making it the fastest Australian-made six-cylinder sedan for the next 17 years.

However, just 1647 VH Valiant Pacers were produced before production ceased in May 1973 with the arrival of the VJ series, by which time the new 1971 VH Charger had become Chrysler’s best recognised model.

Following Mitsubishi’s purchase of Chrysler’s Australian operations in Adelaide, which went on to produce the Sigma, Magna and 380, local production of the Chrysler Valiant ceased in August 1981 after 565,338 sales. It took the US brand almost 25 years to offer another large car in Australia.

Former FCA Australia managing director Steve Zanlunghi told carsales earlier this year there was no end date in sight for the Chrysler 300 SRT, and that the Pacer special would demonstrate the company’s commitment to the aged muscle car.

Sadly, there’s still no sign of a revival for another iconic Australian Chrysler Valiant nameplate – Charger – which Zanlunghi had hoped to dust off for a locally converted version of the Dodge Challenger coupe to rival the Ford Mustang and HSV’s ‘remanufactured’ Chevrolet Camaro.

A little something for my Australian visitors. This looks like a pretty cool tribute.