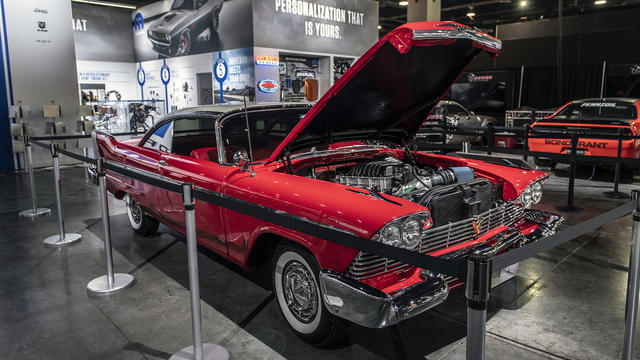 
We’ve seen Plymouth Fury “Christine” re-creations before, but probably not quite like this one. It’s a 1,000-horsepower version of the red-painted 1958 Fury of film infamy, thanks to the addition of a Hellephant crate engine.

The SEMA build comes courtesy of the folks at "Graveyard Carz," the reality show about Mopar muscle-car restorations, who swapped out the original 305-hp V8 Golden Commando factory engine and installed a 426 cubic-inch supercharged Hemi crate motor, which also puts out 950 pound-feet of torque. This presumably ups the evil quotient in the car, which takes its name from the 1983 horror film of the same name by director John Carpenter, an adaption of Stephen King’s 1983 novel about a car imbued with a malevolent, murderous spirit — a sort of proto-autonomous vehicle gone horrifically wrong.

Along with the Hellephant is a variety of other non-original components, including MagnaFlow "turbo mufflers" and performance alloy axles. "Graveyard Carz" also notes the version used in the film already veered from the factory version, since Carpenter opted to use a more sinister-looking two-door hardtop version — King’s Fury was a four-door. The former was never available in red, only in a beige with gold trim, a combination that would hardly strike fear the hearts of movie-goers. The rest looks pretty gorgeous, with those signature tail fins and dazzling anodized aluminum stripes down the sides, quad headlamps and wide, chrome grille.

According to Hagerty, the film cycled through more than 20 cars, not all of them Furys and some of them only for their parts, and it understandably did a number on them: Only a few cars emerged unscathed when filming wrapped up. Those that did hit the road afterward to promote the film.

Just 5,300 versions of the 1958 Fury were ever built with the Golden Commando engine, and only 41 are believed to still exist.