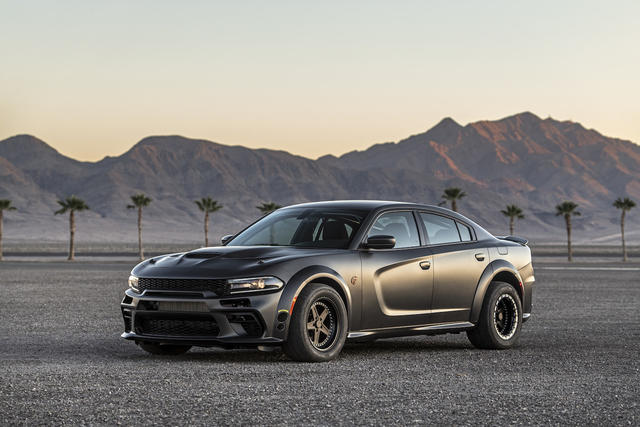 
Alex Palmero, already the owner of the quickest Dodge Demon in existence, wanted to give his brother, Gigi, the best birthday present possible. Gigi was the reason why Alex grew up a Mopar fan, and Gigi had taken a liking to the carbon-fiber-bodied Demon that Alex was using to tear up the dragstrip. Alex knew his brother was always a fan of four doors, so for his ultimate birthday present, Alex asked Speedkore and Gearhead Performance build an even more powerful and radical Mopar this time around—a Charger widebody.

The biggest, baddest Mopar sedan available is the Dodge Charger Hellcat widebody. Unfortunately for Speedkore, those cars weren’t yet available in time for this build. Instead, things started with a Charger Pursuit, the police version, It made sense; the car would be gutted anyway, a lightweight version was preferable as a starting point. Dodge did come through with a widebody to be 3D-scanned and Speedkore used its measurements to build carbon-fiber panels to replace the front bumper, fender flares, hood, rocker panel, rear spoiler, rear bumper, and rear diffuser.

Considering Gigi’s car would start with a bit of a weight penalty due to its four-door size, Alex decided to give him an even burlier engine than the one in his 8.6-second Demon. They both use 6.2-liter Demon V-8s built by Gearhead Performance that forgo the factory supercharger in favor of a pair of Precision 6466 ball-bearing billet turbochargers, but the powerplant in this Charger uses a set of Thitek cylinder heads to help handle even more power. At current boost levels (26 psi) the 6.2-liter Demon V-8 produces 1525 horsepower. Gearhead says there’s more on tap if necessary.

What really sets this Charger apart is its drivetrain. A Hellraiser Performance-built transmission with FTI torque converter is mated to a custom billet transfer case by Traction Products. It sends power to the front wheels with a carbon-fiber driveshaft from The Driveshaft Shop. Those wheels, and the pair out back, are from Bogart and they’re all shod in Mickey Thompson ET Street tires for violent, spooled-up launches.

The car made its public debut at the Magnaflow booth at SEMA because the Charger uses a dual-mode exhaust that keeps things quiet for street duty by routing gases through a MagnaFlow Competition Series exhaust. It’s a three-inch stainless steel dual exhaust with a dual-split rear exit. At the dragstrip, an exhaust valve can switch to dump the exhaust out the front bumper and bypass what little restriction is offered by the full-length system.

We were on hand for the car’s first unveiling, when Gigi got his first look, as well some of the Charger’s shakedown runs as the Gearhead Performance team learns how to make the most out of the Charger’s unique drivetrain. With promises of more power from the 6.2-liter V-8 we’re dying to see what this Charger can really do when pushed to its limits.

Man, it must be fun to build a car when you don't have any budget!