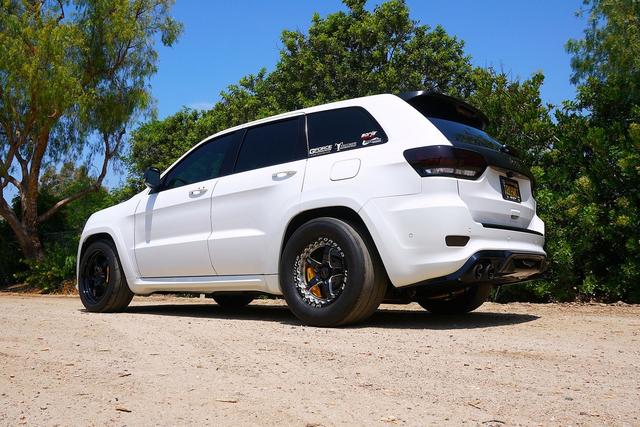 An 1,150-HP Jeep Grand Cherokee Trackhawk? Sure, Why Not!?
All that power translates to 9-second quarter-mile runs—and lots of broken hearts.
https://www.automobilemag.com/news/1150 ... tom-tuned/


In terms of sleeper vehicles, Jeff Wollerman’s 2018 Jeep Grand Cherokee Trackhawk is not the most subtle. The blackout hood and racing stickers in the rear quarter-window tip you off to the performance abilities of this unusual platform, but those are the only obvious tipoffs to regular folks. Unwary competitors at the drag strip might be of the mind that this SUV looks kinda special, but then it’s still just an SUV, right? But when the Trackhawk clicks off 1.40-second 60-foot times, they find out just how fast this four-wheel-drive Mopar really is.

Wollerman’s 2018 Jeep Trackhawk is the latest in a line of very fast cars that have filled the family garage in Camarillo, California. A successful union crane mechanic in nearby Port Hueneme, California, he knows a lot about machinery, both on the dock and on the track. He has personally owned a lot of the hottest cars today, such as a 2017 Camaro ZL1, a Corvette, and a Hellcat. But when the Trackhawk arrived on the scene, he knew he had to have one.

“I found one in the [San Fernando] Valley with only a few options,” Wollerman tells us. “It had red seatbelts and black forged aluminum wheels, but no sunroof, extra speaker system, or tow package. This was the lightest 5,000-plus-pound Trackhawk I could find,” he adds with a chuckle.

As is not surprising, Wollerman was impressed with the Trackhawk’s performance, but not fully satisfied. Not willing to leave well enough alone, he started sourcing performance parts. First he asked Borla to create a proper 3-inch-diameter tubing exhaust system. Working with Alvin at Borla, they developed their first exhaust systems for the Trackhawk platform. Borla prototyped both an S-Type and ATAK-style muffler system from Wollerman’s vehicle. Due to its deeper exhaust tone, Wollerman picked the S-type, which is what the car wears today finished off with a set of quad carbon-fiber tips.

“Next, I searched for a tuner and came across the Livernois Motorsports line of products,” says Wollerman. “After speaking with Scott Michele, I went with their S-1025 mail-order kit, which included a 2.85-inch-wide upper pulley from Innovations West to overdrive the lower balancer by nine percent. To ensure that the crank pulley stayed in place, he pinned it to the crankshaft, an effort that took extra time and skill.”

Wollerman decided to shift his propellant to E-85 and added new fuel-injection-enhancing components, a 180-degree thermostat, a transmission tune, and NGK spark plugs. Livernois reworked the computer, also sending Wollerman a laptop to fine-tune the Jeep’s computer to get everything spot-on with regards to both street and race performance, since the rig still sees dual duty.

“I was so impressed with the power from the Livernois S-1025 kit that I had to change my driving style, moving the shift points to 6,800 rpm,” explains Wollerman. “The Trackhawk now pulls like a freight train on acceleration! I also learned a lot about performance upgrades from the Trackhawk Facebook page. It was at this point in the car’s transformation that I set my sights on getting the SUV into the nines in the quarter-mile.”

Frankly, that seemed like a logical move considering that, with the changes to date and the sticky Mickey Thompson Street tires, he had launched the SUV to quarter-mile times of 10.4 seconds at 131.72 mph. What was most impressive to Wollerman was the 1.640-second 60-foot times he accomplished, helped by the additional grip afforded by all-wheel-drive system noted earlier.

As you might expect of a highly qualified mechanic, Wollerman executed all of the mechanical changes with the exception of the Livernois computer programming. That includes all of the blacking out of the body trim that gives the SUV its sinister looks. Combined with the blacked-out wheels, this SUV makes a statement in both traffic or on the track.

So did Wollerman achieve his target of a nine-second quarter-mile time? You bet! The momentous achievement occurred in March of 2019, after a retune of the computer and change to a 2.75-inch-diameter pulley to help turn up the boost to a full 22 pounds. With an estimated 1,150 horsepower at 6,600 rpm and 1,000 lb-ft of torque, these drag-strip timing achievements are not surprising.

If you line up next to Wollerman’s SUV, prepare to get your heart broken!