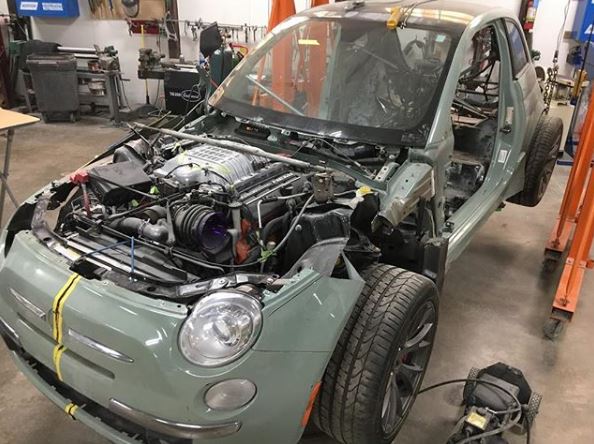 Hellcat-Engined Fiat 500 Is Real, Actually Based on a Charger
https://www.autoevolution.com/news/hell ... 35125.html#


It's no secret that Fiat Chrysler has to face the temptation of Hellcat-ing everything. However, while this has led to the migration of the supercharged HEMI from the Dodge twins to the Jeep Grand Cherokee Trackhawk, no other production model of the sort has been delivered to date (no, concepts such as the Dodge Durango Pursuit Speed Trap don't count). As such, it seems that certain Mopar aficionados out there have decided to take the matter into their own hands, which, for instance, is how we ended up with this Fiat 500 wielding a Hellcat motor.

Now, as you might recall, a Hellcat heart transplant for the tiny Fiat was the topic of an April Fools tale that haunted the web back in 2017.

However, the project we have here is real. In fact, the build is handled by Pensivania-based Hahn Auto Restoration. Nevertheless, the last update on the build seems to come from September 2018, when we were also promissed further info.

I'm talking about the piece of footage at the bottom of the page, which documents the first stages of the build.

To put it shortly, the specialist bought a crashed Dodge Charger Hellcat and a Fiat 500. From that point on, it was all about placing the body of the Italian icon on top of the muscle sedan.

Of course, since we're not talking about LEGO here and cars no longer rely on the body-on-frame recipe nowadays, the efforts went from a scale model marriage to 3D scanning and real-world trimming.

After all, the Charger and the 500 aren't exactly the same size and the body of the Fiat has to stay largely the same in order for the project to work its magic.

So here's to hoping this modern-day interpretation of the 50s Topolino HEMI culture (read: small pre-war Fiats being cast in the role of dragsters via American V8s) does come to life in the end.

Meanwhile, you can check out the YT video and Instagram post below (the latter might actually be an update, showcasing the supercharged 6.2L V8 in the car) for more details on this wacky racer - I've reached out to the shop behind the build and will return with updates as soon as I get my keyboard on them.

I need to hear/see more about this project. I hope they can finish it!