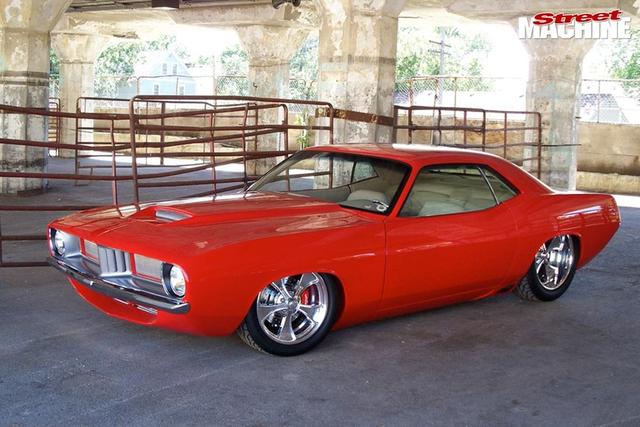 IT’S nice to have mates whose dreams run parallel with your own. About three years ago, when old friends Glen Baugus and Ronnie Owens were bench-racing about their street machine dreams, they found a shared desire to create something well beyond the average streeter. Glenn wanted to own a truly magnificent car and Ronnie wanted to build one.

Ronnie owns Ron’s Motorworks in Bernie, Missouri, a used car and truck dealership. That’s not the usual birthplace for a show-stopping street machine but it has given him years of experience with panel and paint. He’d never built a ground-up custom but following his dream he created this awesome Plymouth Barracuda.

Glen and Ronnie live in a tiny agricultural town that’s far from the heartbeat of custom car activity and they spent months just convincing themselves that their dreams could come to life. Figuring out what car they’d use took even longer and when Glen decided on a Plymouth Cuda, it was a frenzied search across county, state and eBay before he finally landed this 1972 model for $6,200.

The style and detailing that Ronnie’s built into the Cuda makes him serious competition for the sport’s established stars. He might shrug shyly about his work but it’s not just us saying it: the Cuda picked up three Boyd Coddington Pro’s Picks at Goodguys events, along with several other ‘Best In Show’ awards this year.

The Cuda deal was done on a handshake. No drawings, written plans or work-sheets; Ronnie explained his vision for the car, Glen agreed and Ronnie started into the project while Glen figured out the drivetrain, suspension, wheels, tyres and colour.

“Once we bit the bullet, the Cuda took on a life of its own,” Glen says. “Ronnie never stopped. He was the artist creating a masterpiece. You could see it in his eyes and feel it in his shop. It was a quite a buzz! I’d hate to think how many hours of work are in the car. Having built some other rods, I could see Ronnie had become a perfectionist.”

Ronnie also put in hours researching how the car would sit and what sort of frame the stripped tub would need. He reworked the stock unibody with additional frame rails and a front tubular sub-frame in mild steel, then custom-built the air-bagged four-link/wishbone rear suspension to carry a Currie nine-inch axle stuffed with a Detroit Truetrac LSD and 3.70 gear-set.

Billet Specialties Fuelie wheels look perfect under the coupe, with 18x8s up front and 20x10s on the rear. These are wrapped with 245/45 and 295/45 BFG T/A rubber respectively.

Ronnie’s a metal whizz, though you can’t get him to admit that. There’s not a wobble in any panel and the door gaps are perfect, which is a big ask on a door-sagger like the Cuda. Apart from the bumpers and the headlight rings Ronnie shaved all the trim, leaving only a thin lick of OEM chrome where the rear quarter glass mates to the front side windows.

The rear panel is all-new, featuring custom round LED tail-lights and a lower rear valance with an inset and frenched numberplate. Both bumpers were shaved and reset to the body for a tighter fit.

The bonnet is another neat custom touch. Ronnie melded the stock metal with a Dodge Ram SRT bonnet skin. This gave him the entry for the cold-air induction and raised the hood over the induction runners on the late-model 6.1-litre Hemi V8. The opening features a custom polished stainless mesh insert and trim that looks so clean that it looks like an original option. When closed, the cold-air scoop settles directly onto the K&N filter in the cowl air-box.

In the engine bay, Ronnie created a whole new look, surrounding the twin Paxton-supercharged Hemi with a moulded firewall, inner-fenders and the custom cowl-induction set-up.

With the sheet-metal straight, he disassembled everything then prepped and painted it with four over four of colour and clear in PPG True Red. The finish is genuinely up with the best.

Ronnie then wrenched it all into place, creating engine mounts to hold it all, modifying the headers, sorting the custom induction plumbing, fabricating old-school Hemi valve covers and added some fine colour and chrome details. On the dyno, running seven pounds of boost, the Hemi punched out 650hp.

Next, Glen took the Cuda to Dave at Lewallen Interiors in Cleveland. Ronnie had prepped for the interior make-over by installing the console, the Classic Instruments dash and pre-fitting a modified Pontiac G6 dash pad. This allowed Dave Lewallen to cover the lot in light taupe (grey-brown) leather. The single-tone effect carries to the matching wool carpet and door panels, and it’s highlighted by the Memphis Stereo sound system and billet pedals and steering wheel. There are four bucket seats and a cabin-splitting centre-console. Each seat is finished with a jewel-like chrome highlight trim.

When you talk with Ronnie, you pick up a satisfied tone in the conversation; chatting with Glen reveals a similar sentiment about building a dream. The Cuda clearly reflects a fortuitous meeting of minds but when you remember that this was the first full custom Ronnie had ever built, you know dreams can come true.

I'm not sure when was the last time I saw a twin supercharged engine?