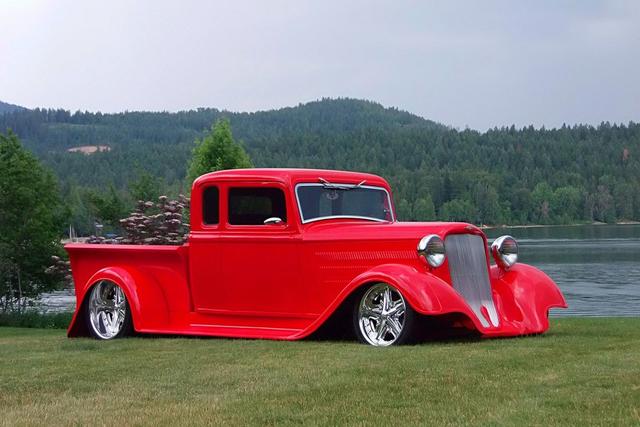 This 1934 Dodge Pickup is Five-Windowed, Hemi-Powered, and Homebuilt
https://www.hotrod.com/articles/1934-do ... homebuilt/


Never underestimate the influence of a jacket. Chet Jackman from Sagle, Idaho, said he was wearing his jacket lettered with Vintage Mopar when a stranger approached him and started telling him about the 1934 Dodge pickup his uncle owned. The family had purchased it new and the truck had been passed down for three generations. The beloved Dodge was always stored in the shop for safekeeping until the day the shop caught on fire and the family truck was pulled from the burning building. It sat outside underneath the trees for almost 30 years.

Although the story didn’t seem to point to prime raw material for a project, Chet was intrigued enough to call the uncle and ultimately buy the Dodge. To Chet, the truck’s warped and rusted condition seemed like permission to rebuild it with some custom modifications. He decided to turn the sad old survivor into a five-window pickup, built—like many customs are—as if the factory had thought of the idea first.

To achieve the vision, Chet extended the cab 12 inches and replaced the factory roof with the roof from a 1929 five-window coupe, filling the center with a section from a 1979 Chevy Celebrity. Below, the stretch was completed using the rear doors from a 1934 Dodge four-door sedan. The 1928 Pontiac rear fenders were widened 3 inches and dressed up with scallops from 1928 Pontiac front fenders. The front fenders were modified to match the curve of the rear fenders. A pair of 1948-1952 Ford F-1 running boards were selected for their ribs and modified for the Dodge. Other exterior mods include the Rootlieb hood, filled cowl vent, shaved front grille, shaved handles, hidden hinges, custom rear roll pan, and Harley-Davidson CVO Breakout mirrors.

The bed was entirely handcrafted from 12-gauge steel to match the factory specifications. The header panel and tailgate are from a 1956 Dodge truck, trimmed and shrunk to fit the bed. The floor planks were constructed of two layers of carbon fiber above and below a piece of high-density foam, covered with 12 coats of clear. The vivid red paint is Axalta (DuPont) Chromium Base LRN Viper Red sprayed over white sealer.

Chet added 2×5-inch boxing to extend the Dodge frame to match the body. He ran the fuel and electrical lines inside the frame using 1-inch conduit. The chassis combines a TCI Engineering independent front suspension and a triangulated four-link at the chromed Ford 9-inch with limited slip. RideTech ShockWaves were added front and rear. The wheels are 17×7 and 20×10 Knights from Foose Design Wheels, mounted with 245/34R17 and 275/40R20 Goodyear Eagle radials. A power rack steers the front wheels and Wilwood 12-inch disc brakes at each corner stop the Dodge.

A Hemi seems like the perfect way to power Chet’s Dodge hauler, and the 5.7L engine under this hood had previously powered a 2006 Dodge SLT truck. The Hemi’s modified exhaust combines ceramic-coated Sanderson headers, 2-1/2-inch stainless steel pipes, and a pair of MagnaFlow mufflers. The engine is backed up by a 545RFE automatic overdrive transmission.

Contemporary bucket seats were upholstered by Chet and his friends using dark gray leather with race-style belts. Chet constructed molds for the carbon-fiber interior panels built by Lee Skidmore of Northwind Composites. The panels were covered with 12 coats of clear to make them shiny like the paint. Classic Instruments gauges were installed in the center of the custom-built dash. The floor consoles houses the Lokar shifter, Vintage Air A/C controls, and tuner for the thumb drive stereo. Other interior amenities include touch-screen navigation, backup camera screen, power windows, push-button ignition switch, and a Billet Specialties steering wheel.

When the Dodge was finished in May 2017, Chet made a point of contacting the family who had owned the truck since it was new, inviting them to see the rebuilt five-window custom. Seeing their family truck beautifully redone brought back a flood of memories and tears to their eyes, he told us.

I dig how they include some pre-photos of the truck. Awesome transformation!