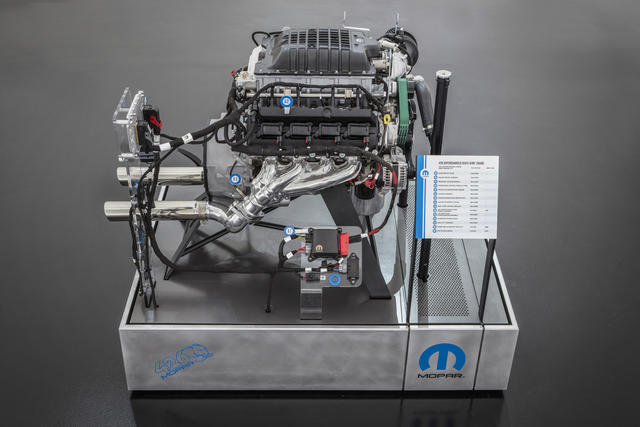 Mopar is celebrating HEMI Day (4/26) by unleashing pre-orders for the 1,000-horsepower "Hellephant" 426 Supercharged Crate HEMI Engine and Kit. Originally unveiled at the 2018 SEMA Show in Las Vegas last fall, the "Hellephant" is a Mopar-first for a 1,000-horsepower crate engine kit offered by an Original Equipment Manufacturer (OEM), paired with a stunning 950 lb.-ft. of torque.

“The reaction when we revealed the 'Hellephant' engine at the SEMA Show was just amazing, and the momentum continued after the show, with close to 1,000 people expressing interest in buying this engine,” said Steve Beahm, Head of Parts & Service (Mopar) and Passenger Car Brands, FCA - North America. “Power and performance are ingrained in our brand’s DNA, and there is no better time to open pre-orders of this 1,000-horsepower, supercharged engine than on HEMI Day.”

Pre-ordering information will be available through www.cratehemi.com. To celebrate the start of pre-orders, Mopar will share a video on the brand’s social channels that serves as a finale to the series of "Hellephant" teaser videos rolled out prior to the engine’s reveal at SEMA. The video will be posted and shared on the brand’s Facebook, Twitter, YouTube and Instagram pages.

HEMI Day, All Day
The annual celebration of all things HEMI, held on April 26 (4/26) in recognition of the historic 426 HEMI engine that debuted more than 50 years ago and ruled the street and track, will roar along throughout Friday.

Mopar will post special HEMI-engine-themed content on the brand’s social channels throughout the day, including an announcement from Mark Worman, star of the Graveyard Carz vehicle restoration show on the MotorTrend TV network. Fans can follow and share using special #Hellephant and #HEMIday hashtags.

The “Hellephant” in the Room
The Mopar “Hellephant” 426 Supercharged Crate HEMI Engine hits the magical 1,000 horsepower mark via bulked-up displacement, with 4.0 inches of stroke and bore specs at 4.125 inches. A supercharger with a high-efficiency rotor set is mounted on the all-aluminum block. The choice to use aluminum delivers significant weight savings to keep the “Hellephant” light.

The engine and kit’s distinctive “Hellephant” logo is a nod to the brand’s past and present, calling out the legendary 426 HEMI engine (nicknamed the “elephant” engine for its power and size), as well as the modern-day, 707-horsepower Mopar “Hellcrate” Engine, revealed at the 2017 SEMA Show

About Mopar
Mopar (a simple contraction of the words MOtor and PARts) is the service, parts and customer-care brand for FCA vehicles around the globe. Born in 1937 as the name of a line of antifreeze products, the Mopar brand has evolved over more than 80 years to represent both complete care and authentic performance for owners and enthusiasts worldwide.

Mopar made its mark in the 1960s during the muscle-car era, with Mopar Performance Parts to enhance speed and handling for both road and racing use, and expanded to include technical service and customer support. Today, the Mopar brand’s global reach distributes more than 500,000 parts and accessories in over 150 markets around the world. With more than 50 parts distribution centers and 25 customer contact centers globally, Mopar integrates service, parts and customer-care operations in order to enhance customer and dealer support worldwide.

Mopar is the source for genuine parts and accessories for all FCA US LLC vehicle brands. Mopar parts are engineered together with the same teams that create factory-authorized specifications for FCA vehicles, offering a direct connection that no other aftermarket parts company can provide. Complete information on the Mopar brand is available at www.mopar.com.

The "Hellephant" is absolutely the sweetest crate engine available.
Too bad it costs just as much as the truck I want to slide one into!


This happened so quickly that we're only just catching up with it. Mopar opened pre-orders on the 7.0-liter Hellephant Hemi crate engine on April 26, which is Hemi Day. According to Allpar, hubbub on social media not long after that day claimed Mopar had gone through all of its Hellephant stock. When Allpar asked Fiat Chrysler for clarification, a spokesperson e-mailed, "Given the high demand and the hand-built, time-intensive build process, we have closed preordering for the 426 Hellephant Supercharged HEMI crate engine. Based on preorders, the engine sold out in just two days. Customers can visit www.cratehemi.com to receive future information and updates on the 'Hellephant' engine."

No one is certain how many engines Mopar sold. Allpar wrote, "Industry insiders believe Mopar may be making around 100," but reiterated that it's a guess.

The engine and the ordering process have their peculiarities. Mopar Insiders explained that Tool Engineering International helped create the 426-cubic-inch block, and that the Hellephant engine "shares nothing except for displacement with the rumored upcoming 7.0-liter 426 Hemi V8." On the Hellcat.org forum, a poster wrote that the engines "can only be sold through a dealer and that the dealers can only order 1 engine per week."

The Hellephant doesn't come with Mopar's three-year, 100,000-mile warranty, either. During a press briefing last October, FCA officials said they weren't sure about offering any warranty. Based on the motor being given a part number starting with the letter P, there is a bit of protection, but it's a 90-day limited warranty covering "defects in materials or wokmanship," and only applies to engines not used in competition.

For those who didn't get the opportunity to drop $29,995 for 1,000 horsepower and 950 pound-feet of torque, the best bet is to hope for the return of Apollyon's pachyderm. Motor1 wrote that "Rumors hint at... another limited run scheduled for next year due to overwhelming demand." That's thin thread to hang a Hellephant from, but it beats bupkis.

Snap! They sold out of Hellephants in only 2 days. I'm sure they'll make more!