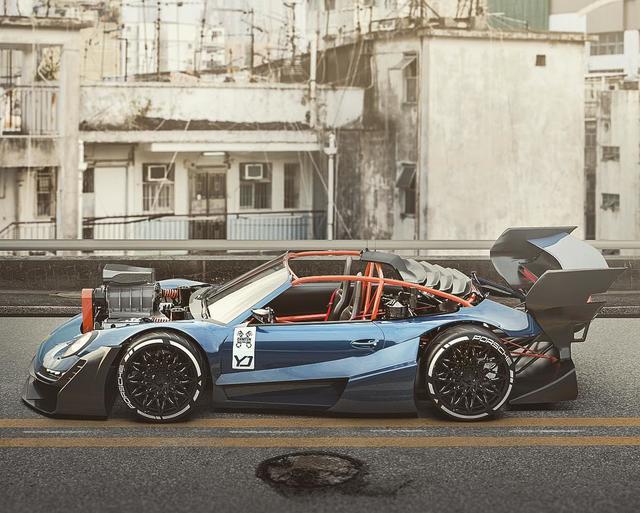 
File this one under modifications we'd never even imagine. French tuning company Danton Arts Kustoms revealed on Instagram it has a Hemi V-8-powered Porsche 911 in the works.

If that doesn't sound mad enough, there's a catch. The V-8 isn't going in the rear where the flat-6 engine once sat. Instead, it's up front. What possessed the minds at Danton Arts Kustoms to dream up this creation is far beyond our comprehension. Purists beware, the photos and renderings will not please you. Others, though, may find the Hemi-powered 911 delightful.

Since the rear of the car won't house an engine, the company has chopped it off. When complete, the car could look something like the renderings Yasid Design posted to Instagram. It somewhat reminds us of another peculiar Porsche 911 conversion going on: the Half11. For that project, Oil Stain Lab is carrying out the modifications, which will turn the 911 into something of a Formula One car with a standard front end.

The renderings of this project show a low stance with the engine protruding from a front end without a hood. The car also has massive tires and plenty of aggressive aero bits. The front splitter's look is balanced in the rear by a big diffuser and a giant wing. Of course, these are renderings of what the car could look like when all is said and done. It will take a lot of time and effort to get there.

The photos Danton Arts Kustoms posted show the 911 is nowhere near close to the look shown in the renderings, but they reveal the engine has been installed up front. Keep on keeping on, Danton Arts Kustoms, and we'll surely keep an eye out for the completed project.

I love the HEMI and the 911, but I'm not sure if I love them together.
Although, I also want to give credit to people putting in all the work.