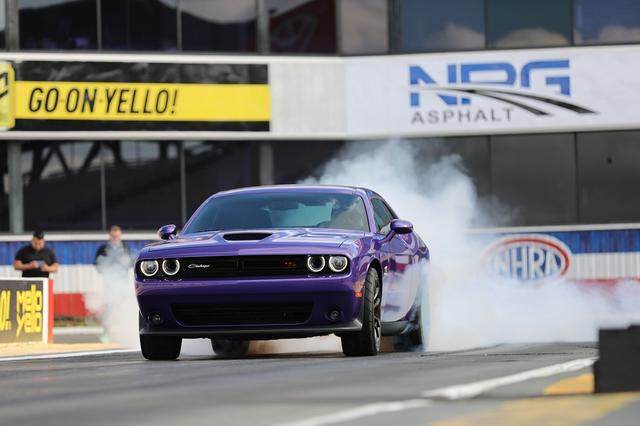 
Dodge just built an 11-second race car with a warranty. Here’s why this changes everything.

Vehicle manufacturers have learned in recent years that paying attention to the needs of niche customers pays off with handsome dividends. That goes not just for bleeding-edge electrics and hybrids but also performance machinery. Customers respond to cars like the Chevy Camaro ZL1, Dodge SRT Demon, and Ford Shelby Mustang GT500 by signing on the dotted line for a $700-, $800-, or even $1,000-a-month car payment, sometimes for as long as eight years. At the end of the month, you’ve either got that kind of cash sitting around or you don’t.

Some will claim that the price of a nicely equipped 2019 Dodge Challenger Scat Pack 1320—at $46,876 for the one we tested—is too high to be considered affordable, but here’s a reality check: the price of a brand-new, loaded 2019 Volkswagen Passat (pretty much the most boring new car anywhere) is $36,406. Reality check number two: new cars are expensive, even when they’re sleep-inducing appliances. (After adding the mandatory eight-speed automatic transmission, the cost of the 1320 package is just $3,995 over the cost of a standard R/T Scat Pack Challenger.)

But framing Dodge’s new gem as some sort of low-cost alternative to the terrifyingly quick Demon doesn’t do enough justice to the Scat Pack 1320. This rare kind of car is what happens when the right group of engineers, designers, and brass meet in a crystal-clear moment of clarity and do the right thing. Recognizing how its customers were using and modifying Hemi Challengers, Dodge took stock of the SRT parts bin, sharpened some pencils, and got to work shaping a car that will have far-reaching consequences for hot rodders for decades to come. In few words, what they came up with is essentially an SRT Demon, but without the 840hp Hemi. Though the 1320 was announced last July, limited availability in the press fleet forced us to hold off on our evaluation until now. Let’s take a look at the 10 reasons you’d be wise to buy a Scat Pack 1320…

If you take drag racing seriously, the first thing you’d do with any race car is find some sticky tires and purpose-built wheels. That typically means hitting the Summit Racing catalog or Tire Rack website and shelling out at least a grand (and for only two rims and tires, at that). The Scat Pack’s 1320 option includes specially developed Nexen SUR4G drag-spec 275/40R20 street-legal tires, which we found to be incredibly effective when we made test runs down the eighth-mile in Pomona. (Without the track’s timing lights on, we produced e.t.’s in the 7.5- to 7.9-second range, with a heat-soaked engine.) These tires are mounted on low-gloss black 20×9.5-inch forged wheels with a knurled bead seat to minimize tire slip when the tire pressure is reduced for competition (around 20 psi). We’ve already ordered a set of these super-sticky Nexen tires to test on our resident Hellcat. Look for a full report at a later date.

Slide behind the wheel of a 1320 Scat Pack, and you’ll think you entered an episode of The Twilight Zone. Down and just to your right is an innocent-looking button called “Drag.” Push it, and you’ve swallowed the proverbial red pill (if we’re allowed to mix cinematic metaphors). “Drag” instantly invokes all the goodies in Dodge’s electronic toolbox, from torque reserve, launch control, and line lock to adaptive drag dampers and transbrake. While technically the combination of several key features, having the button in plain sight with everything under one roof is a huge benefit, especially in the fast-paced world of the burnout box and staging beams.

Seasoned drag racers know that fast elapsed times aren’t always the product of more power, but better power management. Dodge’s torque reserve rips a page right out of the racer’s handbook with a higher-stall-speed converter and combines it with some clever software integrated into the car’s multiple body modules to launch the car more effectively. Torque reserve works in conjunction with launch control and the transbrake (more on this later) by managing fuel flow and controlling ignition timing to maximize power delivery and launch performance. Taken together, it’s the equivalent of a custom-built torque converter with valvebody mods and significant custom transmission programming. If we had to put a price tag on this with comparable aftermarket parts, software, and labor, it’s easily worth $1,500.

The Demon’s stronger 41-spline, extreme-duty halfshafts aren’t exactly needed at the 1320’s modest 485hp level; it’s more of a wink-wink, nudge-nudge from the engineers acknowledging that you’re about to bolt on a blower, cam, and heads, and that they don’t want to see you in the service department the next Monday after you’ve snapped an axle. Dodge has, for all intents, given you the most important “bolt-on” you’ll need as your power rises with increasing amounts of nitrous and boost. We put the value on the Demon axle upgrade at around $1,500.

Everybody talks a good game about setting up a stock-style rear suspension for sportsman level bracket racing, as witnessed by the multitudes of adjustable race shocks, coilovers, control arms, and data-logging hardware available to help the racer tune the typical sportsman-level bracket car. This equipment can add up into the thousands of dollars at the blink of an eye. That’s nice if you enjoy a track-side science project, but it’s a science project Dodge has already done for you with the 1320’s ADS.

Like the Demon’s suspension, this system electronically retunes the dampers in Drag mode, setting the front to full soft rebound/full hard compression and the rear to full hard (both compression and rebound). This optimizes weight transfer to the rear, affording the Nexen drag radials the maximum grip possible.

If there’s one feature that’s the poster boy for everything the Scat Pack 1320 stands for, it’s got to be the transbrake. There is no other earthly reason to need it, other than gapping the car in the other lane. That, and getting to the finish line first with “only” 485 hp. How quick is that? Dodge officially says 11.7 seconds at 115 mph in the quarter-mile. Drag racers have relied on transbrake technology for decades to take a huge bite out of e.t.’s, and it works through the diabolically simple principle of locking two gears against one another, then dumping the line pressure to one of the associated fluid circuits. The parts for a typical aftermarket transbrake kit for a simple three-speed automatic run between $400 and $500, not including the labor to install—and there’s a lot of rope to hang yourself if you get it wrong. When used with a sticky tire like the Nexen (transbrake is activated through the steering-mounted paddles), the effect is rather like getting hit in the rear by a Mack truck.

It’s nothing to roll your eyes about when Dodge says the 1320 comes standard with just a driver seat. This little favor will save the Scat Pack owner 114 pounds, worth almost a whole tenth of a second in quarter-mile e.t. Not much, you say? See how much you like losing a race by 0.09 second! The important thing to remember is you can buy the rear bench and the front passenger seat for just $1 each. When the seats are removed, the bare areas look far better than an interior with the seats yanked. Anybody with a stripped-down drag car knows the look, and unlike the 1320, it’s not a look that looks good.

This group ought to count as three separate features, but are so closely intertwined that we group them together for simplicity. Here’s where Dodge has leveraged its technology know-how to leapfrog beyond what the drag-racing aftermarket offers, figuring that if the hardware is already on the car and the computing power is already there, why not spend a few bucks and put it to work for the most nefarious purpose possible?

The line lock is just as you’d imagine, but with enhancements. In “Drag” mode, hit the “trans brake” button on the uConnect screen, push down on the brake pedal until at least 1,100 psi of brake line pressure shows on the driver display, straighten the steering, hit the “OK” button on the steering wheel, release the brake, and stab the gas. Once clouds of tire smoke billow from the rear, release “OK” and roll out. Burnout complete!

Launch Assist uses wheel-speed sensors to watch for driveline-damaging wheelhop at launch and in milliseconds modifies the engine torque to regain full grip. Launch control prevents tire slip during straight-line acceleration. Once again, the factory borrows its own stability-control sensors, software, and hardware to get this highly specialized job done. You can’t put a price on that, but a quality aftermarket line-lock kit would cost around $400 to install and makes a huge difference in getting consistent, repeatable hard launches.

9. It has a real warranty

Perhaps the biggest mental impediment to owners racing their daily drivers (besides the specter of breakage) is warranty service. Unlike the 1960s, where factory-package cars had disclaimers against racing—or sometimes no warranty at all—the Scat Pack 1320 has a 5-year/60,000-mile powertrain warranty that includes running down the dragstrip in unmodified form. Think they’re kidding? Dodge includes a one-year membership to the NHRA or NMCA, as well as membership in Dodge’s 1320 club (DodgeGarage.com)—a Dodge-sponsored online community of Scat Pack, Hellcat, and Demon racers who share performance data, e.t. slips, drag news, and technical information. You can get on the “leader” board, earn decals for achieving certain benchmarks, become an expert, or just brag to all your buddies.

10. An engine worth building

With the 6.2L supercharged Hellcat and Redeye Hemi engines (717 and 797 hp, respectively) getting all the attention, it’s the naturally aspirated, SRT-tuned 392 Hemi that is the bread and butter of Mopar performance these days. Now in its ninth year of production, the 392ci (6.4L) Hemi puts down 485 hp and 475 lb-ft of torque. If you think of it as a blank canvas for something even greater, you’ve got the right idea: with an indestructible block and a forged steel crank, the 392 is just a piston/rod swap and a blower kit away from Demon territory. Outside of the GM LS-series, no other current late-model V8 is better supported in the aftermarket, making it a great springboard for increasing power gradually over time. Even in unaltered form, an 11.7 e.t. at 115 mph is nothing to sneeze at, a feat that’s easy to forget when the factory is advertising 9s! To put things in perspective, the fastest Hemi cars of the 1960s were only good for 13s off the showroom floor. My, how far we’ve come!

It's such an amazing time to be following Dodge performance vehicles.