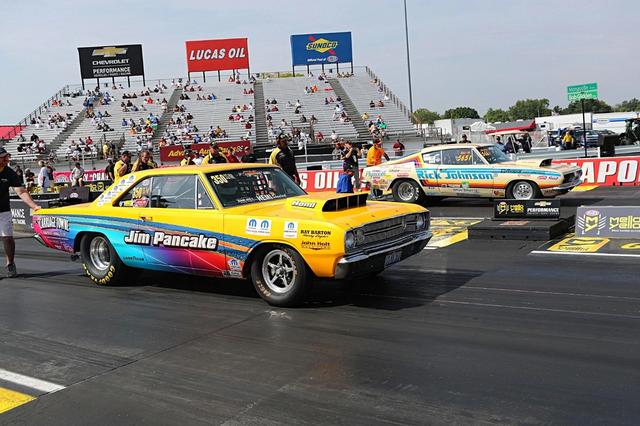 
It was the engine that rocked the world. It’s four simple letters instilled fear into the competition as it powered its drivers to championships along the NHRA drag strips and NASCAR super speedways. It has set records for well over 50 years and continues to this day. It may have been born during the height of the British Invasion, but the 426 HEMI® engine is as American as a Fourth of July fireworks display. Its thunderous exhaust tone and screaming intake noises (from sucking mass quantities of oxygen into its dual four-barrel carburetors) were a tell-tale sign when the 426 HEMI engine got unleashed.

Since Chrysler’s 426 HEMI engine was a double threat effort to win in both stock car and drag racing, unique engine packages were developed to suit the specific needs of the uniquely different racing sanctioning bodies. In the early years, NASCAR’s rules were quite different than those imposed by the NHRA and AHRA, who governed many of the nation’s drag strips in the 1960s. Both drag racing organizations required a minimum number of vehicles with the specific engine combination to be built in order to be deemed “legal” to run in the popular Super Stock classes. From lessons learned during the 426 Max Wedge program the year before, Chrysler’s engineers, led by the late Tom Hoover, quickly ramped up production of the 1964 Race HEMI “Package Cars” to satisfy both NHRA and AHRA. The Race HEMI engine, with its unique aluminum or magnesium crossram intake manifold, dual Holley carburetors and other cool go-fast goodies, was designed for the drag strip or, as the Chrysler sales literature would say, “supervised acceleration time trials.” Like the earlier 426 Max Wedge that powered Dodge and Plymouth intermediates (otherwise known as the “B-Body” to the Mopar® faithful), this platform with its generous engine bay would be a natural home for the all-new King Kong 426 Race HEMI engine.

As the 426 Max Wedge production concluded in early 1964, Chrysler began building their 426 Race HEMI Package Cars, code name A864. Sold strictly for off-road/non-street use, this engine was installed in the Dodge 330 and 440 trim levels while the Plymouth division installed the 426 Race HEMI engine in its Savoy and Belvedere models. To save weight, a large part of the front-end sheetmetal was replaced with much lighter aluminum counterparts (including the addition of a functional hood scoop), while other reductions in bulk included removal of the rear seat (sound familiar you Dodge Challenger SRT® Demon and 1320 owners?), using lighter front bucket seats, putting the battery in the trunk for better weight distribution to aid in traction, and deletion of other creature comforts such as the radio and heater to save a few pounds. Like the 426 Max Wedge cars, the 1964 Dodge 426 Race HEMI Package Cars were built in the Dodge Main Assembly Plant in Hamtramck, Michigan, while their Plymouth counterparts rolled off the Lynch Road Assembly Plant in Detroit.

So successful was the 1964 A-864 Race HEMI enigne that is was an all-Dodge final for the Super Stock Eliminator title at NHRA’s biggest event, the Nationals (now known as the U.S. Nationals) at Indianapolis Raceway Park. Roger Lindamood took his “Color Me Gone” Dodge to an upset win over the infamous Ramcharger racing team in basically the same car. Now the die was cast for the 426 Race HEMI as a proven championship engine.

With the success of the 426 Race HEMI engine in Super Stock for 1964, NHRA tried to reel the class back in. They disallowed the use of what NHRA deemed “exotic metals” so that eliminated the use of aluminum body components, but that didn’t stop the Chrysler race engineers. For 1965, the package code was now called A990 Race 426 HEMI and it was available in the Dodge Coronet or Plymouth Belvedere line. To shave weight, certain body panels, including the front bumper, were stamped from a thinner gauge metal and the new aluminum HEMI cylinder head casting and magnesium intake manifold were used to shave more weight off the front. Also, many of the same techniques to reduce interior weight on the 1964 Package Cars were incorporated on the 1965 A990 Dodge and Plymouth models. Like the 1964 Package Cars, the A990 Race HEMI engine came down the assembly line, but this time both the Dodge and Plymouth models were built at Lynch Road in Detroit. The tradition of dominating at the drags also continued for the A990 Dodge and Plymouth drivers during the racing season.

Eventually, many of the 1965 A990 Race HEMI Dodges and Plymouths morphed into the growing A/FX category, a precursor to the Funny Car class. Factory involvement in this class was short-lived, as not only were these cars dangerous due to the growing use of volatile fuels like nitromethane in their now injected HEMI engines, but the rudimentary safety equipment of the era put the drivers at extreme risk. Safety issues and the fact that the cars no longer resembled the factory showroom models Dodge and Plymouth dealers were selling further reinforced Chrysler’s decision to develop a more production-themed HEMI package car for 1967.

Known in the Mopar world as the RO23 (Plymouth Belvedere) and WO23 (Dodge Coronet), Chrysler’s product planners worked very hard with the race group in producing a Package Car that looked like a factory showroom model. Chrysler wanted their factory drivers such as Ronnie Sox and Dick Landy to park their injected HEMI A/FX cars, hang up their fire retardant nomex/aluminized driving suits and face masks, and jump in these RO/WO package cars for the 1967 season. The factory wanted these guys back in production-based cars. Unlike the earlier A864 and A990 426 HEMI Drag Package cars, the 1967 RO/WO was much tamer. The 1967 had basically a warmed-over 426 Street HEMI engine under the production steel with a lightweight hood scoop to direct fresh air into a pair of Carter AFB carburetors. Slight measures were taken to reduce weight, such as removal of sound deadening and insulation. Like the previous Package Cars, a four-speed or automatic transmission were available and to keep cost down, the RO/WO cars were also built on the line at the Lynch Road Assembly Plant in Detroit. Chrysler was hoping these cars would be a runaway success, but the ever-changing rules imposed by NHRA and AHRA were handicapping the car’s true performance potential. Both Sox & Martin and Dick Landy did score some victories in 1967 banging gears in their RO/WO Mopar vehicles.

It’s been called the Mother of all Mopar 426 HEMI Package Cars: the 1968 HEMI engine-powered Super Stock Dodge Darts and Plymouth Barracudas. Many Chrysler folks said it couldn’t be done, but the race group, under Tom Hoover’s leadership, made it happen. The Darts began life as a GTS model while the Barracuda was coded for Formula S trim level. Partway during the assembly process at Dodge Main in Hamtramck, the cars got pulled off the line and sent over to an offsite modification facility run by Hurst. Here, the cars went through a labor-intensive step-by-step modification processes prior to completion. This major undertaking included modification to the engine bay to accept the mammoth 426 Race HEMI engine, trimming the rear wheel wells for tire clearance and removal of unnecessary weight, which included deleting the rear seat, radio and heater in the interior. The biggest diet came in the use of fiberglass fenders and a lift-off hood with a massive scoop molded in (this being the inspiration for the Challenger SRT Demon scoop design). The HEMI Darts and Barracudas still required finishing, including getting painted by their owners as the body panels were in primer and gelcoat. Regardless, the HEMI Darts and Barracudas began winning major races, including the prestigious NHRA U.S. Nationals in 1968, 1969 and 1970. Today, these cars are still heating up the quarter-mile thanks to the hardcore racers who compete in the annual Dodge HEMI Challenge.

The DNA of the Factory HEMI Drag Package Cars of the 1960s still lives on in the 2020 Challenger Drag Pak. It carries on the commitment from Dodge and Mopar to provide racers a turnkey, factory-engineered, HEMI engine-powered drag machine that’s ready for the strip. This also includes the impressive track record of previous Challenger Drag Paks that have won NHRA championships and set new class records. If history repeats itself, and we’re sure it will, the new Challenger Drag Pak will continue the proud legacy of its legendary and highly sought-after 426 HEMI forefathers of the 1960s.

A belated Happy HEMI Day to everyone! All hail the mighty Elephant 426 HEMI.