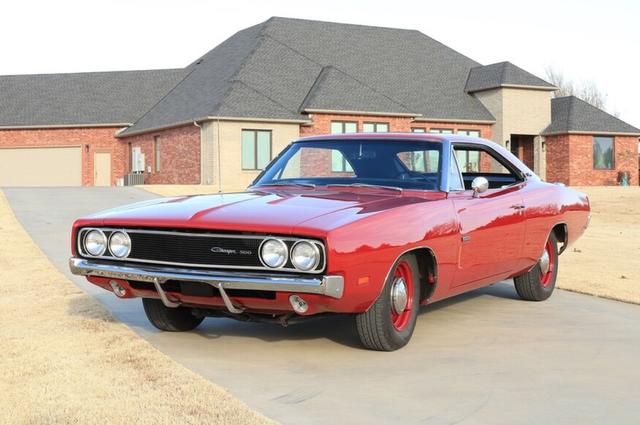 
I met Lynn Lamb in 2017 when I traveled to Harold's Hot Rod Shop in Enid, Oklahoma, to shoot tech for Classic Trucks on a 1986 Dodge Ram Harold was putting the finishing touches on.

Lynn owns a warehouse next door to Harold's Hot Rod Shop, and he likes to wander over and checkout Harold's latest projects. Lynn and I started talking Mopar fun facts while I was photographing tech, and he mentioned he owned a 1969 Dodge Charger 500 with a Street Hemi in it. I stopped what I was doing and asked Lynn to tell me more.

In 1967, Lynn's buddy, the other half of their two-man hell-raising team, bought a used 1965 Plymouth Hemi Belvedere with a four-speed and deep 4.56 gears. Specialists in depressing 427 Ford and 427 Chevy owners foolish enough to race from a green light, the two tore up the streets in the Hemi Belvedere.

Fall came, and it was off to college; the pair parted company, Lynn attending the University of Oklahoma and his buddy Oklahoma State. A few years later, on New Year's Eve 1972, Lynn's buddy blew into town driving a 1969 Hemi Charger 500, one of 17 with a TorqFlite. The hell-raising started all over again, and Lynn got the bug to buy a Dodge Charger 500 with a Street Hemi under the hood.

Out of the 392 1969 Dodge Charger 500s built toward satisfying the 500 cars needed to meet NASCAR homologation rules, only 15 Dodge Charger 500s were made with a Street Hemi and A833 four-speed stick transmission. So chances were slim that Lynn would find one. One day, he popped into a Quickie Mart for a snack and picked up the latest Auto Trader, and bingo! There's a 1969 Hemi Charger 500 in Altus, Oklahoma, that a couple of kids were trying to campaign at the local dragstrip. A lab experiment of sorts, the kids stuffed in a Racer Brown solid lifter cam and screwed up the firing order when they stuck the plug wires back on. In addition to running like crap, the Charger 500 was a victim of hail damage while it was a brand-new car sitting on a Wichita Falls, Texas, Dodge dealer's lot. The kid told Lynn he got a pretty good discount when the Dodge dealer sold him the Charger cheap because of the hail damage. At about twice what the kid paid new Lynn shelled out $6,500 and thought at the time that he had overpaid.

The '69 Hemi Charger had a shade over 11,000 original miles when Lynn drove it home from Altus. One day in early spring, Lynn was driving the Hemi on Oklahoma City's Crosstown Expressway, better known as I-40, when a terrible knocking sound arose from deep within the Hemi Charger's oil pan. Lynn had the Charger towed home and buried the car way out of sight for almost a decade, hidden behind giant barrels of boiled linseed oil.

Ten years later, Lynn pulled the Hemi's oil pan and confirmed the engine spun a rod bearing on cylinder No. 6. The crankshaft was repaired by Moritz in Tulsa, Oklahoma, and the No. 6 con rod was replaced. Lynn overhauled the low-mileage 426 Hemi and dropped it back in the Charger. Back in mothballs the Charger went, soon after firing up the engine to make sure it ran OK. The year 1998 rolled around, and Lynn found himself hassling with tube headers and finding a starter motor compatible with tube headers. From 1998 until Lynn started visiting Harold's Hot Rod Shop, the Hemi Charger 500 was a weekend street warrior, accruing enough miles to flip the odometer past 15,000 miles.

To Lynn the Charger's hailstorm damage was akin to a pretty girl with pizza face acne. He says he wanted to "smooth the dents and remove the rust; this is where Harold's Hot Rod Shop got involved." Sometimes a shop name can be a little deceptive. It's true Harold's Hot Rod Shop is involved with painting and building hot rods, but the shop's reputation for award-winning bodywork and paint led to classic cars destined for the Pebble Beach Concours lining up for work.

Harold's crew sanded the Charger 500 down to bare steel and metal-finished the hailstorm damage. To reverse the effects of rust holes in the rear quarter panels, grafting matching-gauge sheetmetal rendered the repaired areas undetectable. Factory-coined as Scorch Red, the paint code for Lynn's Hemi Charger 500 is R6; the PPG paint was sourced locally in Enid, from Randy Nunley's Carter Paint Company. The repainting process started with PPG DTM (Direct to Metal) primer and concluded with a PPG clear urethane topcoat. Then another month's worth of time was devoted to a color sand and rub—all the way up to color sanding with 8,000-grit sandpaper before the polishing wheel hit the surface. Lynn's 1969 Dodge Hemi Charger 500 came from the factory sans Bumblebee stripe.

To qualify for NASCAR as a stock production car, homologation rules required 500 automobiles had to be available for the general public to buy. The 1969 Dodge Charger 500 arrived, and although the aerodynamic improvements incorporated in the special design picked up 3 to 7 mph, it wasn't enough. Breaking it down, the production run for the 1969 Dodge Charger 500 was 392 cars total with 32 powered by Street Hemis and the rest 440-inch wedge engines, most with TorqueFlite three-speed automatic transmissions.

Lynn's Hemi Charger 500 has to be the plainest of Plain Janes that rolled out of Creative Industries conversion center. The only Hamtramck Dodge factory-installed options were a Mopar transistor ignition and an AM radio, and Lynn retrofitted the Tick-Toc-Tach.

The interior in Lynn's car is factory original with the exception of new headliner, carpeting, and door panels, all sourced from Classic Industries of Huntington Beach, California.