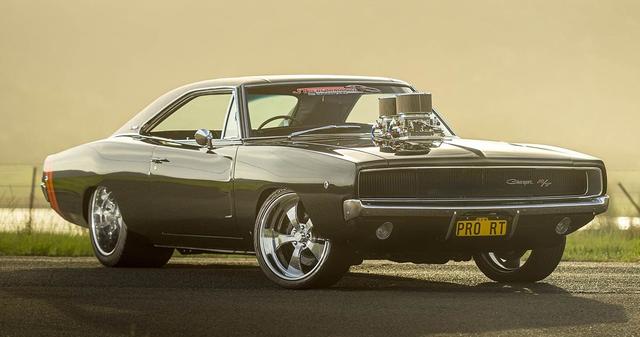 
If the next Fast and Furious movie takes place in Australia, Dom Toretto's got a great car at the ready. Buckle up.

No, this latest ride isn't Dom Toretto's new Charger for the next installment of the Fast and The Furious movie franchise. But you're definitely forgiven for thinking so. It's actually the product of Aussie Charlie Touma who had a HEMI motor from a 1970 Dodge Dart but was looking for, in his words, "a race car...[and] a proper muscle car" all in one. And what better car to do that in than a 1968 Dodge Charger R/T?! Let's check out Charlie's labor of love and what makes this wonder from down under so unique.

Charlie started his search for a suitable candidate and got lucky with a bone straight 1968 Dodge Charger. The first thing he did was yank the 440 motor and drivetrain and begin extensive fabrication and customization. According to Charlie just about everything was redone.

Charlie hired JT Performance to get the nose heavy Dodge to turn, stop, and handle better than it came from the factory. They started with a Magnum Force front clip, six piston Wilwoods up front, four pots out back, a four link rearend setup and massive amounts of bracing and strengthening to handle all the power from the massive HEMI.

The HEMI was completely gone over for driveability on the street while still making maximum power. Charlie didn't want to go the forced induction route so that required some thought. He started with custom Diamond pistons, Argo steel rods, and an .840" lift cam! Wow that must be some lope on the street! It was also fitted with a race-spec Peterson dry-sump system, HRE sheet-metal intake, twin 1050 Holley HP Dominators, and ported Pro Stock Hemi heads. Backing it all up is a full manual control automatic TH400 courtesy of Al's Race Glides.

Custom extractors – with 2½-inch primaries – were hand fabricated with a full exhaust. BK Race Engines and Justin at Horsepower Solutions did the finishing touches and tune making the HEMI both insane and streetable. Sure, why can't you have both!? The final numbers yielded 1,100 hp on E85!

Since however Dodge never made an Aussie Charger, Charlie had to take care of that steering wheel and put it on the right - sounds wrong to me! - hand side. His crew got to work and did a custom RHD conversion with power rack a pinion steering. Extensive work had to be done to clear the headers and other underhood systems.

But the final product is truly a sight to behold and Charlie and his team are to be congratulated on a fine build. So if the next Fast and Furious movie takes place in Australia, Dom Toretto's got a great car at the ready. Buckle up.