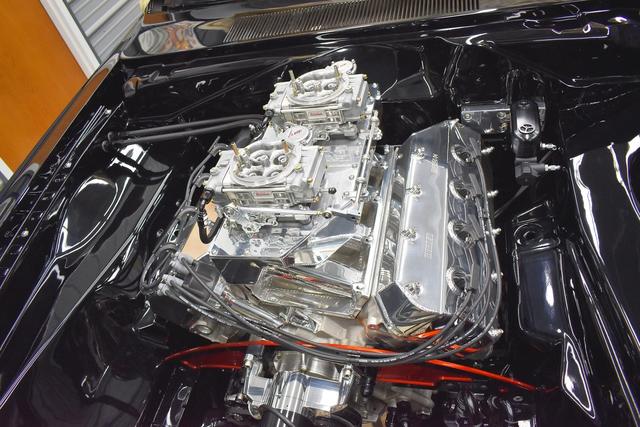 
Drag racing components are some of the strongest and lightest parts when it comes to engine building. They’re also some of the most expensive—that’s the bad news. The good news is that these parts and pieces can go onto lead multiple lives, or be used for multiple purposes, as is the case with Randy Golden’s street Hemi. While millennials are wondering how a guy can be an engine block, oldsters will remember the Keith Black aluminum block, RCD gear drive, and Childs & Albert connecting rods.

The idea behind Randy’s build was to combine “show” and “go” by creating a nostalgic street Hemi using old drag racing parts. Randy’s buddy Mike Roth at MR2 Performance would be helping with the project, and was able to find, build, or modify parts to give the Hemi that right look. Rather than build a 9,000-rpm drag racing engine, the team decided to go the street stump-puller route, which is usually a lot more fun to drive. Heck, at 10:1 compression, it even runs on junk gas.

Randy’s car is still under construction at this point, but the engine has already been run on the dyno, so they have some legit numbers. Eventually, the powerplant will propel Randy’s 1968 Hemi Dart down the town’s main drag at some high rates of acceleration, thanks to a whopping 730 lb-ft of torque and 804 hp. Not bad for some old and forgotten racing parts!

Block & Rotating Assembly
One of the most well-known names in drag racing history, Keith Black was the man to turn to for decades when it came to Hemi power. The block is an aluminum street version of the KB drag Hemis and is still very stout. Bryant provided the crankshaft that swings the 572 ci around, while Childs & Albert supplied the rods, and Diamond forged the street-friendly 10:1 pistons. The combination is so mellow that Roth reported only 32 degrees of timing was needed to hit eight bills.

Valvetrain & Cylinder Heads
As if Mopar Performance Hemi heads aren’t legendary enough, these cylinder heads were massaged by engine builder extraordinaire Ray Barton before they found their way onto the engine. The solid-roller camshaft is also quite aggressive, as it’s designed to take full advantage of the head flow. A 55mm roller from Competition Cams was stuffed into the powerplant, which features a whopping 272 degrees at 0.050 inches on the intake, and 282 degrees at 0.050 inches on the exhaust side. The 0.700-inch lift camshaft bumps a set of Crower lifters, Smith Brothers pushrods, and Manley valves and springs.

Ignition, Induction & Exhaust
Roth and Golden wanted the look of an old-school Hemi (not just the parts) so he set up the 572 with a couple of 750-cfm carbs with no choke horns from Quick Fuel Technology. The carbs are mounted on a Hogan’s sheetmetal intake that takes polishing to a whole different level with a mirror-like finish. The air/fuel mixture is lit off by an MSD Pro Billet distributor and 6AL box, which attached to Moroso wires and Autolite spark plugs. Exhaust is sent out by a set of 2 1/8-inch to 2 1/4-inch stepped headers built by MR2 Performance.

While new HEMIs are great, nothing beats an ELEPHANT!