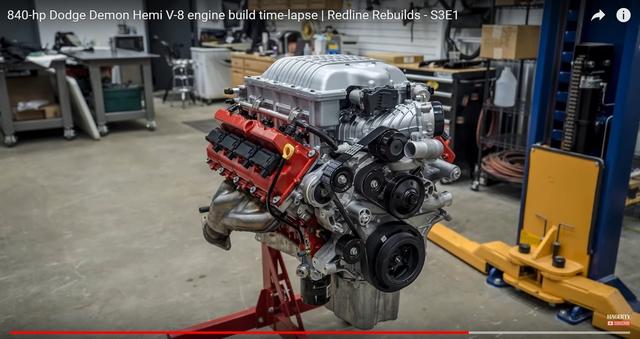 
Strap in for one hell of a ride, as the Redline Rebuild crew got their grimy hands on all the parts to build an 840-horsepower Dodge Demon engine.

The Dodge Challenger SRT Demon is to blame for more than a few daydreams. Hagerty’s resident wrench Davin Reckow is one of the many gearheads with greasy hands who wanted to know just how SRT engineers extracted 840 horsepower from the supercharged 6.2-liter V-8 under the Demon’s square hood (provided it’s burning 100-octane race fuel). And after taking it from a pile of parts to a fire-breathing monster, now he knows.

Dodge sent the engine in pieces, and the whole shebang arrived at our shop looking like a model kit from a drag racer’s fever dream. Except with a lot less glue. Davin certainly needed his torque wrench, though, as well as a special tool for the torque-to-yield bolts used throughout.

This modern powerplant differs from the classic engines that Davin usually assembles due to the use of these torque-to-yield bolts. In the video, you can see a special tool attached between Davin’s torque wrench and the socket to drive the bolts. Each fastener is tightened to a specified torque, then turned a set number of degrees further (example: 85 lb-ft plus 90 degrees).

“It was certainly different from the other builds we have done,” says Davin Reckow, Special Project Editor. “It was fascinating to see just how far modern engines have come, yet so much of the concepts are essentially the same. Especially when comparing parts against the Hemi we rebuilt in 2016.”

The pièce de résistance, of course, is the Demon’s monster supercharger. Is that what accounts for the sizable bump from the 707-hp Hellcat? It’s certainly part of the story. Seeing how the airflow comes from three intake sources the supercharger is now 2.7 liters versus 2.4 liters in the Hellcat, boost pressure is up to 14.5 psi from 11.6 psi, and the system includes two small chillers that use the air conditioning system to lower intake air charge temperature. The upgraded blower definitely makes a difference. But on top of that, the Demon revs 300 rpm higher that the Hellcat, uses two dual-stage fuel pumps rather than one, and contains stronger internals that make it capable of enduring the considerably higher power output.

Sit back, grab something cold to drink, and watch this speed Demon go together in record time. At the end, there is the bonus of hearing that massive supercharger at full whine. There is also a bit of tire smoke. OK, a lot of tire smoke.